Foley and McCullagh are the masters of Gowran Park 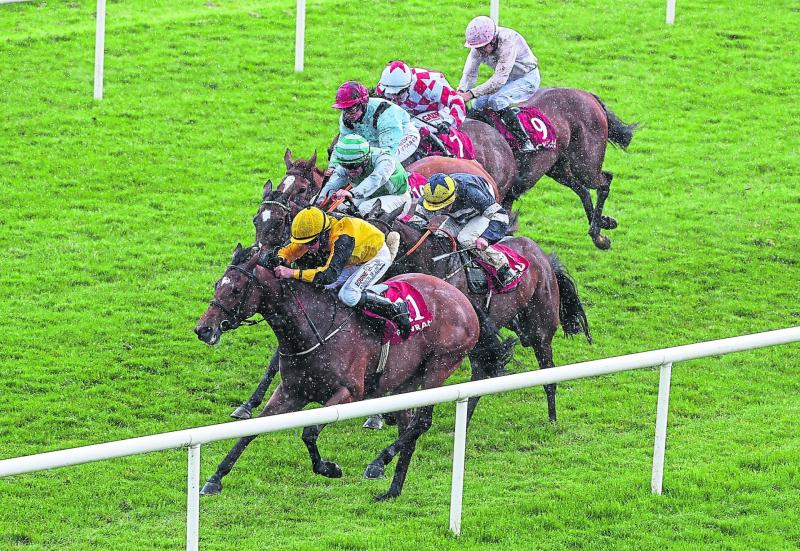 Despite losing an iron a furling from home, Niall McCullagh delivered a strong performance to win the fillies’ handicap on the John Murphy-trained Celtic Crown at Gowran Park. Picture: Caroline Norris

While Mac Swiney was to disappoint later on the card, Jim Bolger and Kevin Manning were winners early on the card at Leopardstown on Sunday where 13/8 favourite Eaglefield took the seven-furlong maiden.

The strong market leader held off the late runs of the Joseph O’Brien-trained Baldomero and Dermot Weld’s Emile Gray to win just four days after making his debut at Gowran Park.

Shane Foley and Jessica Harrington also made a return to the winners’ enclosure as Tauran Shaman landed the 10-furlong handicap. The 9/2 chance held off the late run of the Henry de Bromhead-trained Mosala by a neck.

Willie Mullins supplied 7/4 favourite My Sister Sarah for the Listed Tourist Attraction Mares Hurdle at Killarney on Sunday, but he won the race instead with the Brian Hayes-ridden Getaway Gorgeous which carries the colours of the Whitegrass Getaway Syndicate.

As the market leader could only manage third place, Hayes landed the spoils on the 11/2 chance which beat Declan Queally’s Western Victory by a length and a half.

Kilmanagh trainer Louise Lyons won the bumper with the Derek O’Connor-ridden Judicial Law, which is owned and bred by Michael Tobin. The 9/4 chance came with a late run and got up close to the finish to beat Thomas Coyle’s Morning Logic by a length and a half.

Shane Foley was among the winners again, this time at Naas on Saturday where he took the five-furlong handicap on the Andrew Kinsella-trained Mi Esperanza.

The success came easily enough and Foley was able to ease the 4/1 favourite right down in the final strides when beating the Pat Martin-trained Pretty Smart by half a length.

Jim Bolger and Kevin Manning kept up their good run with a game success for 9/2 chance Freedom Of Speech in the six-furlong conditions’ race.

Placed second on her two previous starts, she made all the running to beat newcomer Lopes Gold, trained by Jessica Harrington and ridden by Shane Foley, by three parts of a length.

Joseph O’Brien won the rated race with 11/1 shot Benaud which put in a very taking performance under Shane Crosse. On his seasonal reappearance, he raced to an impressive one and three-parts of a length success over the Aidan O’Brien-trained 9/4 favourite Baton Rouge.

Willie Mullins and his nephew Danny helped punters begin the day on a winning note with a couple of winning favourites in the opening two races at Cork on Saturday.

Farout, the 9/4 favourite, impressed with a 15-length romp in the opening four-year-old maiden hurdle while Manitopark Aa finally came good, at odds of 13/8 favourite, in the mares’ maiden hurdle.

Joseph O’Brien also supplied a winning market leader in the shape of Meticulous which won the three-mile maiden hurdle under JJ Slevin. Another 13/8 winner, he beat the Noel Kelly-trained Don’t Matter Now by four and a quarter lengths.

Jim Bolger and Kevin Manning recorded their first winner of the weekend as 16/1 shot Strapped comfortably landed the opening two-year-old maiden at Cork on Friday evening.

The son of Dawn Approach was far too strong for joint-favourites Amalfi Coast and Harmony Rose late inside the final furlong as he scored by two and a half lengths and half a length.

Mikey Sheehy rode his first winner for Dermot Weld when getting the 10/1 shot Hightimeyouwon home by a head from the Matthew Smith-trained Fil The Power in the seven-furlong handicap.

Weld was adding to his magnificent success with the Frankie Dettori-ridden Falcon Eight in the Chester Cup earlier in the day and this winner came in the colours of Newtown Anner Stud Farm.

Joseph O’Brien was the big winner at Gowran Park on Wednesday where the Capel Street Syndicate-owned Mighty Blue bounced back to form with a runaway success in the Listed Irish Stallion Farms EBF Vintage Tipple Stakes.

With Dylan Browne McMonagle in the saddle, the 6/1 chance eased clear of her rivals over a furlong from the finish to record a whopping seven and a half-length victory over the Henry de Bromhead-trained Lismore.

Jim Bolger supplied Wexford apprentice Willie Byrne with his first winner of the new Flat season - possibly the easiest winner he’ll ride all year - as he partnered Tejano to an all-the-way success in the fillies’ maiden.

The 9/2 chance never challenged as she romped to a six-length win over the Jessica Harrington-trained Pappina.

Amateur rider Hugh McOwan notched up his fourth success on the racecourse when scoring a last-gasp win in the bumper on the Denise Foster-trained Devil’s Cut.

Owned by Pioneer Racing, McOwan got the 9/1 shot got up in the dying strides to beat Musta Lovea Lovea, which had raced nicely clear turning for home, by a neck with the Willie Mullins-trained 13/8 favourite The Bandit six lengths further back in third place.

Foley gave Ger O’Leary his second success of the week when getting Princess Sela got up late on to land the seven-furlong handicap. The 13/2 chance came down the stands’ side rail to pip the Andy Slattery-trained 4/1 favourite Aingeal Dorcha by a neck.

The John Murphy-trained Celtic Crown scored by an identical margin under McCullagh in the featured fillies’ handicap over a mile, despite losing an iron a furlong from home.

The veteran jockey was in obvious distress in the latter stages of the race and did well on the 20/1 chance to fend off the late rattle of the Gavin Cromwell-trained Pachmena.

Dunnamaggin trainer Ray Cody won the opening division of the nine-furlong handicap with the Andrew Slattery-trained Bell Ex One.

The strong 9/2 favourite survived a stewards’ enquiry after beating the Joe Murphy-trained Overheer by a short head.

“I can’t wait to get him over a hurdle,” said a happy Cody afterwards. “I think that’s where his future is.
“He could make a smashing hurdler; he’s schooled already and he loves it. He’s basically not a Flat horse at all.”

Eoin Doyle and jockey Mike O’Connor combined to win the opportunity handicap hurdle at Ballinrobe on Tuesday evening with the 11/2 chance Listenheretomejack.

Owned and bred by Martin Walsh from Thomastown, the six-year-old got on top late on to deny the well-backed 6/4 favourite Brides Hill by half a length.

Kilmacow conditional jockey Hugh Morgan gave in-form Philip Rothwell the first of two winners at the meeting as he partnered Oscer Romero to a facile nine and a half length victory in the opening division of the opportunity handicap hurdle. The winner was returned at odds of 100/30.

Trainer Michael Butler won the handicap chase with Optical Confusion, owned by Corkman Anthony Coughlan. Ridden by Luke Dempsey, the 11/2 chance got into the race as a reserve and made the most of the opportunity to win by six lengths.