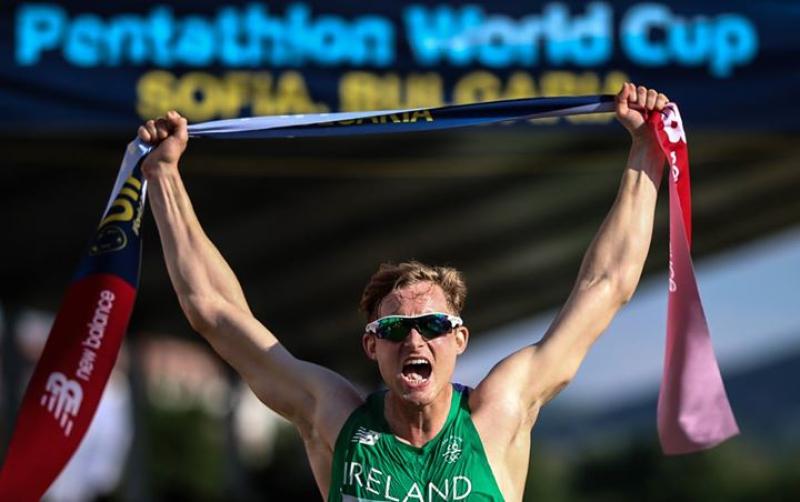 The Olympic dream is over for Arthur Lanigan O'Keeffe.
The Kilkennyman's hopes of flying the flag in Tokyo this summer were dealt a blow after injury ruled him out of the UIPM 2021 Pentathlon World Championships in Cairo and, with it, the chance to qualify for the modern pentathlon at the World Games.
The two-time Olympian was forced to make the tough decision after persistent injury problems ended with the diagnosis of a hip problem.
"I felt something was amiss during the first two World Cups of the season," he said in a post online. "I was completely exhausted and my legs kept breaking down 40 minutes into the fencing event.
"After numerous phone calls home explaining that I felt like I was in someone else’s body I decided to travel home and miss the third World Cup. I got bloods taken to figure out what was wrong, It turned out I had developed an autoimmune disorder. This was obviously a BIG shock, I could no longer train to the same level as my body needed time to recover and respond to the treatment.
"During this period I picked up a few niggles due to my lack of ability to recover but I didn’t think anything was too serious. I travelled to World Cup Final regardless as I only needed to pick up a few points to seal Olympic qualification. This unfortunately did not go to plan - one hour into the fencing I developed significant pain in my hip which proceeded to get worse and worse.
"After the event I could no longer walk or even take off my shoes. We had 48 hours until the remainder of the competition so we tried everything to ease the pain but nothing worked. I wanted to try the swim regardless but as soon as I dove in I couldn’t use my legs, from that moment it became apparent that something was really wrong and I had to pull out of the competition.
"Since then I have had an MRI and have seen the country’s top hip specialists. My worst fears came true, this was serious! I am unable to compete at the World Championships tomorrow or the Olympic Games this summer."
However, while Lanigan O'Keeffe may be down, he is not out. He is determined to make a full recovery.
"However tough this has been for me, sport has taught me how to be resilient and how to deal with setbacks. I am now turning my energy towards recovering my hip over the next six to 12 month period so I can hopefully come back stronger."
Lanigan O'Keeffe was a member of the Irish team who competed at the Olympic games in London in 2012 and Rio in 2016. A former European champion, he finished eighth in the modern pentathlon in 2016.