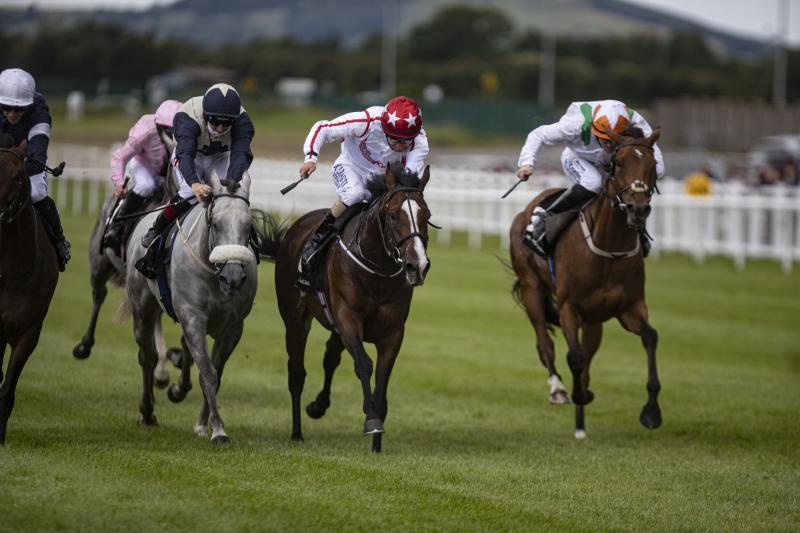 Velocidad began the run in the colours of the Owning trainer’s mother Annmarie, Declan McDonogh moving the exciting Gleneagles juvenile filly to dispute two furlongs out and she galloped all the way to the line to score in the Group 2 Airlie Stud Stakes.

Thundering Nights was extremely brave under Shane Crosse to oblige in the day’s feature, the Group 1 Alwasmiyah Pretty Polly Stakes, the daughter of Night Of Thunder refusing the yield to the seemingly inevitable to hold off Santa Barbara by a neck.

Niall McCullagh has been among the Over 50s booting home winners on all stages this year in Ireland and Britain and he judged the fractions to perfection on the Katy Brown-trained Effernock Fizz, who blazed a trail and never looked like being reeled in, with a length a quarter in hand at the finishing post in the Irish Stallion Farms EBF Ragusa Handicap. 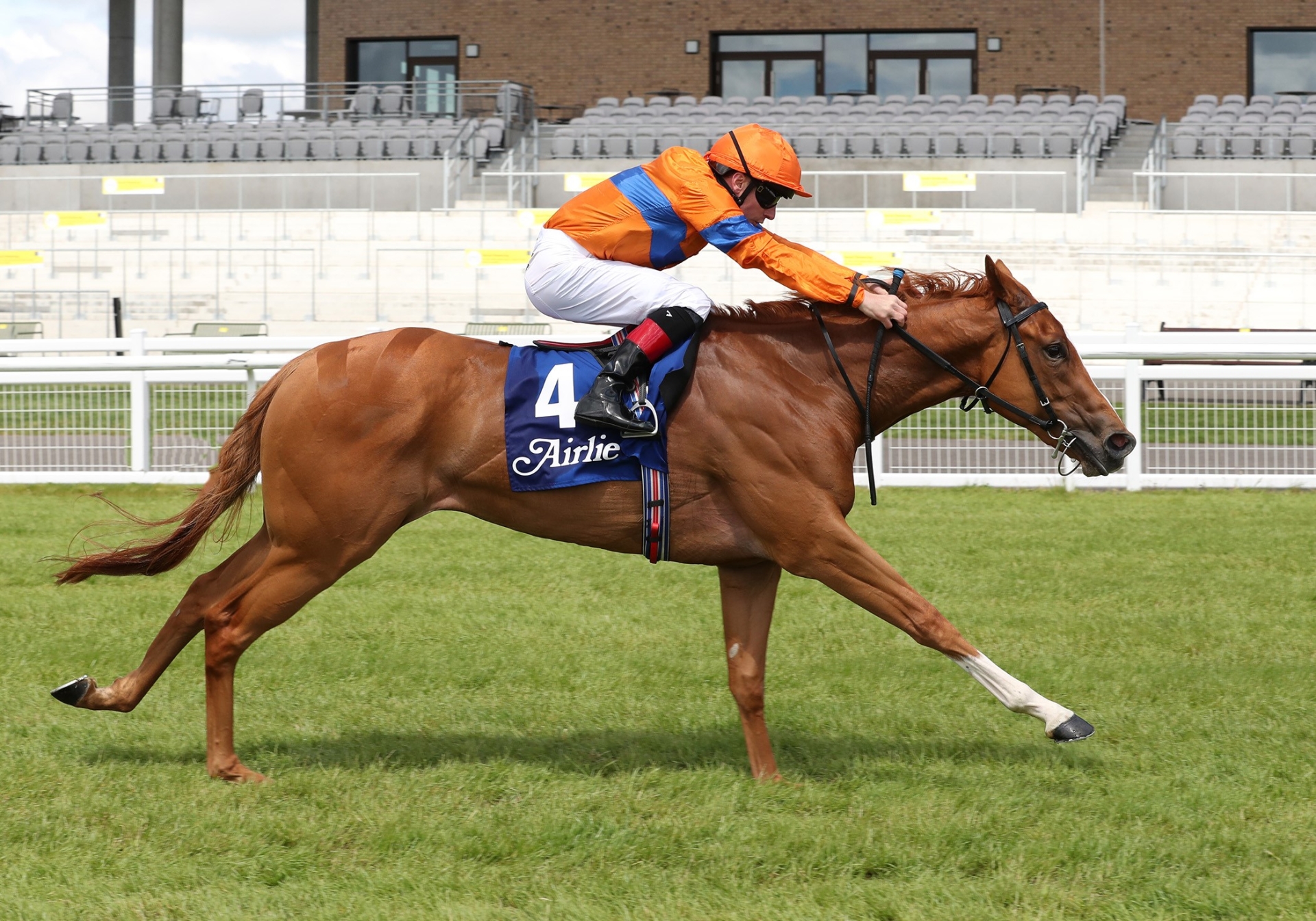 Shane Foley was excellent as Jessica Harrington produced a brilliant training performance for Cadillac to garner the Group 3 ARM Holding International Stakes on his first run of the season, and first attempt at ten furlongs at HQ on Saturday. The Lope De Vega colt certainly stayed the trip, coming from off the pace and steered through late-developing gaps by Foley, to just hold off Dawn Patrol by a short head, with two necks back to third and further in a thrilling finish.

The Foley/Harrington axis got on the board early in the Dubai Duty Festival at The Curragh on Friday with a sister of former Commonstown Stables star Alpha Centauri.

Discoveries was prominent throughout in the Irish Stallion Farms EBF 2yo Fillies’ Maiden over seven furlongs, and despite displaying plenty of greenness, stayed on well to nab it by a short head.

It would be unusual for Jim Bolger to leave the festival without a winner and he provided Luke McAteer with a big win in the Bord Na Mona Recycling Apprentice Derby, the Donegal rider using Beyond Happy’s staying power for an all-the-way triumph.

Seamie Heffernan scored in the feature event at Naas on Wednesday night, the Aidan O’Brien-trained Willow relishing the step down in class from failing to contend in the Epsom Oaks to land the Irish Stallion Farms EBF Naas Oaks Trial. Heffernan settled the well-backed, blue-bred filly in second but waited until the furlong marker before taking it up and seeing off La Petite Coco by a half-length.

Shane Foley is renowned as a strong rider but his judgement of pace was on view as the Jessica Harrington-trained Hamwood Flier made almost all the running to claim the seven-furlong Naas Racecourse Nursery Of Champions. Foley dictated proceedings when taking up the running before the end of the first furlong and kept enough under the bonnet of the three-year-old grey filly to find plenty in the closing stages and prevail by one and a quarter lengths.

Joseph O’Brien maintained his almost constant run of success by claiming the feature Irish Stallion Farms EBF Fillies’ Handicap with Merroir at Ballinrobe on Monday, providing star apprentice Dylan Browne McMonagle with a double on the day. The star apprentice sent the 3/1 joint favourite to the front and they drew clear along with Port Sunlight entering the straight, keeping on well to prevail by half a length.

The confidence in the Shane Foley-ridden Alice Kitty for the John Madden & Sons Claiming Race that saw Jessica Harrington’s daughter of Bobby’s Kitten sent off at 8/1 proved well justified as her pilot asserted in the closing stages having had initially roust her along off the home turn, to score by two lengths.

Secret Sea provided Mooncoin trainer Eoin Doyle with his first winner of the Flat season, having just been denied in a maiden hurdle at Wexford earlier this month. Billy Lee was on board as the daughter of Sea The Stars reverted to the level, reeling in long-time pacesetter Misty Millie at the furlong pole and triumphing by two and three-quarter lengths in the Gain The Advantage Series Handicap (Division I).