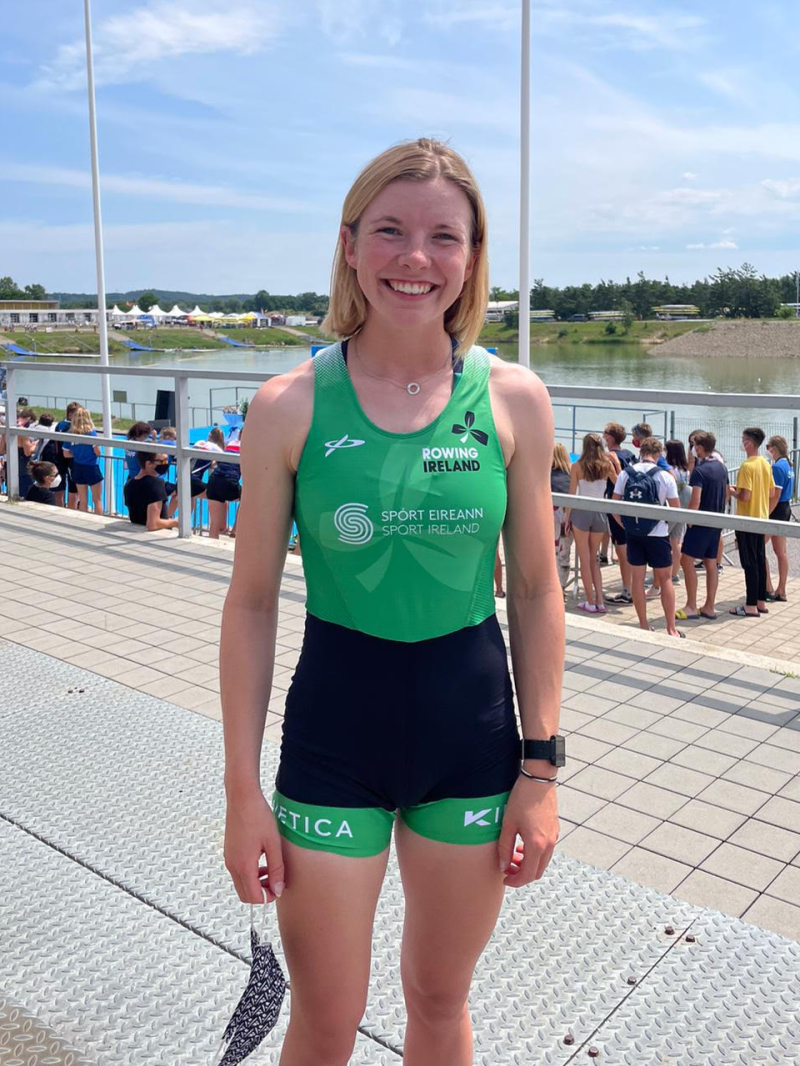 A local athlete from Leighlinbridge Cliodhna Nolan recently travelled to the Czech Republic to compete in the World under 23 Rowing Championships.

The regatta took place in temperatures upwards of 30°C in a small town called Račice, which is situated about an hour north of Prague.

Nolan came through the heats, and a repechage to a tough semi-final. Her performance in the semi-finals was arguably her best of the championship as it showed her fighting spirit to come in third, having battled every stroke of the race, and qualify for the final.

In the finals she put up an extraordinary fight to finish fourth - beyond all expectations, behind Italy, Greece and Russia.

Clíodhna’s grandparents are both from well-known Kilkenny families. Her Grandad, Michael Keogh from Michael Street in the city and grandmother Rita Nolan from the Sion Road. Michael worked for a number of years in the Kilkenny People with Kerry Keane before moving to Carlow to work in the Carlow Lodge Hotel.

Her story is a phenomenal one. She won a gold medal in the European U23 championships in 2020 in the lightweight women’s pairs with her partner Lydia Heaphy from the famous Skibbereen boat club.

Clíodhna has been coached by Dominic Casey, coach to the O’ Donovan brothers and countless Skibbereen children, and a man who has put a lifetimes work into rowing. In 2019, Nolan also competed at the same championships in lightweight double sculls in Florida, with Aoife Casey, daughter of Dominic, also finishing fourth.

Clíodhna rows out of NUIG boat club in Galway. When she was off the water she set up a makeshift gym with borrowed equipment in her house in Galway, and she relentlessly trained to set a series of new personal bests on the ergrometer. She only managed to get onto the water again when Covid restrictions lifted.

Nolan’s brother Oisín stood in as her coach in NUIG and kept her on track with early morning and evening training sessions 6 days a week helping her cover the kilometres needed to compete.  Oisín also a talented rower and former NUIG boat club captain only recently organised to take three NUIG crews to womens Henley in the UK.

All the while, she was studying for her third year Biomedical Science exams. The Leighlinbridge woman had to come through a gruelling selection program, which resulted in her going on a four-week training camp in Banyoles in Spain. Again, the training regime was intense and following the completion of the camp Nolan flew directly to Prague, while many of her teammates stayed on in Spain to continue their Olympic preparations.

Clíodhna, daughter of proud parents Marian and Dónal Nolan described their daughter's performance as 'a reflection of her years of dedicated training and determination’ and indicated that she will now focus on her college rowing for the next number of weeks before preparing for the All-Ireland rowing Championships in August in the National Rowing Centre in Cork. Clíodhna when asked what she enjoys most about her sport described ‘the magic of taking to the water on a flat calm winter’s morning just working hard to propel the boat through the water, with all natures’ beauty around you.’

This young lady is certainly a star on the rise.