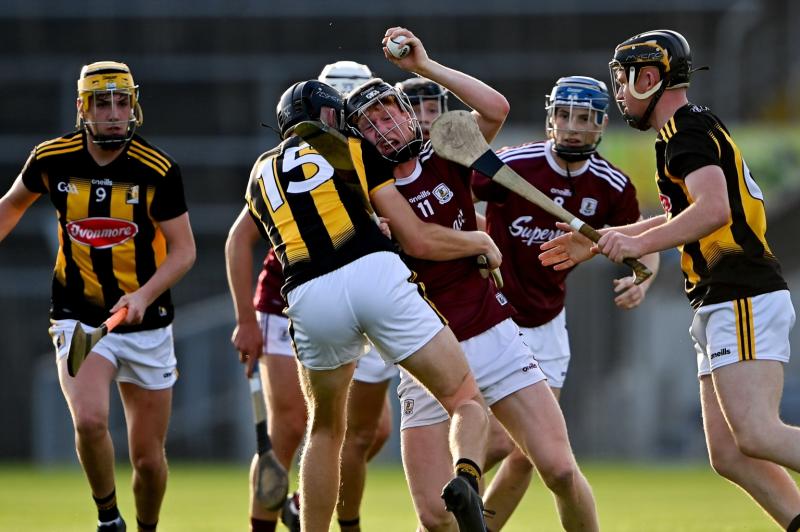 Galway's Michael Power is surrounded by a couple of Kilkenny players during tonight's All Ireland semi-final. Pic: Piaras O'Midheach/Sportsfile

It was defeat at the hands of Galway once again for the Kilkenny minors as a powerful Tribesmen outfit had eight points to spare over the Cats in Semple Stadium.

Galway were always in control throughout the All Ireland semi-final clash and they now go forward to face Cork in next Wednesday's final in the hope of winning a fifth consecutive title at this level.

It could have been a different story had corner forward Danny Glennon netted in the opening minute when he hit the crossbar and while Kilkenny had a promising start, it was nothing they could build on as Galway eventually raced clear on the scoreboard to lead by six points at the interval.

Glennon did get a goal for the Cats at the beginning of the second half to get the gap back to two points but that only spurred Galway on and they dominated the rest of the game with Kilkenny only scoring once in the final quarter as some of the bigger players in black and amber failed to reach the heights of previous outings.

It's the fourth year in a row that Galway have ended Kilkenny's interest in the championship but unlike previous outings they can't have many complaints here with a very skillful Galway side eventually winning out on a 0-23 to 1-12 scoreline in the end.

For a full report on the game, see next week's Kilkenny People.