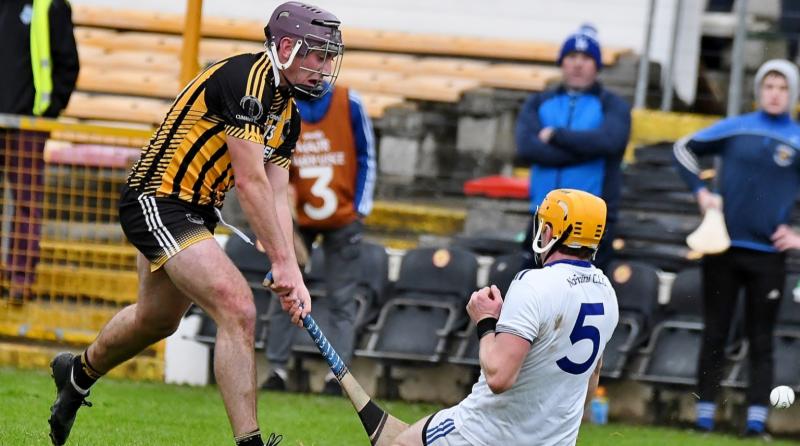 Two goals in a minute from Liam Hickey put the seal on an eight-point victory as St Lachtain’s (Freshford) got one over near neighbours Fenians (Johnstown) to reach the intermediate county final.

Lachtain’s repeated the league victory over Fenians but like that win a couple of weeks ago Fenians failed to see the game out with 15 men on the field.

Fenians had began the game in great style and went three points clear inside the opening 10 minutes.

Mark Webster got all his sides points at that stage including blazing an eighth minute penalty over the crossbar.

In such tough conditions a goal there would have changed the game considerably in Fenians favour. Instead the opposite occurred two minutes later when their indiscipline reared its ugly head after centre back Rory Phelan was given a straight red card after a wild pull on Liam Hickey.

Lachtain’s gradually took control in the game from that point on and while Fenians were gallant all the way through, playing 50 minutes with a man less was always likely to take its toll.

Helped by Hickey Lachtain’s overturned that early deficit to lead by two at the halfway mark of the half as they went into the break ahead (0-9 to 0-7).

The third quarter was a disappointing affair but once Hickey scored goals in the 50th and 51st minutes, the result was in the bag for a Lachtain’s side who have improved throughout this year’s campaign.

It turned out to be a game of two penalties with the first of Hickey’s efforts coming after joint captain Shane Donnelly was fouled in the process of shooting.

Fenians squandered a couple of late chances for goal that may have made things a little more exciting come the end but it’s still a result that they will look back on with many regrets.

On a tough afternoon for hurling, underdogs Fenians made the early running as they planned to go from victory in the relegation final in 2020 to a county final appearance only a year later.

Main score getter Mark Webster converted a brace of frees before they won a penalty after JJ Delaney was adjudged to have been fouled in the square.

Webster could only fire the ball high and handsome but even at that it looked a bright start as they led 0-3 to 0-0.

The bright looking start soon turned in the opposite direction after Phelan was dismissed though and Lachtain’s as a result sensed a huge opportunity.

Despite trailing by three points, Lachtain’s were always unlikely to let this huge chance slip by and they opened their account in the 14th minute with a James Maher point.

Willie Brennan then drilled over a score in reply for Fenians as the Johnstown side led 0-4 to 0-1 at the first water break.

Hickey and Webster then exchanged frees but Lachtain’s were up in arms as Shane Donnelly broke free of a couple of challenges to finish to the net. Unfortunately for them, referee John Kennedy didn’t play an extended advantage and they had to be content with a pointed free.

The missed goal opportunity didn’t wear them down though and three points on the bounce from Donnelly, Cian Dawson and Darragh Maher brought them level at 0-5 apiece.

Conor Tobin briefly edged Fenians back in front but the joy didn’t last long with Hickey knocking over a hat-trick of efforts to give Lachtain’s a two point advantage.

That turned out to be the margin by the half-time interval after Donnelly and Webster shared late points.

When the second period resumed Lachtain’s looked primed to kick on when Noel McGree extended his side’s lead to three points with a pointed effort from distance.

Fenians are a stubborn outfit though and despite all the things going against them they still refused to give up and back to back scores from Willie Brennan and Darragh Tobin gave hope that there was still a possible comeback on the cards.

Lachtain’s used corner back Criomhthann Bergin as the extra man in defence and despite getting the gap back to one, Fenians found it tough to work consistent good play. When Hickey and Dawson made it a three point game by the second water break, Lachtain’s were firmly in control.

Webster reduced the deficit with a 49th minute free but that proved to be Fenians last score of the game.
Hickey then took centre stage and after already registering five points, the centre forward plundered a quickfire double of goals.

The first via a penalty and the second a searing run towards goal.

One worry for Lachtain’s though was the fact that he had to go off injured just mere seconds after the second goal and his fitness will be a bit of a worry heading into the final.

Fenians had a couple of late opportunities but both Webster and Sean Tobin missed out on chances for goal and despite the tough conditions a tally of ten points was never likely to be enough for a county final appearance.

On the other hand it’s a great result for a St Lachtain’s side who will now appear in their first final since 2009 when they beat Dicksboro.