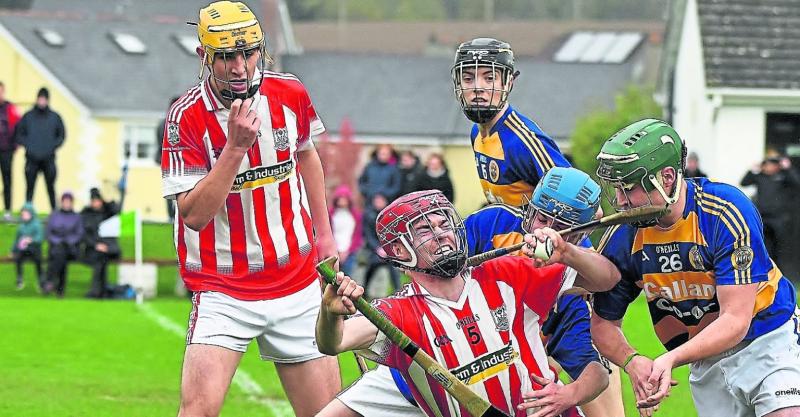 Young Irelands (Gowran) saved their best performance for the last game of the year as they brushed aside the challenge posed by John Lockes (Callan) to save their intermediate hurling status for another season.

The Gowran men were quick out of the blocks at a windswept and overcast Ballyhale on Saturday afternoon and led by 1-4 to 0-1 before the midway point of the first half, with the full-forward line of Chris Nolan, Sean Kehoe and Paul Kinsella causing the Lockes defence all sorts of problems.

Kinsella opened the scoring with a point from play within seconds of the throw-in. He then turned provider, setting up Kehoe for a superbly-taken goal in the ninth minute.

Chris Nolan also got in on the act with a 14th minute point, while Paul Holden and Sean Carey also contributed on the scoreboard during that dominant opening phase.

The Callan men were struggling but they were rewarded with a well-taken goal from Eoin Scriven in the 15th minute just before the water break (1-4 to 1-1).

That goal settled John Lockes. They held Gowran scoreless over the next 15 minutes while, in the process, they added points through Mikey Prendergast (free) and Ciaran Phelan to trail by the bare minimum with 21 minutes on the clock (1-4 to 1-3).

However, a huge moment arrived approaching the end of first half normal time, an incident which proved to be a major turning point - it was an element of good fortune that the Young Irelands men enjoyed.

Paul Holden stepped up to a long range free from midfield in the 29th minute. He got an even better return from his effort than expected as the sliotar sailed over the head of netminder Brian Doheny and dropped over the goal line (2-4 to 1-3).

The goal was a real game changer.

Another goal almost arrived moments later when Doheny denied Paul Kinsella, but a Paul Holden free in first half injury-time saw Young Irelands take a 2-5 to 1-3 lead in with them at half-time.

Paul Holden (free) and Owen McGrath exchanged points early in the second half but Young Irelands were in good form now, as points in quick succession from Sean Kehoe and Sean Carey helped them open up a seven-point gap by the 42nd minute (2-8 to 1-4).

It was a significant cushion in what was a low scoring game. The Lockes tried but failed to make up ground on their rivals, who continued to stretch their winning advantage for the remainder of the game.

They outscored their opponents 1-5 to 0-3 over the closing quarter, with the determination of Ted Drea deservedly rewarded for his industry with a well-taken goal.

Paul Holden kept the scoreboard ticking over as he added three further points from placed balls (he converted two frees and a 65) while the Carey brothers, Michael and Sean, also got in on the act.

It was the best performance of the year from Young Irelands. The Farrells, Seamus, Pat and the trojan-working Sean led the way, with Seamus in particular the outstanding performer on view as he gave an exhibition at wing-back.

Pat Farrell was magnificent at corner-back throughout. Michael Walsh was rock solid at full-back while Jack Brennan performed well on his return from injury.

Intercounty senior Michael Carey, playing at centre-forward during the first half, added strength to Gowran’s attack. In the second half he switched back to more familiar territory of centre-back, where he provided extra protection in nullifying the influence of the John Lockes attack.

Sean Carey and Paul Holden played their parts also, while the focal point of the attack was the towering Sean Kehoe. He scored 1-1 and was a constant handful throughout.

After a four-year stay in the intermediate ranks, John Lockes return to the junior grade, where they know they face a tough task if they are to win that championship next year.

Owen McGrath and Adam O’Sullivan led the way for the Callan men while Shane and Ryan Bergin, along with Graham Gohery and the hardworking Robert Kerwick tried their utmost on a day which ended in disappointment.