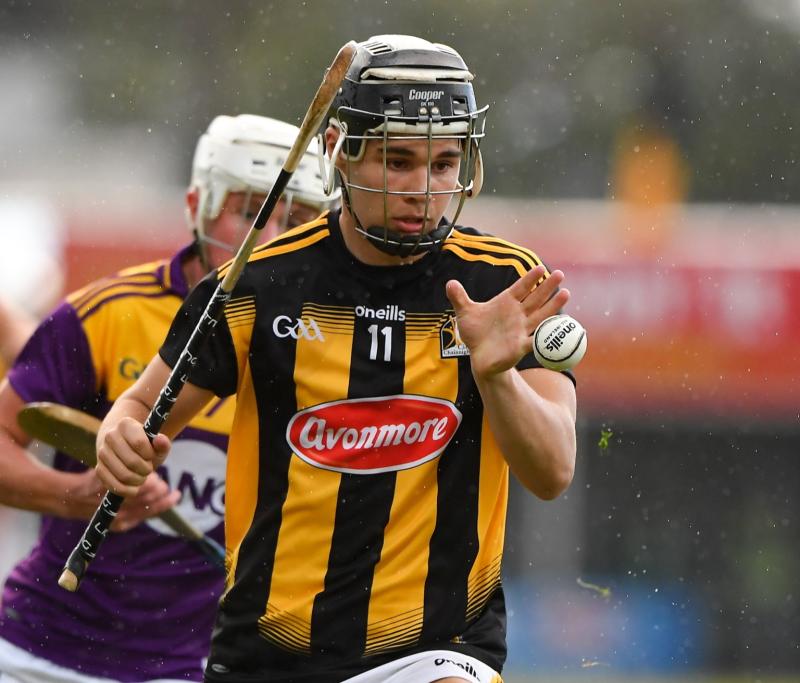 A draw was a fair result in this thrilling Leinster College’s Senior A Hurling Championship game which was played at the Good Counsel Grounds, New Ross on Wednesday afternoon. Weather conditions can be challenging at this time of the year, but on this occasion the players could have no complaints about the elements. A sticky pitch, though, was challenging for the players.

These players know one another very well over the years, as many have been colleagues on various Kilkenny underage teams. Friendships were pushed to one side though as the teams battled bravely for supremacy. In the end a draw was a fair outcome.

Good Counsel were missing the injured Danny Glennon and they landed the first point through the impressive Eoin Lyng. Kieran’s responded with a brace of pointed frees from Harry Shine and thereafter the Kilkenny school dominated the opening quarter.

The impressive Donagh Murphy landed two good points from play for Kieran’s with Harry Shine pointing another free, but they missed a number of further scoring chances to extend their lead. Elusive corner forward Cillian Byrne scored a second point for Good Counsel to see them trail Kieran’s 0-5 to 0-2 at the first water-break.

The tempo and intensity grew in the second quarter with Good Counsel enjoying a lot more possession during that period. They made good use of that possession with Jack Redmond (free), Michael Dundon, Eoin Whelan and Peter McDonald levelling the game after Harry Shine had pointed another Kieran’s free.

George O’Connor edged the New Ross college ahead with a great point, but it all square at half-time when Tommy Phelan pointed for Kieran’s.

Despite the testing underfoot conditions the hurling in the second half was top class. Both teams worked well to play the ball through the lines to a better placed opponent and this resulted in some excellent scores.

Kieran’s made the best possible start to the second half when Donagh Murphy flicked the ball one-handed to the net after winning possession for the game’s opening goal. Tullogher’s Lar Murphy responded with a point for the home side one minute later after a wayward Kieran’s defensive clearance.

There was a touch of good fortune about Kieran’s second goal team minutes into the second half. A Good Counsel defender appeared to be harshly penalised for overcarrying the ball, but credit to Harry Shine who stood up to the free and when he spotted just two defenders on the goal-line his thirty metre effort somehow sneaked into the back of the Good Counsel net.

That goal gave Kieran’s a five point lead and put them in a strong position. Good Counsel needed an immediate response and they got it with a brace of Jack Redmond points to reduce the margin to three points at the second water-break.

Those scores saw the pendulum swing towards the New Ross college and they scored three points without reply at the start of the fourth quarter through Eoin Lyng (2) and midfielder Michael Dundon to tie the game.

Ben Whitty, who impressed when introduced by Kieran’s at the interval, pointed  sixty-five to edge his team ahead once again, but that lead did not last long with Mullinavat’s George O’Connor pointing for the home side after some delightful cross-field passing among a couple of players.

With time ebbing away Kieran’s went on the attack once again and when Harry Shine won possession in front of his marker to score, the Kilkenny school looked to have shaded the result.

But there was one final kick in the Good Counsel lads as Lar Murphy pointed despite being under strong pressure. That score was a fitting finale to a great game with a draw a fair result at the finish.

Bill Hughes, Joe Fitzpatrick and Paudie Lennon stood out in the Kieran’s defence, with Donagh Murphy, Harry Shine, Killian Doyle and sub Ben Whitty to the fore further up the field.

Kieran’s have now played their two round-robin games and they hold a plus twelve points advantage over Good Counsel with the New Ross college due to play St. Peter’s in the near future. A winning margin of more than twelve points in that game would see Good Counsel top the group with Kieran’s finishing in second place.

With one game yet to be played in the other group, it is likely that Kilkenny CBS will finish second with Coláiste Eoin topping that group if they get at least a draw against Dublin South Schools in their final game. The Leinster semi-finals are scheduled to be played towards the end of January.