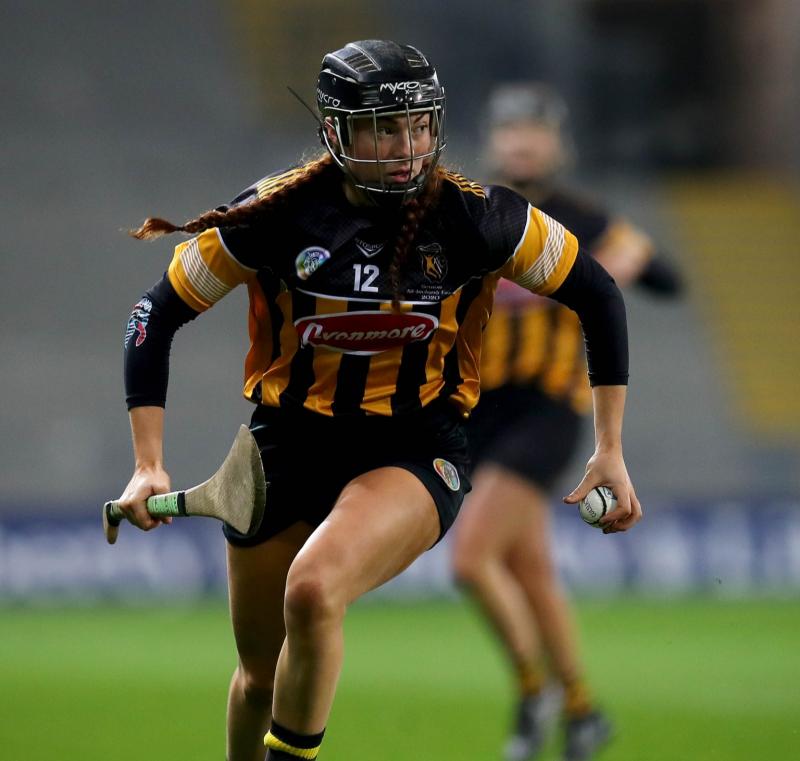 Camogie star Aoife Doyle was honoured at the recent Irish Times / Sport Ireland Sportswoman of the Year Awards for her player of the match performance in the All-Ireland final of 2020.

Doyle’s display in the Kilkenny attack against Galway helped the county end a run of three successive final defeats and earned her the Sportswoman of the Month award for December. The first of her four points, which made her the top scorer from play, was a superb effort over her left shoulder while running away from the posts. However just as valuable was her tireless work-rate, as she harried and hassled the Galway defence for the duration of the game.

This year however it was jockey Rachael Blackmore, the first female jockey to win the Aintree Grand National, who was crowned The Irish Times / Sport Ireland Sportswoman of the Year for 2021.

In what was an outstanding year for sport, but particularly for Irish sportswomen, Blackmore recorded several historic firsts over a three-week period In April she steered home 11/1 chance Minella Times to win the world’s most famous steeplechase by six and a half lengths, the first woman to do so in the race’s 172-year history. Just a few weeks earlier the 32-year-old had become the first female jockey to claim the leading jockey title at Cheltenham as well as the first woman to win the Champion Hurdle, this time on board Honeysuckle, with whom she has established a winning partnership.

Accepting the award in person at the ceremony in Dublin, which was streamed online, Blackmore described winning the award as being really special. “It’s been such an incredible year for sport and particularly for women in sport. To be nominated is fantastic but to win an award like this, it’s so special, it really is. When you look at the people you are up against and their achievements. It’s hard to comprehend that you’ve come out on top of that, it’s unbelievable.”

The nine include Kellie Harrington, who became only the second Irish woman to win a gold medal in boxing, Aifric Keogh, Eimear Lambe, Fiona Murtagh and Emily Hegarty, who won bronze in rowing, the first Irish women to win a team Olympic medal, Katie-George Dunlevy and Eve McCrystal, who won two gold and one silver Paralympic medals in track and road cycling and swimmers Ellen Keane and Nicole Turner, who won gold and silver medals respectively at the Paralympics.

The trophy was accepted on behalf of Team Ireland medallists Tokyo 2020 by Eimear Lambe and Ellen Keane at the online awards ceremony.

Paying tribute to all the 2021 winners, Sports Editor of The Irish Times Malachy Logan said the unparalleled performances by Irish sportswomen in 2021 captivated the Irish public throughout a year when they needed more than ever to have their spirits lifted.

“The inspiration these outstanding women and teams provide for the next generation of aspiring sports stars is invaluable. Not alone can they compete with the best in their sports, they also handle their success with a humility and modesty that speaks volumes for the coaches, partners, parents, and friends, who are an integral part of their success.”

Other recipients of the 12 monthly awards  include: golfer Leona Maguire, who excelled as the first Irish woman to represent Europe in the Solheim Cup – she went on win four and a half points; Vikki Wall who was player of the match in Meath’s stunning All-Ireland final victory over a Dublin team seeking their fifth title in a row; cricketer Amy Hunter who turned 16 on the day she scored 121 runs for Ireland against Zimbabwe in Harare, an achievement which made her the youngest player, male or female, to score a one-day international century; boxer Katie Taylor, who picked up her 15th monthly award; and Arsenal and Ireland international soccer star Katie McCabe.