Kilkenny SHL- Tullaroan come from behind to claim Shamrocks scalp 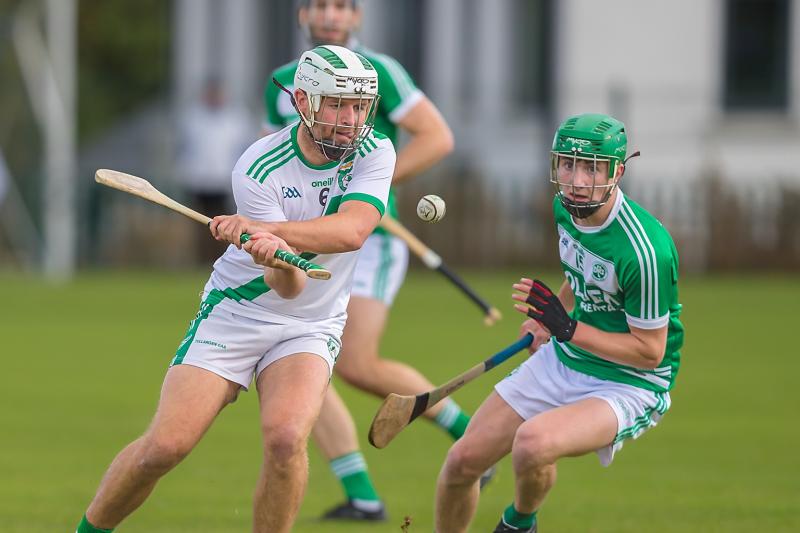 Padraig Walsh (Tullaroan) gets his shot away before Niall Shortall (Shamrocks) can intercept during their senior hurling league game in John Locke Park. Picture: Mark Desmond

In any discipline of sport, you would care to mention, there are those who would prefer a good start to a bad finish.

Conversely, there are those who would prefer a good finish allied to a poor start.

Shamrocks Ballyhale had a blistering start to their game in John Locke Park on Sunday afternoon when they totally bamboozled a very hesitant Tullaroan with a blistering opening eight-minute salvo of 1-5 before the Tullaroan lads had taken their initial breaths.

Such was the perfection of that opening score fest that there were those contemplating a quick exit, as the Tullaroan lads just couldn’t get their hands on the ball.

The goal was a delicious compilation of classic handling by the Shamrocks midfield and forwards before a brilliant tour de force between Eoin Cody and TJ Reid was nesting in the Tullaroan net, compliments of a vicious right-handed stroke by the latter.

Eight minutes later, A Shane Walsh free had narrowed the gap to six points with the Tullaroan lads gaining psychological purchase from some trojan work by Pauric Walsh, and his brother Shane who with Dylan Simpson, Mossy Keoghan and Gearoid Dunne were visibly more than disturbing the collective defensive talents of the famed Shamrocks rear-guard.

Before a further three minutes had cleared, three points by the excellent John Walton, Gearoid Dunne and Dylan Simpson had surprisingly narrowed the reigning champions’ lead to a single goal.

It was fiery, competitive stuff as Tullaroan stoically bent to the challenge presented.

Points by Mossy Keoghan, and three from Shane Walsh - two frees against a tough wind - had the winners up sides with the reigning County and Leinster champions with four minutes of the half remaining.

Points by Keoghan and John Walton forced the winners ahead by the 29th minute but two sweet TJ Reid points before the break sent the sides on level terms.

Tullaroan were the happier outfit, of that you can be assured.

One got a sense that the North Kilkenny lads were more than anxious to get on with winning a hurling game as soon as possible.

Gearoid Dunne, who had a super second quarter shot them ahead within three minutes of the restart.

TJ Reid nullified its value from a converted 65 within 40 seconds.

An inspirational point by Padraig Walsh - on Sunday’s performance is there a better number six in the county one is prompted to speculate?

Add in a brace of sweet points by Dunne and Walton and two frees by Shane Walsh - one of which was from at least 110 yards from the town goal - and you now have the picture of a rampant Tullaroan racing at break-neck speed for the line.

But typical Shamrocks were not for capitulation. It’s not in their hurling DNA.

A Brian Cody goal augmented by an Eoin Cody point had the Shamrocks back in the ball park by the 21st minute of the half.

With a point still between them entering the final four minutes, it was the Tullaroan outfit who went for the jugular.

Mossy Keoghan clattered two beauties; Shane Walsh got another brace, and THE Tommy Walsh (who made a glorious entrance) shot a single that was applauded by one and sundry.

This was a cracking game from the bell.

The sun was shining, the wind was blowing, John Locke Park was resplendent, the big crowd got more than value for their bucks, and hurling was top drawer.

What more would you want?