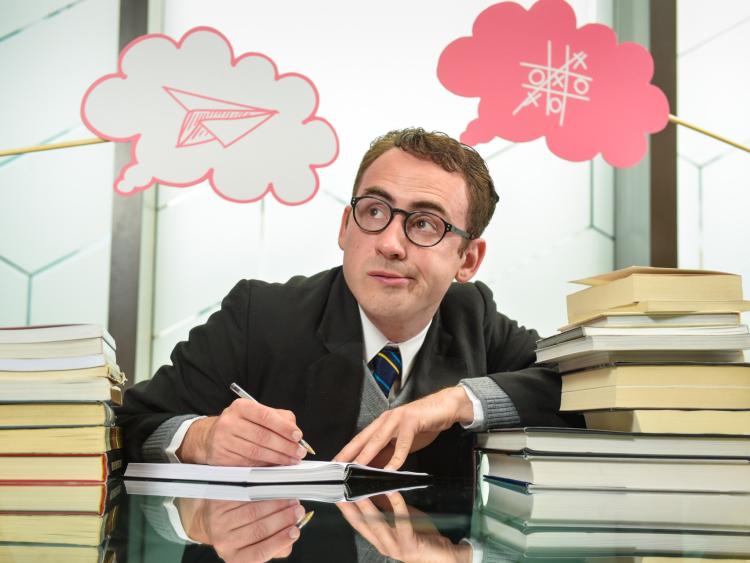 Adam Dougal as Adrian Mole in his last theatrical role

Next month will see Barnstorm Theatre Company’s newest creation for seven year olds and upwards plus their families at the Watergate Theatre.
Barney Carey Gets His Wings was written especially for Barnstorm by leading playwright for young audiences, Brendan Murray.
The play happens in the garage at the home of Barney Carey (aged 7 ½)and his dad (aged 37 ½).
What might have been an ordinary Saturday afternoon becomes extraordinary as obedience to the rules of living and the conventions of good behaviour give way to desire, freedom and self-realisation.
In our first Meet the Cast articles we meet Adam Dougal, who plays the part of young Barney Carey.
Adam recently played the title role in The Secret Diary of Adrian Mole Aged 13 ¾, based on Sue Townsend’s best-selling novel.
Where are you from, Adam? I was born in Belfast and work between there and London.
Have you performed in Kilkenny before? No, but I can’t wait! I will be living in the city for a month.
Was your English teacher inspiring? My English teacher was a very grumpy man but I did have other inspiring teachers in music and drama who introduced me to a world of performing and the magic of theatre.
Did you attend the theatre while in primary school? No, I was part of the choir and performed in most of our concerts so, it wasn’t until secondary school that I really got into drama. I had my first professional job at The Lyric Theatre, Belfast when I was 13- years-old.
Tell us about your character? Barney is an intelligent and inquisitive young boy, obsessed with flying! He is at the age when he is trying to make sense of the world around him and he finds adults very confusing.
What sort of person is going to love the play? Everyone – that’s the beauty of the story; it’s universal and it applies to young and old.
What will the audience be thinking about as they head home after the play? The adults will realise the responsibility they have in shaping our children’s view of the world and will be thinking about the importance of treating everyone equally. The children will be inspired to follow their dreams and not be afraid of being unique.
Who will have the best costume? I’m hoping my wings will be pretty spectacular, but I think the bearded lady’s will be the best.
What’s challenging about bringing this script to life? It’s getting across the overall message of the play; there’s a moral lesson in there and I will have that in my mind’s eye as I work through the rehearsal process.
Why did you want to be involved in this production? I cried when I read the script – I have no shame in admitting that it had a huge effect on me.
I connected with the story and the message it is trying to get across. I have a young niece and nephew and this is the kind of production I want them to see – theatre that will teach them how to approach life as they grow up but also how to be a kind person.
If you could choose any character to play, what would your dream role be on stage/film? Sometimes you don’t realise your dream role until you’re doing it. Acting in Adrian Mole Aged 13 3/4 was a dream role. I can’t wait to get started on Barney and to meet the team.
School performances are on Wednesday, February 21 to Friday, February 23 with a family show on the Saturday.
Tickets are available from the Watergate Theatre, tel 056-7761674 or from Watergatetheatre.com. Next month join Barney, his dad, and the lady with the beard in this comic tale of forgotten memories and future possibilities.