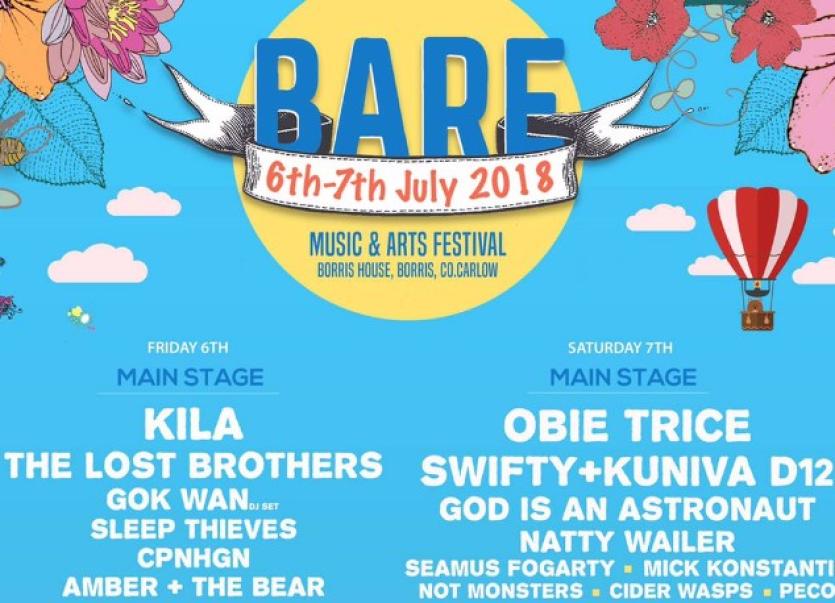 Just some of the lineup set for #BARE 2018, which takes place this weekend

Having won best one-day festival at the Irish Festival awards earlier this year and having sold out for three years in a row, #BARE18 is back with some incredible acts for this year at anew and enchanting venue.

The Bare Festival takes place this weekend, Friday and Saturday just over the border in County Carlow. Its new home is picturesque Borris House in the middle of the lovely market town.

#BARE18 will take its rightful throne at the county pile of the High Kings of Leinster creating one of the most scenic festivals in Ireland across 1,000 acres under the shadow of The Blackstairs Mountains.

Headline acts Obie Trice featuring Kuniva and Swifty D12 will bring Detroit underground to Carlow.
Wicklow’s God is an Astronaut make a rare Irish festival appearance and fashion star Gok Wan trades his clothes rail for a DJ deck with a set to raise the High Kings themselves.

Other acts announced are The Lost Brothers, Seamus Fogarty, Kila Tebi Rex and YouTube Conor McGregor phenomenon Mick Konstantin.  Natty Wailer is sure to bring some Jamaican vibes to #BARE18.

So why the move to Carlow? When you see Borris House you will understand. Its breathtaking dramatic location will wow festival fans.

As with previous BARE festivals, performance art will take place at different and surprising locations during the event so keep your eyes peeled and #BARE18.

Picture it… a hot summer's weekend, a location fit for a King, amazing music vibes, spoken word, comedy, live wrestling, artisan food, craft beers, funfairs, camping and much much more…#BARE18 has it all.