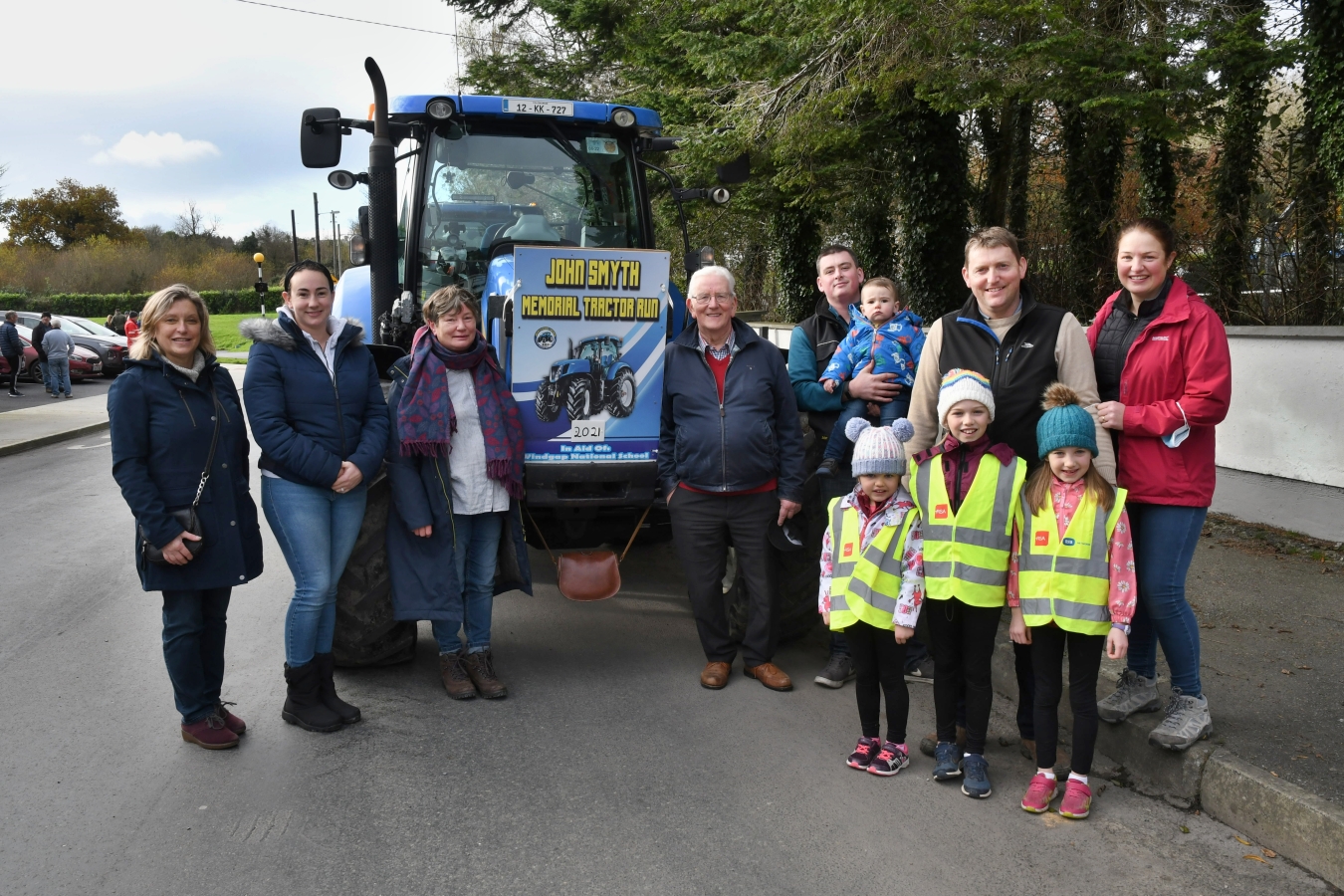 With a change of plan owing to the escalating Covid figures, the on route refreshments, auction and raffle stop at the Auld
House in Killamery was brought forward to the start of the event in Windgap.

From midday almost 130 of the 160 registered tractors assembled in Windgap where refreshments were served and the auction and took place in the wide expanse around the school, Community Centre, Lake and the GAA pitch.

With local auctioneer Michael Cunningham in full sway, the lots of timber and generously sponsored vouchers for whatever you wanted helped thousands of euros roll into the funds. The cavalcade of tractors of all shapes, colours and makes then took the amended route down the Callan Road to the Glen before turning left towards Butlerswood and left again through the main street of Bearna na Gaoithe.

At the top of the Barrack Height they swung right via John’s homeland in Oldcastle, continued via Frankfurt and over the County Bounds in Cappagh to Castlejohn Cross. After a sharp left at the cross it was downhill to the bridge and
back into Chontae Cill Chainnigh.

Continuing on the undulating road via the Moat in Kiltrassy and over the river down to the Thyne and Maggie Russell’s Bridge the tractorcade swung right at Meallaghmore Cross before passing through Knockroe. Heading towards
Quigley’s bridge over the Lingaun River and facing the stiff climb of Molly Meagher’s hill towards Ahenny they swung back left through Inchanagloch.

After passing through the Slatequarries towards the junction on the main road in Baunreigh, one could only surmise what the constable doing point duty from the former RIC barracks a century ago, would have had thought of the modern day setup. Back on the more comfortable two lane highway it was full throttle uphill towards Barnatrasna

With modern diesel engines, there was little need as in days of yore when Looby had to 'put up steam to climb Knockeen' with his threshing machine to get to Bourke’s yard in the nearby towns land. Over the top of the climb, where the formula three motor time trials were once held, the engines were allowed cool down through Ballygown. Approaching the outskirts of Kilmoganny village the train of fundraising vehicle’s that included vintage cars and trucks took a sharp left back to the Glen via Kildrummy.

Now approaching 3.30 it was home to look after man and beast with milking time for some. As everyone reflected on a day to remember, there was the breaking news, that owing to more Covid restrictions that none of the trusty steeds would be making an early start for Dublin as part of the Save Irish Farming Demonstration.