Modernisation opens a window on Thomastown’s medieval past

Hundred of years ago Thomastown was a busy, medieval port town. Merchants used the River Nore to bring all kinds of goods inland, and then on to the medieval capital of Kilkenny.

Thanks to recent archaeological discoveries in the town it’s easier to imagine what life in the town was like, hundred of years ago - what people ate, the kind of jugs that poured their wine, and what their homes looked like.

Over the last few months, run-of-the-mill works to improve the ‘public realm,’ put electrical ducting underground and water pipe works, has unearthed some exceptional evidence of daily life in Thomastown from the 13th to 19th Century.

than they expected. It’s because an infrastructure project of this size comes with archaeological supervision, and discoveries that have been made so far range from the solid, stone foundations of medieval buildings, to beautiful and fragile sherds of medieval pottery.

Remains from a wall of a post medieval building (circa 16th Century) were identified one metre below the road level, and preserved in situ, outside the Framewell Shop on Logan Street.

An early modern stone well was identified under the concrete and tarmac outside Thomastown Courthouse. This well was likely contemporary with the courthouse and when this project is finished it is planned to mark the location of this well in the paving.

It’s a nice twist of fate that work to modernise the town has opened a window on the town’s past.
Last September Kilkenny County Council began a project under the Town and Village Renewal scheme along Logan and Low Streets to underground services including ESB and Eir cables, widen footpaths, install new kerbing, a pedestrian crossing and resurface roads with improved road markings.
That work meant digging, and digging in a town as historic as Thomastown meant an archaeologist had to be on hand at all times.
Regulations are set out under planning laws and the National Monuments Act. 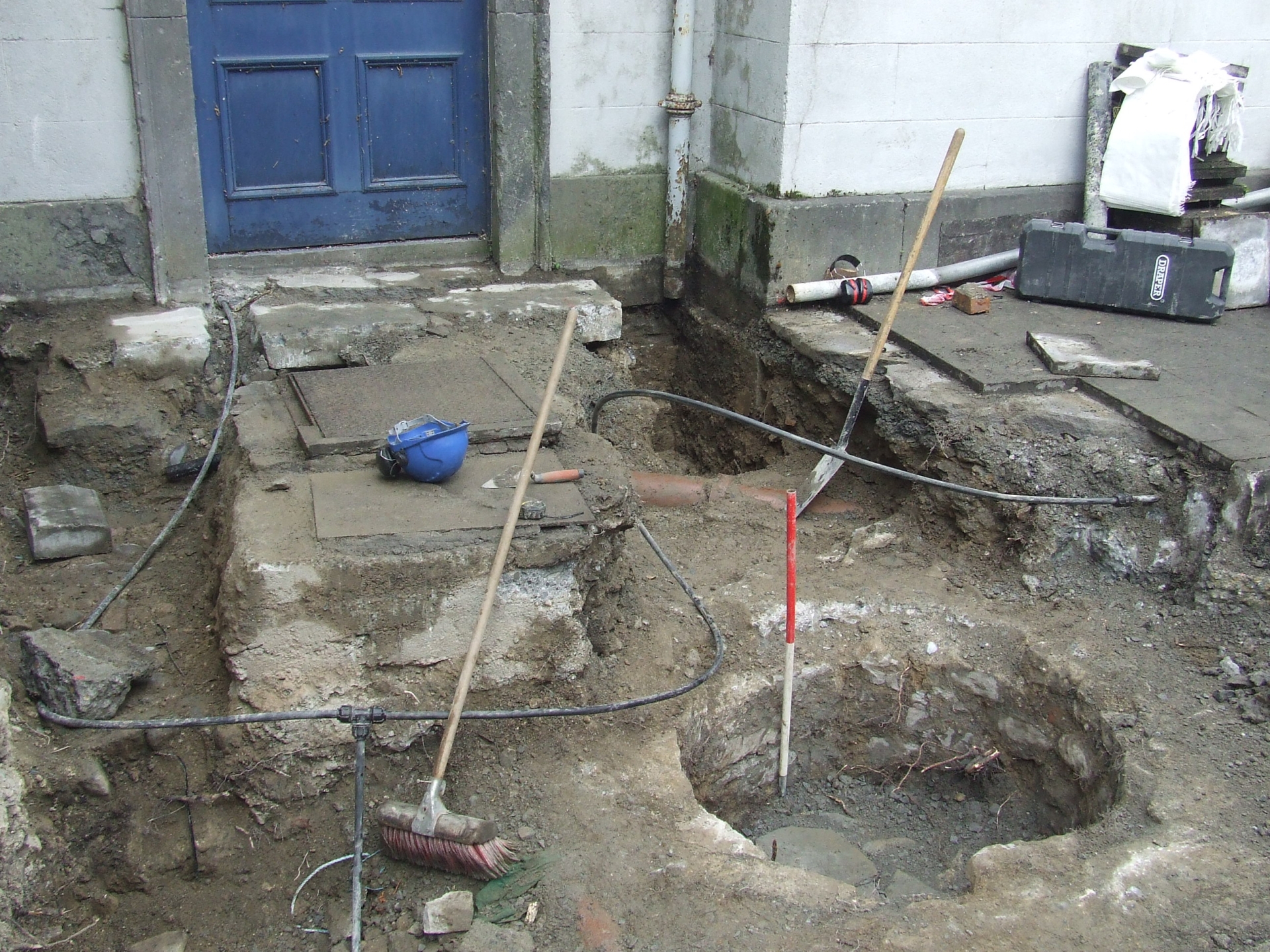 Above: Remains of the town well outside the door of the Sessions House in Thomastown

In Thomastown archaeologist Colm Flynn was brought in to supervise the work - and his team have identified and unearthed some gems from the town’s past.
During works like this the archaeology is ‘development lead.’ What this means is Colm inspects the trenches that are dug for the undergrounding of services, to determine if there is material of interest, but he can’t carry out an excavation independent of that work.
“We can only excavate where there is going to be a physical impact from the development,” he explained.

Even the depth of the trench is dependent on the development and not the archaeology, so it’s ‘pot luck’ what will be found, if anything. Many of the discoveries in Thomastown have been found about half a metre below the surface.
“We might know the trench indicates more but we can’t make it bigger. We follow what the developer needs, in this case Kilkenny County Council. We get to look in the trench.”
Another way to look at it, Colm says, is that all the archaeology not in the trench is still there, under roads and buildings and maybe in 20 years time technology will have advanced to a level where they will be able to recreate what’s in the ground without putting a shovel in the soil.

The construction works for this project have required narrow slit trenches to be excavated up to 1metre deeper than the existing road level.
One of the most beautiful discoveries made during the project has been a glazed, pottery jug handle. Colm said it is very ornate and high status and could have been from a wine jug in the home of a relatively wealthy merchant. Other pottery sherds have also been unearthed that would have come from more common pots used around the same time.

Thomastown grew in the medieval period because of this trade and commerce. Boats could dock there and goods could be transported on to Kilkenny City. Pottery found could indicate the wine trade carried on in the town.

Another discovery that reflects the business past of Thomastown is a solid ‘hundredweight’. More recent, in that it’s only about 150 years old, it’s a nice discovery because it reflects the continuous industrial activity in the town. 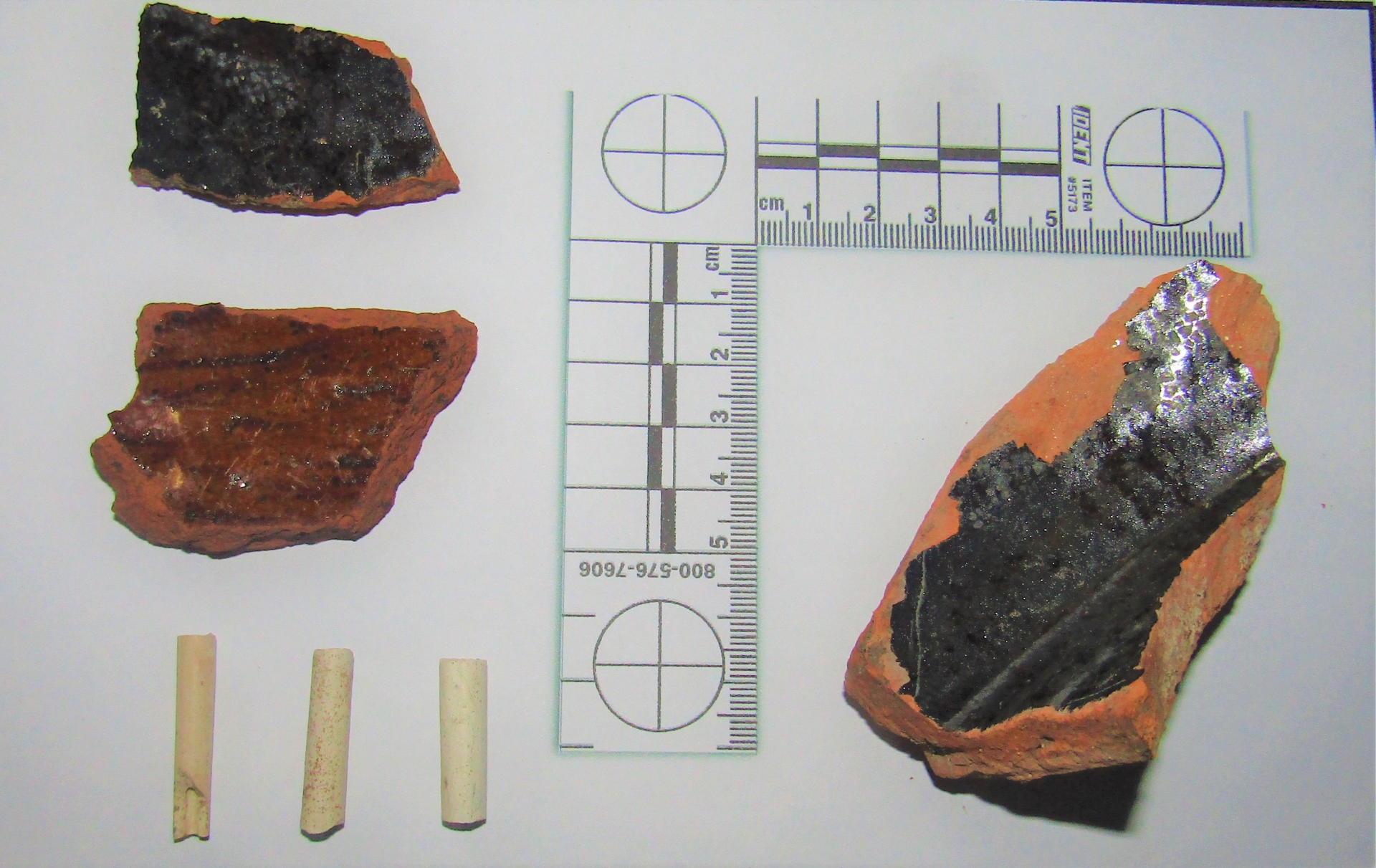 Above: Pottery and pipe sherds found under the ground in Thomastown

In the clay, small discoveries can be a tangible link with the people of the past. Colm has unearthed the remains of a number of clay pipes. These would have been used before cigarettes, right up to the late 19th Century.
“They would have touched the lips of the owner and would have been used until they became clogged up with ash, they’re an intimate item,” Colm said.

Among the items uncovered is quite an amount of animal bones. These have signs of butchery and would have been from domestic cooking. The bones are from pigs, cattle and some sheep and will be examined by a specialist. It could be another sign of wealthy merchants in the town as in medieval Ireland meat was not a daily food for the average person.

Along Logan and Low Street the foundations of quite a few merchants’ houses have been seen.
The streetscape now is wider than it would have been in medieval times, when Low Street would have been no wider than what we would now call a lane. The line of current buildings have moved back but many seem to be built on the walls of former buildings and in much of the same footprint.

to taxes raised in the city to pay for the construction of walls in Thomastown. It was a significant outpost of the city and featured highly in the life of Kilkenny as a county.

Discoveries have been photographed and the National Monuments Service informed, and items uncovered have been sent on to the National Museum  of Ireland for preservation.
Work commenced last September on Logan Street, Maudlin Street and Pipe Street, and continued southwards towards Low Street, between September and November. Work on Low Street has temporarily been paused, under Level 5 regulations, but when construction starts up again we can only imagine what fragments of the past will be uncovered.