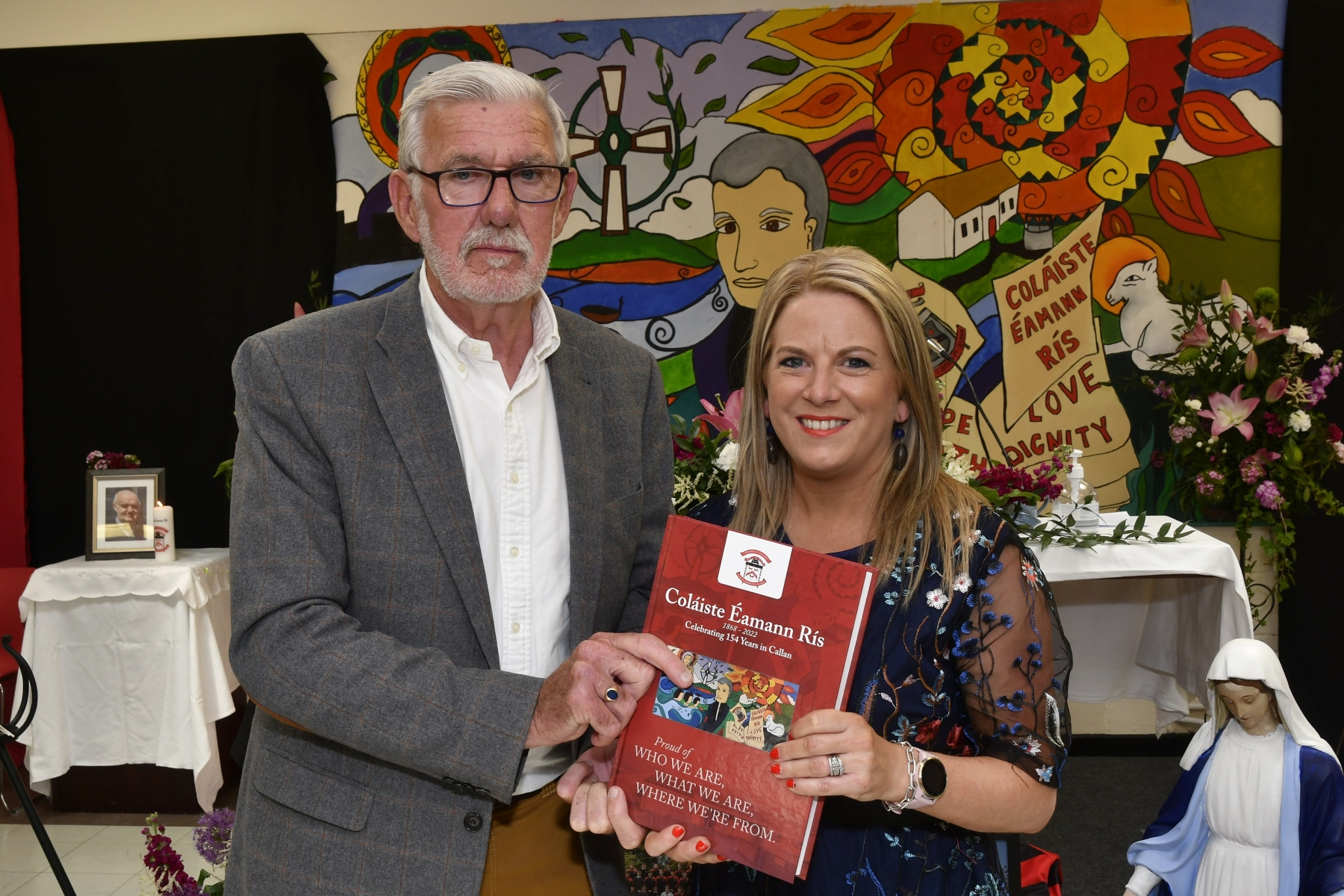 ABOVE: Launching the 400-page, hardback history of Coláiste Eamann Rís were past pupil and RTE Doc on One's Dr. Joe Kearney with teacher and editor of the tome Martina Griffin.
PICTURE: HARRY REID

The beautiful heat from the sun only served to add to the warmth of the atmosphere last Sunday as crowds packed into the assembly hall at Coláiste Éamann Rís for their school celebration mass and closure event.

The many locals with strong connections to the school remarked how incredible the school looked, bedecked as it was with fragrant floral displays, lanterns with the school candle brightly lit and a myriad of colourful photographs and flags representing the diverse ethnicities of the students on display.

Chairperson of the board of Management of Coláiste Éamann Rís, Martin Fahey began the festivities when he outlined the schedule for the day.

The moving ceremony was officiated by past pupil Fr Richard Scriven, who spoke fondly of his time at Coláiste Éamann Rís, and the strong ongoing family link which has continued through the next generation.

A hugely symbolic ceremony of light was performed by Sr Maria representing the Mercy Sisters, Br. Christy Carroll of the Christian Brothers from Westcourt and Mr. Anthony Leahy, Principal of Coláiste Abhainn Rí.

The congregation were reminded of the importance of preserving the ethos of both schools as the begin the new journey together in Coláiste Abhainn Rí. Fr Scriven stressed the value of looking after each other and the need to find a common ground when differences arise, as they may. He encapsulated it best when he referred to the forthcoming amalgamation as “a pilgrimage rather than a sun holiday”. 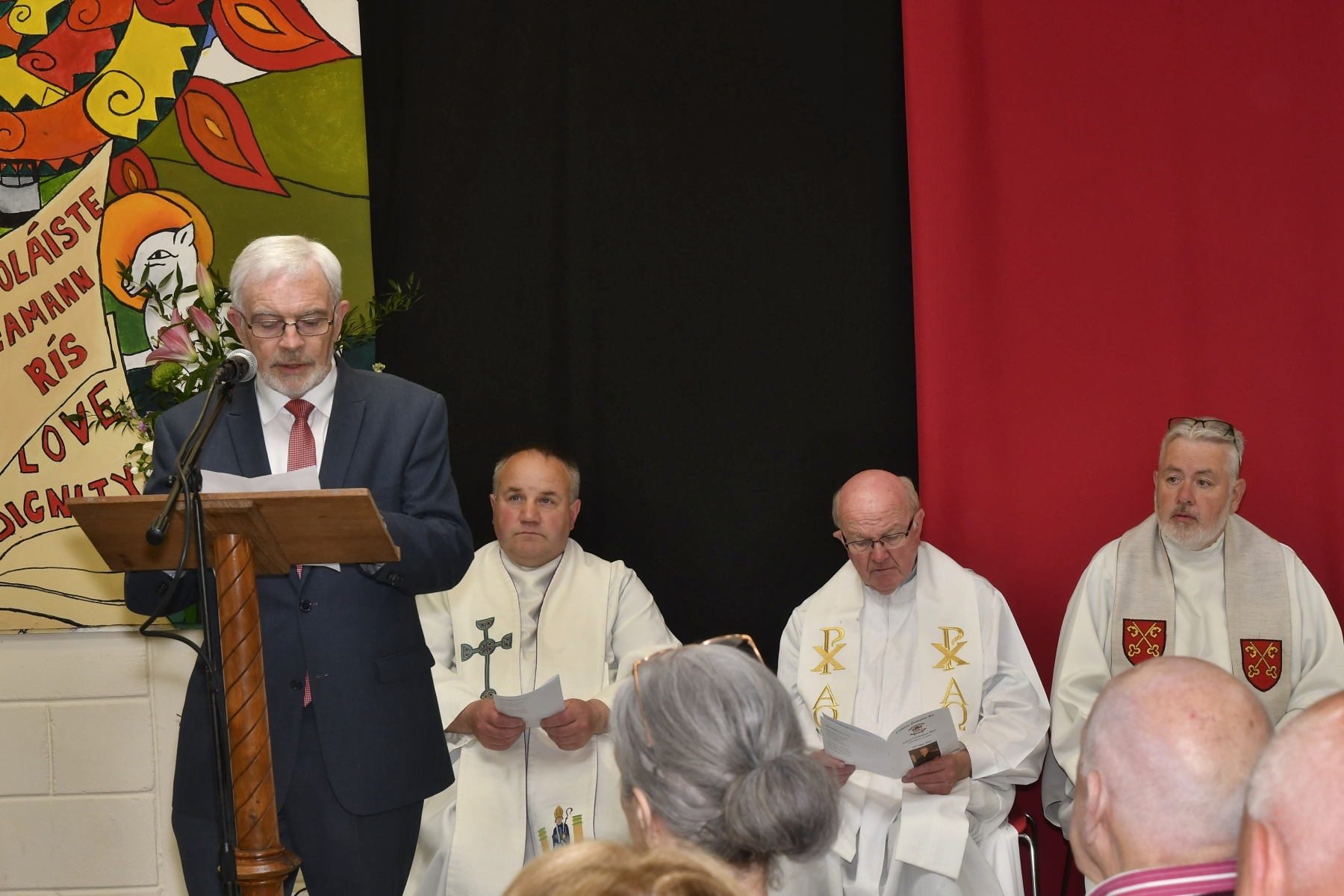 ABOVE: Martin Fahey, Chairman of the Board of Management. PICTURE: HARRY REID

The singing of the Callan Church choir, past pupil Thomas O’Callaghan and the playing of current student and flautist Matthew Hickey greatly enhanced the ceremony. Staff member Catherine Rice Kelly had coordinated the liturgy and included all the school’s partners in the gifts and the offertory procession. These gifts covered the entire gamut of areas in which the school has excelled.

Principal Joseph Brennan performed his role as master of ceremonies with gusto and good humour for the afternoon. He welcomed the many guests and expressed the school’s delight at the great numbers in attendance. He referenced the many special guests, including local councillors Joe Lyons and Matt Doran, Cathaoirleach of Kilkenny County Council, Fidelis Doherty, John Paul Phelan TD, Jimmy Walsh from Kilkenny County Board and former mayor, John Coonan.

Representatives from the Edmund Rice School’s Trust, The Christian Brothers and The Mercy Sisters were guests of honour, as was Tony Nolan and his wife Anna from Mullinahone. Tony is one of school’s oldest past pupils on the cusp of his ninth decade. The Nolan family are synonymous with local history as his father, Mick was representing Tipperary in Croke Park on Bloody Sunday.

Several speeches followed the mass and a common thread that was evident from all was the compassion and care for all members of the school community which is such a central tenet of an Edmund Rice education.

Former Principal, Frank McKenna was introduced as the first speaker. Mr McKenna has written the history of the school for inclusion in a book to mark its closing. He spoke in glowing terms of the contribution of Bro Jim Dunne in getting the current school built in the early 1980s. He was similarly glowing in his description of the first principal in the new building Bro Tony Twomey. He had a special word of praise for Br Pat Hegarty whom he said personified the Edmund Rice charism like no other. He outlined the main areas the school had grown under Mr Donal O’Hanlon, himself, Br Damien Brennan and latterly Canice Hickey, Majella Gleeson and Joseph Brennan. He went on to recall the many instances of how the school demonstrated its capacity to care for each other and those in need locally, nationally, and internationally. He paid tribute to all those associated with the school and had a special word of thanks for the Christian Brothers who worked in the school, and he hoped the connection with the monastery in Westcourt would be maintained.

Brother Edmund Garvey, Leader of the European province of Brothers thanked all the staff most sincerely for all that has been achieved and spoke of how the wishes and teachings of Blessed Edmund Rice are emulated so well in schools today through various endeavours like advocacy and the quality of the young people and what they are capable of today. He noted that the Edmund Rice tradition is in fact in its golden age today. He referred to Coláiste Éamann Rís as “a fantastic school community”.

Fellow Brother, Christy Carroll was presented with a photograph of a magnificent granite bench commissioned by the school community for the Brothers in Westcourt to recognise the contribution of the Christian Brothers over 154 years of education in Callan. He asked for the group to continue to use the visitor centre and ancestral home of Blessed Edmund Rice.

Canice Hickey, deputy principal and former student spoke from the heart when he recounted his own experience as a shy young boy who entered the school at 12. He, like so many others in attendance captured the soul of a school which he said “saw the potential in people, even when they didn’t see it themselves. He recalled a place which nurtured, encouraged, and provided supports for (his) potential to become reality”. He continued that while Coláiste Éamann Rís views the academic development of its students as being integral to what they do, it is not the only focus of their efforts, and outlined a long list of sporting and other extra-curricular successes which highlights the holistic educational experience on offer here.

This certainly was telling when one witnessed the large numbers of respectful, buoyant young men in full uniform who turned out in force on such a fine day to welcome their guests with a guard of honour on the red carpet at the front door, entertain some of the younger guests and assist where necessary throughout the proceedings. The respect and care spoken about constantly throughout the day was tangible to all who attended the event. 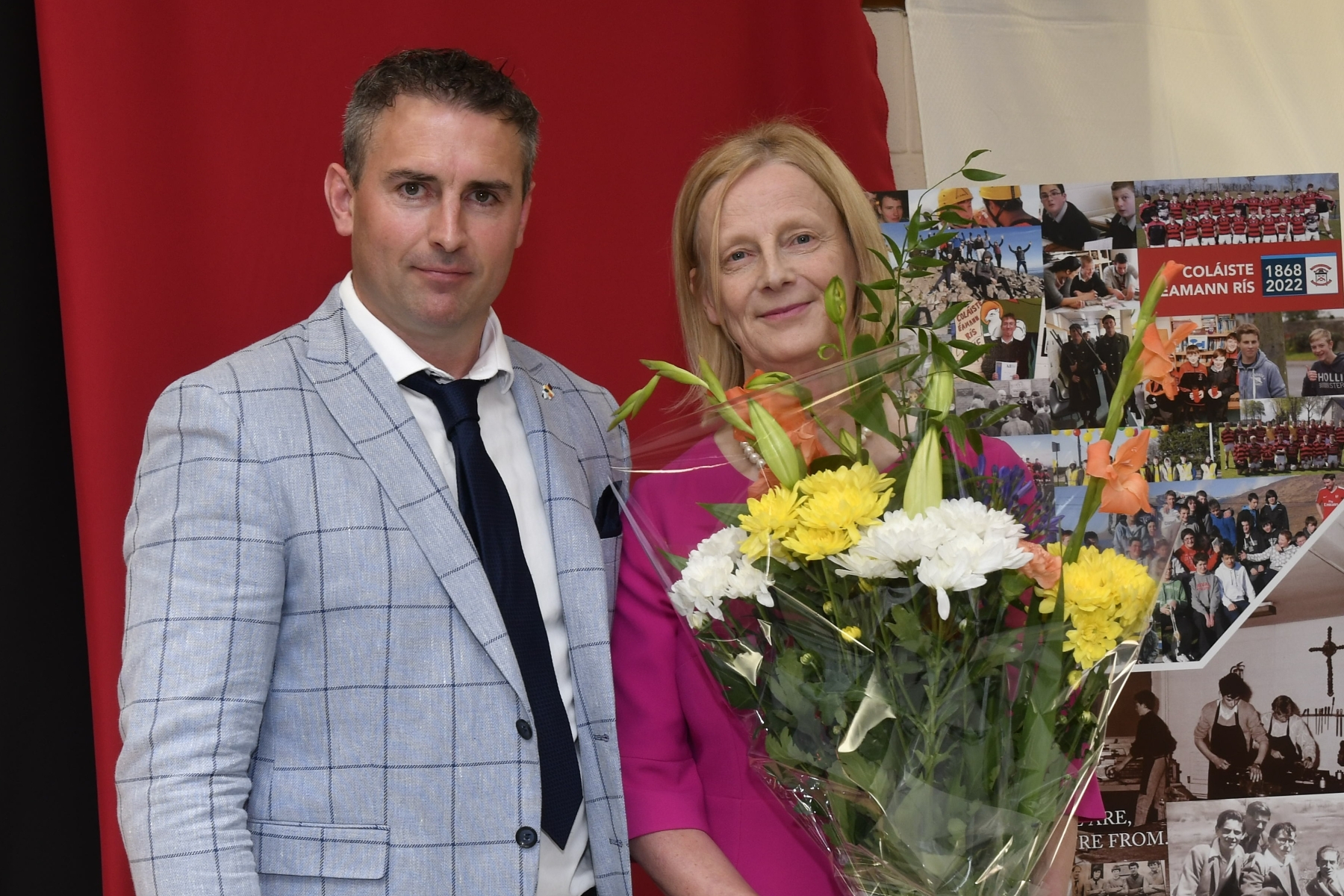 A highlight of the day was the much-anticipated book launch encapsulating the 154 years of the CBS in Callan. Former student, Dr Joe Kearney of RTE’s Doc on One fame presented the first copy of the book to current staff member and editor of the book, Martina Griffin. Tome is perhaps a better description of the enormous publication which I am told weighs 4lbs. It is incredible value at just €20. Martina stressed the input from Mr Frank McKenna, without whom she said the book simply could not have happened. Great teamwork indeed, and the great historical volume was very well received by the crowd when it went on sale. Current and former students will love to find themselves between the 400 pages.

Before she concluded, Martina gave the attendees food for thought, when she spoke of the great service the men and women of the religious orders have provided the state. She referenced the financially bankrupt government of the 1920s, who were content to allow the church to continue their role in education and healthcare with minimal interference and thanked The Christian Brothers and Mercy Sisters for their vast contribution to Irish life over the decades for little more in wages than their food and board. This was greeted by a warm round of applause for those very men and women who have played such a servile role and have provided education and healthcare to so many who simply would not have received it otherwise.

The entertainment concluded outside in the May sunshine with refreshments and live music as old friends reconnected and new memories were made. Edmund Rice schools speak of partnership in the community- the marquee which was erected by their many past pupils in the army, the stewards- volunteers from John Locke’s GAA club and the copious amount of food and drinks served by the parent’s council was certainly evidence of this in action. It was great to see Coláiste Éamann Rís get the send off it deserves, and everyone said the place never looked better!

Click 'NEXT' to see more photographs from the special day!

Historic Callan walled garden gets a new lease of life