Day in the Life of Courtney Cass 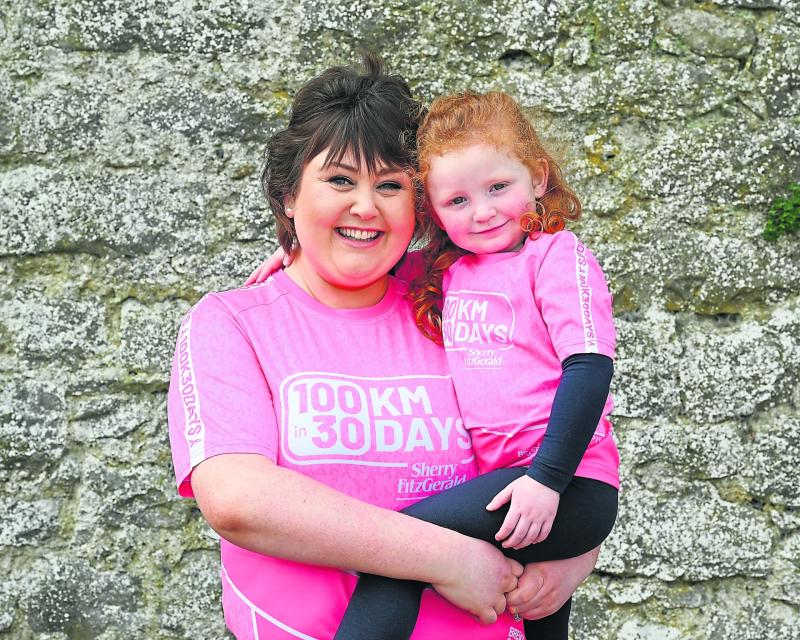 From Kilkenny, Courtney Cass was born and raised in the heart of the city. She loves Kilkenny and always wanted to stay here: “I didn’t want to leave it, but had to go to college Galway to study Heritage Studies and then came straight back to Kilkenny to work.”

Roll on to 2015 and she is married to Shane, who she met in Langton’s before doing her Leaving Cert. They welcomed their beautiful daughter Pippa into the world three years later. Courtney also landed her dream job in the Pembroke Hotel, when she worked her way up from being receptionists to duty manager, Guest Relations Manager, and now she is Rooms Division Manager.

However, during lockdown, the 32-year-old's world was about to be turned upside down.
Here is a glimpse of what happened to Courtney Cass…

Courtney, how did you discover you had breast cancer?
I was getting ready for bed and while putting on my pyjamas, I found something when I was taking off my bra. I just ran my hand over something, and I was like, ‘oh, that wasn’t there last week’.
It was so small that I wasn’t even sure if I should get it checked. Thankfully I rang the doctor the next day and when she examined me, she said there’s something there and referred me down to Waterford.

I had my first appointment in Waterford two weeks after that. It was all very quick. The doctor said that it was probably just a cyst and didn’t think there was much to worry about, but that they referred me for a mammogram and a biopsy if needed.
Two weeks later, the mammogram was fine. Then I was sent in for the biopsy, they also took a biopsy from my armpit, and I was wondering why are they going over there. Everyone was super nice to me; I just got this feeling there was something wrong.
I had not told anyone that I was doing all this, not even my husband Shane because I didn’t want anyone to worry if there was no reason to.

Even when you went in for your results?
It was during Covid, so you had to go to your appointment by yourself. I wasn’t expecting it to be cancer to be honest.

When I went in the day for the results, and the doctor said, ‘have you nobody with you?’ I knew straight away then that there was something. When I heard those words I literally froze and started crying.
He explained how it’s so common for girls my age. How it’s changing so much over the last few years and it’s getting women younger and younger, and they don’t know why.

As soon as I heard the word cancer, I was like ‘I’m dead’. I literally just thought I was going to die and that was it. I thought that I wouldn’t see Pippa grow up, how would Shane manage without me with Pippa and all that kind of stuff.

I was going to blank everything else that I was being told, but the nurse there was amazing. She wrote everything down that I needed to know.

Hope followed immediately after receiving the diagnosis?
The surgeon said that we caught it early. It was only like two centimetres in there, so it was tiny. At that time, it was stage two, grade three. Stage two meant that it had spread and it was in my lymph nodes and my armpit.

I actually felt like an uncomfortable sensation, the previous week and I kept kind of trying to fix myself and fix my bra. But no, it was my lymph nodes swelling.
My surgeon Dr Murphy was so lovely, and he said that it was treatable and curable. And as soon as he said that I was like, ‘right, I’m going to be okay, I am going to live’. My whole outlook and attitude just changed.

Once I knew it was treatable and curable, I was going to do anything I had to do to live and survive it. My surgery was scheduled two weeks after that.

That was very quick.
Yes, two weeks after I had my surgery, I had a lumpectomy. They just removed the cancer and a bit of tissue around it. They removed 21 of my lymph nodes under my armpit so it was called an axillary clear out. I even went home the day after my surgery.

It wasn’t in me anymore, so it couldn’t go anywhere else. That helped me to deal with the process.
It took six weeks of recovery from the surgery, and then I started chemo on February 4, on World Cancer Day.

Due to my age, they just wanted to give me the best chance possible of it not coming back. So, I had the lumpectomy, chemotherapy, radiation and now I’m on an injection monthly and the tablets for the next seven years.
On May 14, last year I finished my chemo, but it literally feels like years ago now. 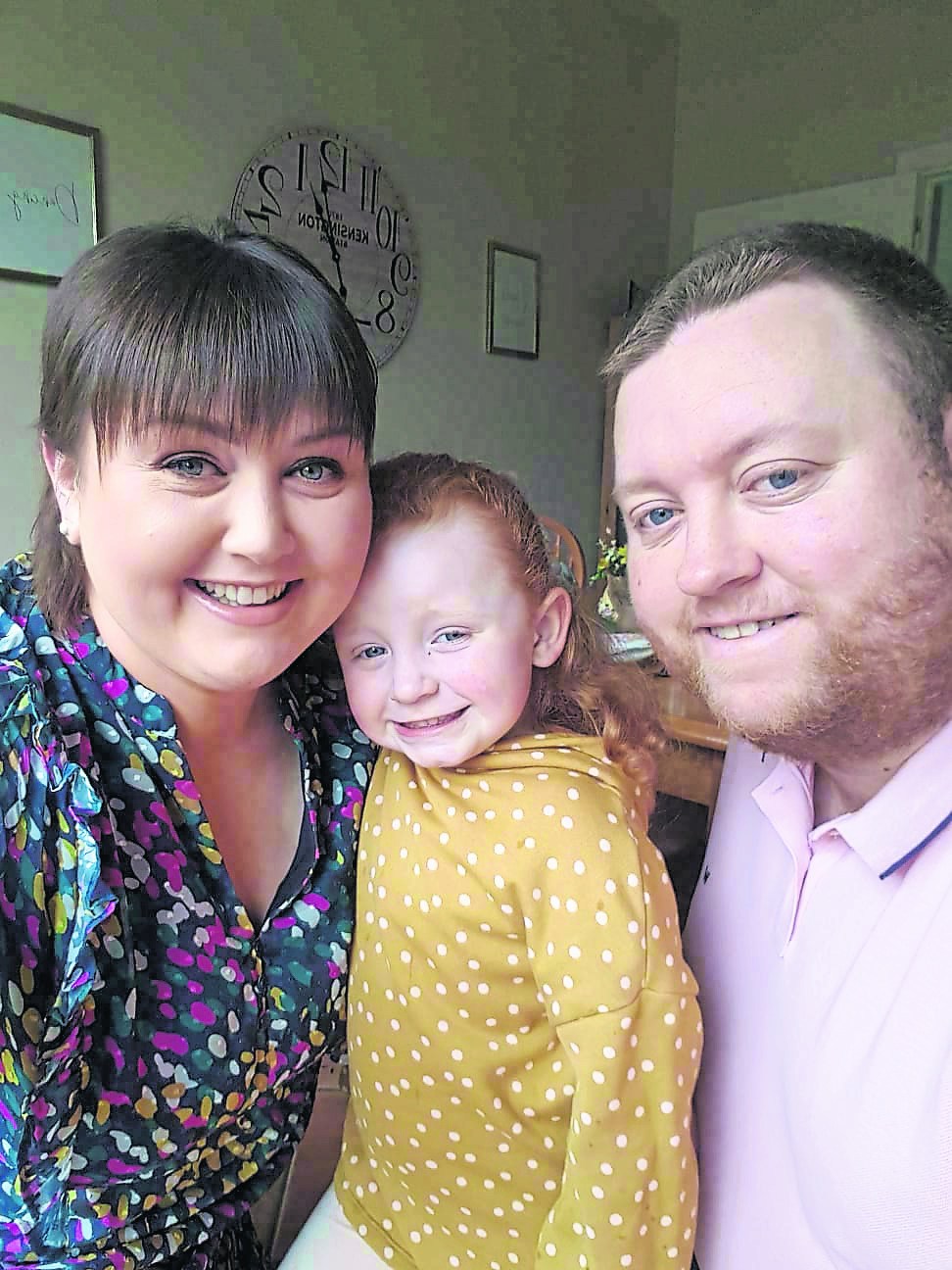 ABOVE: Courtney with her husband Shane and daughter Pippa

Early detection is what you’re urging people to be aware of.
Absolutely. We have all heard of Sarah Harding in Girls Aloud, she let hers go too long because she was worried of Covid, but hers was at stage four, and she ended up passing away.
It really hit home because she was only in her 30s as well. Mine was at grade three, so it was quite aggressive. When I found it at first, the cancer was at two centimetres and by the time I had my surgery had grown to like three centimetres. So, it was growing quite quickly.

Anything at all that doesn’t feel right in your armpits, your collarbones, your neck, your chest, anywhere in that kind of general area. Just get it checked out.

You are this year’s Ambassador for Breast Cancer Ireland for their 100k a 30 day in June. Did I see you did this last year too during your treatment?

I’m thrilled to be a spokesperson for the campaign in Kilkenny and to be their mascot. It’s about sharing my story and promoting the walk to get everyone in Kilkenny to sign up and do it.

Do you find it hard to share your story?
No, as it was probably one of the things that helped me through it. Even sharing it on social media, I received so many messages from girls that I hadn’t spoken to since primary school. They were saying they didn’t realise it could affect women our age and they are checking themselves more regularly now or for some for the first time.

The whole point of sharing my story is to tell people my age that they are not exempt from it. Cancer will not discriminate against you by your age.
Check yourselves, make it like a monthly thing in the shower. Anything at all, that doesn’t feel right, don’t leave it, go get it checked out.

No doctor is going to say you were silly to go if it doesn’t turn out to be nothing. Go get checks and mind yourselves.

Every 29 seconds someone is diagnosed with Breast Cancer. Over 3,500 new cases of breast cancer are diagnosed annually in Ireland. One area Breast Cancer Ireland is funding is education programmes which will help with early detection, which is key.
You can support Courtney in her 100k in 30 days - follow her story on https://100kin30days.ie