Farmers are primary custodians of the land says Kilkenny councillor 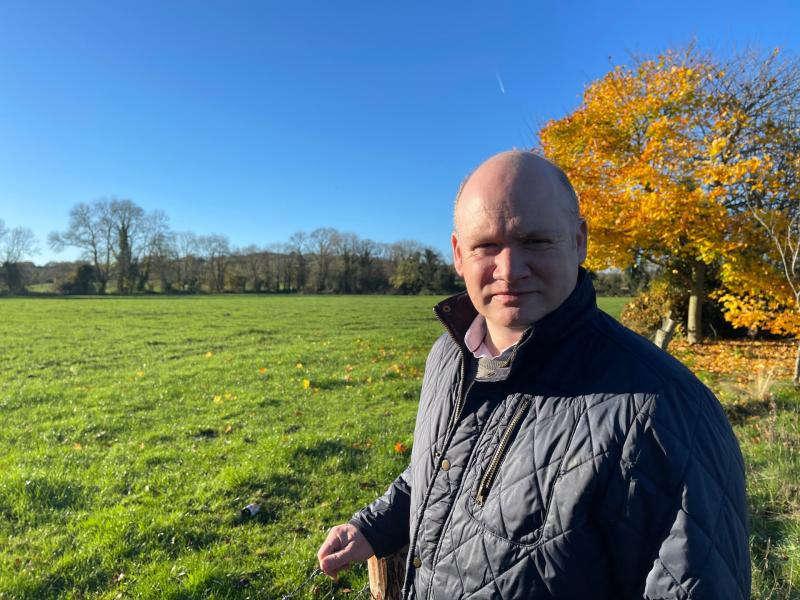 “Farming is being scapegoated as the reality of CAP reforms and decarbonisation hit home,” says Kilkenny’s Cllr David FitzGerald.

While some seek to demonise farming, Cllr FitzGerald believes we must support farmers as they fight to save their farms and way of life.
His recent motion, passed unanimously by Kilkenny County Council, called on Minister McConlogue to fund an expanded TAMs grant to develop new slurry and effluent storage facilities. It highlighted practical steps Cllr FitzGerald believes will help farming survive.

“With recent government reports claiming that agriculture accounts for over 35% of all Irish emissions, farming is being targeted as the Ireland’s carbon villain in the climate change blame game,” says Cllr FitzGerald.

With climate change activists calling for reductions in the national herd, farmers argue that agriculture is not being given credit for carbon sequestering in hedgerows, forestry and grassland when emissions figures are calculated.

While expansion on many farms has progressed at breakneck speed, the management of farmland has fallen behind in the rush to increase production. Farmers need government supports to deal with nitrates run off into water courses as part of the clean-up of their high production farms through new TAM’s grants for slurry holding tanks and measures to reduce run off.

Cllr FitzGerald acknowledges that with the abolition of milk quotas in 2015 there has been significant expansion of the dairy herd. “This growth was promoted by the EU, Government, Teagasc, Co-ops and banks with farmers actively encouraged to expand production and increase cow numbers. At that time, agronomists believed that the growth in dairy production would be offset against a reduction in suckler cow numbers. In reality, the drop in suckler numbers has not matched the increase in the dairy herd. While the farm leaders oppose a Department of Agriculture “suckler scrappage scheme” to encourage older farmers exit beef production, all stakeholders need to support farming through this difficult carbon transition,” he says.

While other sectors of the economy have grown substantially since the 1990 emissions targets were set, cow numbers have seen a modest change compared to transport and industry.
He believes that the growth in dairy has been well managed by a new generation of well-trained farmers who operate with efficiency. These farmers have invested heavily in new facilities, robotic parlours and productive livestock to create a world beating grass based, low carbon, dairy industry.

The new reality is that dairy farmers have increased their herd numbers and their productivity without a major expansion in the land available. The use of increased volumes of fertilizer and slurry is causing nitrification of water courses, leading to decreasing water quality due to the run off from rainfall washing these nitrates into the adjoining dyke, drains and streams feeding our river network.
Pressure to secure land has seen dramatic increasing prices with land being sold at prices up to €25,000 per acre while leased land is making over €1,000 per hectare per annum for 5 year rental deals.

Cllr FitzGerald believes that as UN targets greenhouse gas producers, the focus for carbon reduction should begin with the high carbon grain based dairy and beef producers across the European Union. The European Commission has failed to decommission high carbon footprint milk producers on the continent by opting for a country by country series of reduction targets. High carbon grain based milk producers across northern Europe continue to produce high carbon milk as the EU allows local politics to set the decarbonisation targets.

“Despite climate change, dairy and beef will continue to be a staple part of diets across the world. It makes sense in our single market that Europe continues to support the Irish low carbon producers of all foodstuffs while removing high carbon food producers within the EU. Ireland remains the most suitable location within the EU to produce low carbon milk, beef, lamb and other foodstuff due to our temperate climate”.

Farmers anger isn’t limited to the dairy sector as beef farmers struggle to survive. “While Kerrygold butter is sold as a premium product across the world, Irish beef continues to trade at commodity prices despite the fact that Irish beef is the most traceable, quality assured meat on the world market. The failure of Bord Bia to establish Irish beef as a world class, premium product, leaves beef farmers struggling to be profitable while the EU agrees to import rainforest beef into Europe as part of a “Beef for Cars” Mercosur trade agreement.

Cllr FitzGerald is concerned that “some within the Irish Government don’t understand the importance of beef and dairy farming as a way of life across Ireland. The current debate appears to support the view that all farming is bad for the environment”. He believes that “in reality, agriculture and farmers remain the primary custodians of land. Government and European policy makers must ensure that as we decarbonise all sectors of our economy that we support low carbon food producers which includes Irish beef and dairy while ensuring that the Irish farm family remains the cornerstone of rural communities. The contribution of farming as a way of life can not be ignored in this great climate change transition to meet our shared emissions targets in all sectors of the economy”.

CINEMA IN THE CITY WITH CARTOON SALOON