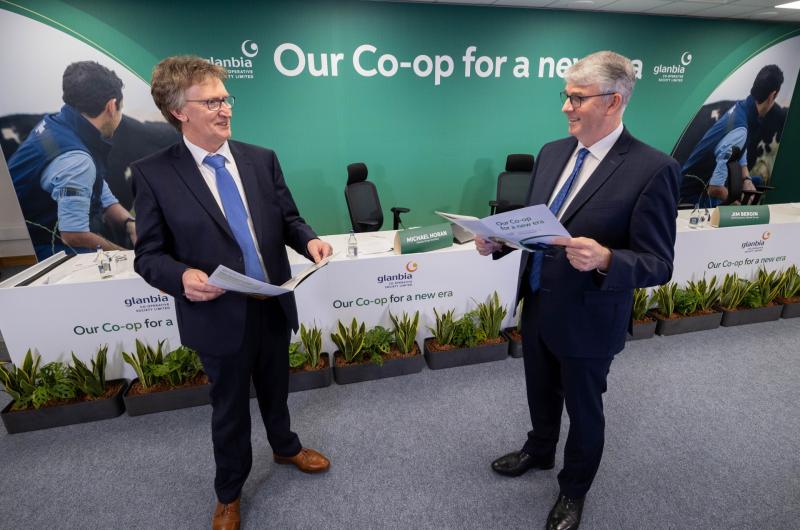 Glanbia Co-operative Society has  announced that its shareholders have voted in favour of the proposal to take full ownership of Glanbia Ireland.

The result at last week's Special General Meeting (SGM) was in excess of 80% in favour of this proposal.

As announced earlier this year, Glanbia Co-op has agreed to pay €307 million to acquire the remaining 40% shareholding in Glanbia Ireland from Glanbia plc.

The meeting took place in an online virtual format as permitted under current regulations and approved by ICOS.

John Murphy, Chairman of Glanbia Co-op, said: “I’m delighted that shareholders have voted firmly in favour of this exciting development for our farmers. It is an historic milestone in the evolution of our Co-op, which has delivered for our farmer members for over a century. We firmly believe that 100% ownership of the world-class processing assets closest to our farmers’ interests is the right model for the future.”

Glanbia Co-op shareholders voted to transfer, via share spin-out, 12 million Glanbia plc shares to all existing Members of the Society. Based on Glanbia plc’s closing share price of €12.43 on Thursday, 16 December 2021 this would be worth approximately €149 million.

John Murphy added: “It is important that we return some of the value of our Glanbia plc investment to our Members, with the proposed spin-out expected to occur in the summer of 2022. Our experience of previous spin-outs suggests our Co-op Members retain their Glanbia plc shares as a longer term investment.”

In addition, shareholders approved the creation of an Investment Fund, a 2022 Member Distribution Reserve and changes to the governance of the Co-op. The Board of Glanbia Co-op will formalise an investment strategy in due course, with any investment in potential projects in the future subject to rigorous scrutiny.

As part of the set of proposals, approval was given by Members for changes to the governance of Glanbia Co-op, including the ability to add executive and non-executive directors to the Co-op Board. In addition, it has been approved that the Chair will now be elected every two years rather than annually, as the Chair is elected at present.

These proposals were approved by eligible members of Glanbia Co-op attending the virtual SGM.

Commenting on the result, the Chairman of Glanbia Co-op John Murphy said:  “The Board’s motivation for making these proposals was very simple – we want to pay the best possible price for milk and grain to farmers. These proposals allow us greater flexibility to support our farmers into the future. Most importantly, our Co-op will have 100% ownership of our processing facilities and will be run to pure Co-op principles. It will maintain strong financial discipline and governance, and be led by an experienced leadership team and Board.

“I’m also very pleased that our members endorsed the proposals to distribute approximately €149 million to all Co-op members with a share ‘spin-out’. It is important that we return some of the value created through our Glanbia plc shareholding to all members. Our Membership Distribution Reserve will also see at least 10% of all payments from that reserve being made in the form of Co-op dividends to all Society Members.

“Our great Co-op has delivered for farmer Members through many challenges over the decades and we believe the decisions made today will position it to deliver now and for the generations to come.”

Jim Bergin, CEO of Glanbia Co-op and Glanbia Ireland, said: “We have a very strong business in Glanbia Ireland, with over €2 billion of revenue, strong market positions and an excellent workforce. Our network of facilities is world-class with over €559 million invested since 2012.

“A number of the world’s leading processors are co-ops and it is a model that has been shown to deliver for farmers. We believe that 100% Co-op ownership of the processing facilities is the optimal business structure for the next the next phase of our evolution. We are entering a period where there will be increased focus on both sustainability and value-add.

“It is a great privilege for me to take on the position as Chief Executive of our Co-op. I can assure our members that we will continue to maintain our strong financial discipline as we take the next step on our ambitious journey together.”

Glanbia plc’s independent shareholders will vote on the proposal at an extraordinary general meeting (EGM) expected to occur in the first quarter of 2022, and, if approved, the transaction is expected to be completed in the first half of 2022.

Glanbia Co-op is in a position to fund this transaction, if required, through a combination of existing cash resources and debt facilities.

Glanbia plc will retain its current name, while Glanbia Co-op and Glanbia Ireland will adopt a new name. A process commenced to select the new identity and approval will be sought from Co-op shareholders in due course.

The main existing commercial arrangements between Glanbia Ireland and Glanbia plc will remain in place until the name change is implemented.

WATCH: Liam Ó Maonlaí ahead of his Kilkenny performance