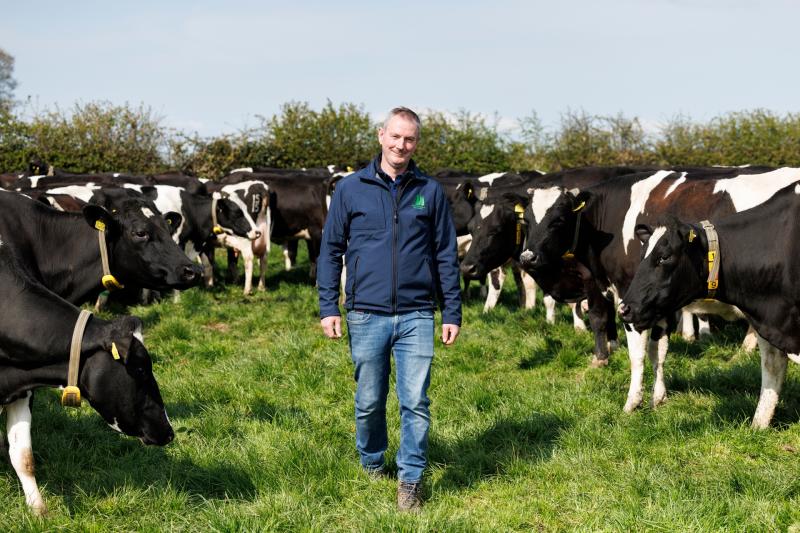 The Irish Grassland Association are hosting a first Dairy Extravaganza since before lockdown, next week.
Kilkenny farmer Tom Walsh from Johnstown will host one of the main events.

Dairy Bus Tour
The Dairy Summer Bus Tour sponsored by AIB will be held on July 19, and will focus on a theme of optimising output on the milking platform. Host farmers for the day will be Tom Walsh from Johnstown . Kilkenny and Denis Cody from Templemore, Tipperary.
Two excellent host farmers who are hitting the high notes in terms of farm performance.

Denis Cody
Denis farms with his wife Carmel and his parents Eamon and Anne, near Clonmore, Templemore, on two milking platforms, one 50% owned and the second 100% leased, totalling 138 hectares.
Returning home from Kildalton College in 2010 with a level 6 diploma in dairying,, he reseeded the 48-hectare home farm over the next three years and began building stock numbers.
In 2013, Denis leased a 21 hectare former dairy unit with a disused milking parlour approximately 7km from home to start a second unit. Starting with 40 cows, two adjoining parcels of land have been leased to create a 48-hectare second dairy farm, milking 150 cows.
All cows are calved on the home farm, and cows moved to the second unit from late February.

An additional 75 hectares is farmed in three sections to supply winter forage and rear replacement heifers.
In 2021 an additional 44 ha block was leased in to the home farm to give a 90ha platform. In 2022 a total of 250 cows will be milked on this home platform.
In 2021 an average of 520 kg milk solids was produced per cow (4.63% fat and 3.78% protein) to Centenary Coop, with approximately 700 kg meal per head.
The overall stocking rate is 2.5 livestock units per hectare farmed, the milking platforms are stocked at 3.2 cows/ha and 2.8 cows/ha.
Last year the farms grew approximately 14 tonnes of grass dry matter per hectare.

Ella Dunphy is the new President of Rotary Kilkenny

Tom Walsh
Tom and his wife Norma farm 64 hectares near Johnstown, Co. Kilkenny.
Having spent a number of years working away from the farm, Tom started farming fulltime in 2003 milking 40 cows that year. Since then, he has grown the herd to the 126 cows being milked this year on the 48 hectare milking platform at a stocking rate of 2.63 cows/hectare.
The remaining land area is used for rearing replacements and providing winter feed.
Tom has bred a high milk solids herd producing >500kg/ cow every year since milk quotas were removed in 2015. In 2021, 620 kg per cow (4.5% fat and 3.72% protein) were delivered to Glanbia. This was produced from a diet of approximately 1.5t of concentrate per cow, high quality grazed grass and grass silage.

In 2021, Tom calved 86% of the herd in 6 weeks with a calving interval of 364 days.
A herd EBI of €182, puts the herd in the top 10% of herds in the country. Tom actively culls low performing cows from his herd each year and this coupled with breeding replacements from the best performing cows and excellent grazing management underpins his continued improvement in milk solids production over the years.
Tom was previously a monitor farmer in the 2004-2008 Teagasc Glanbia Joint Programme.

Mixed fortunes for sheep and beef at Kilkenny Mart this week

Conference
The Irish Grassland Dairy Conference, sponsored by Yara will take place on Wednesday, July 20, in the Talbot Hotel Clonmel.
The conference has been divided into three: Controlling the controllables; Creating certainty; and Attracting and retaining talented people.
Tickets can be purchased (online irishgrassland.ie or by phone 087 9626483) for each day for €50pp for IGA members. Attendance at the night-time event is free.

Preparation: This game comes with more pageantry than any other, so being mentally ready is key
ADVERTISEMENT - CONTINUE READING BELOW