The Grace and Teehan families from Kilkenny - a fascinating insight 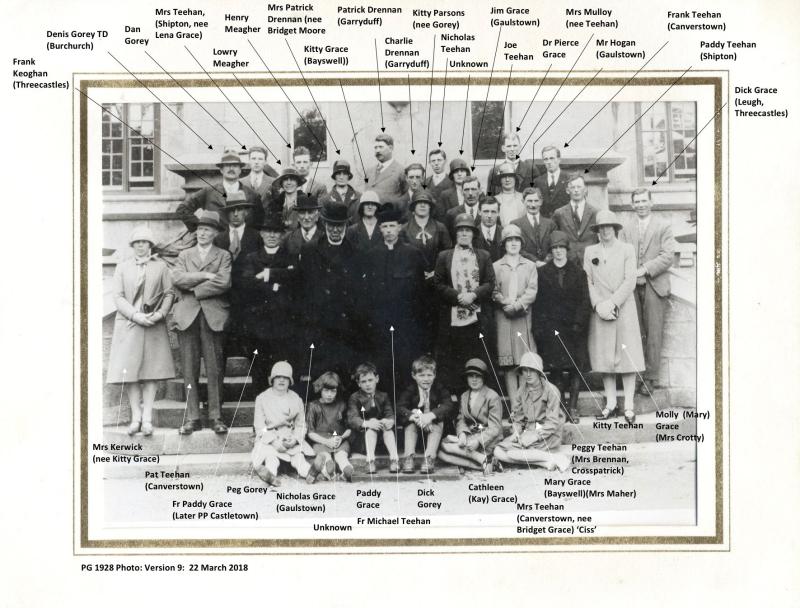 A photograph which was sent to Kilkenny Archives by Dr Pierce Grace of Limerick, appeared in the Kilkenny People some weeks ago.
People were asked to come forward with information about the many ‘unknowns’. Dr Pierce Grace, is a son of Dr Paddy Grace (seated front row) and a grandson of Dr Pierce Grace who stands back row extreme right.
Mr Noel Drennan of Garryduff, Paulstown, his daughter-in-law Annette Meany and others who wish to remain anonymous, came forward, with the result that most of the people have now been identified. One adult and one child remain ‘unknown’.
While this very fine photograph by Arthur Greenhough of Fox, Grennhough of Rose Inn Street, depicts a Teehan (Lisnalea/Canverstown of Tullaroan) ordination, so primarily it was a Teehan family event, the Grace family of Gaulstown, Tullaroan are the underlying cement here.
Graces are numerous in that part of Kilkenny and its well to remember that Tullaroan was/is ‘Grace’s Country’ just as south Kilkenny was/is often referred to as the ‘Walsh Mountains’ because of the numerical strength of that surname there.
The chief family of the Graces were known as the ‘Barons of Courtstown’ which castle and lands they finally lost after the Battle of the Boyne, through confiscation. In taking up the sword on behalf of the Catholic King James 11, they backed the wrong horse. The castle has long gone. Not a stone remains upon a stone. Most of us too have heard of ‘Grace’s Card’ .