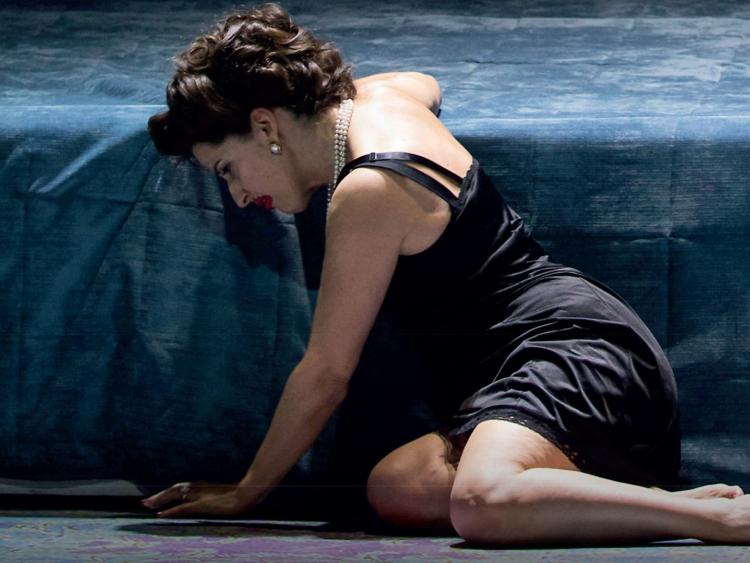 Mary Plazas in the title role of the notorious socialite, the Duchess of Argyll in Powder Her Face

Thomas Adès’s darkly comic opera, Powder Her Face comes to the Watergate on Tuesday next.
This pioneering work from Irish National Opera (INO) is based on the exploits of a notorious socialite, Duchess of Argyll.
She lived the high life from the 1930s onwards — the era is one of the many nostalgically evoked in Adès’s score — and in the 1960s became embroiled in one of the first sex scandals of modern tabloid journalism.
Don Juan
As the Judge in the opera puts it, “She is a Don Juan among women.”
The work has been hailed as “a modern classic” by The Times and The Observer.
INO’s tour takes director and designer Antony McDonald’s highly acclaimed production to Kilkenny.
The co-production with NI Opera was first staged last year at the Lyric Theatre, Belfast.
The title role is taken by Mary Plazas (“the most compelling Duchess I’ve seen,” The Times), with Irish soprano Daire Halpin and Australian-British tenor Adrian Dwyer (“pitch perfect in their incarnations of representatives of the lower orders,” The Telegraph), and British bass-baritone Stephen Richardson (who “delivers a tour de force as the hysterical divorce court judge,” The Telegraph).
Bringing roles to life
The four singers bring a staggering 16 roles to life while the 15 members of The Irish National Opera Orchestra, under conductor Timothy Redmond, swarms through the style-shifting world of Thomas Adès in a work that features the world’s most notoriously explicit aria.
Irish National Opera’s artistic director Fergus Sheil sees him as “arguably the most prominent opera composer of our day.
Explosion of Energy
Powder Her Face was written when he was just 24 and is a youthful explosion of energy and creativity.
He’s the composer of the moment.”
Find out for yourself on Tuesday, February 27. Tickets are €27 each and to book yours go to the Watergate website, watergatetheatre.com or call 056-7761674.