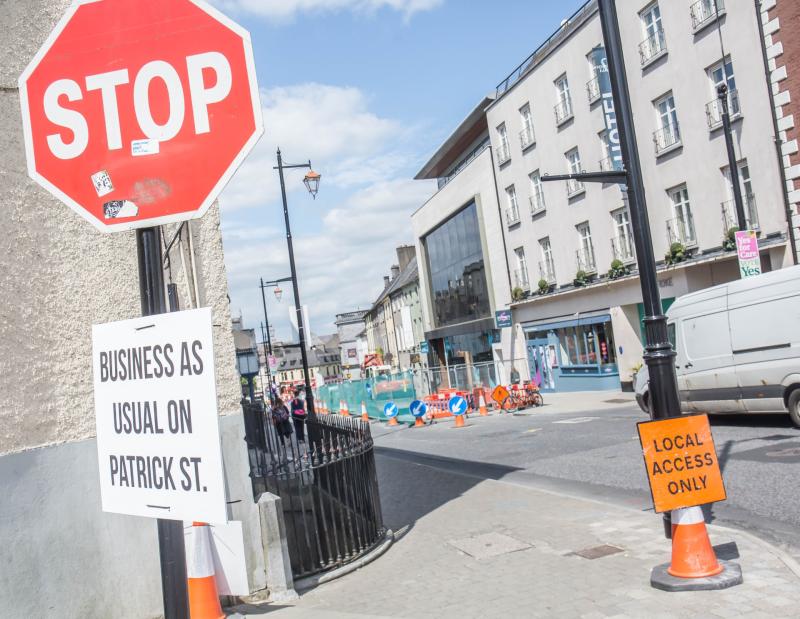 'Irish Water regrets any inconvenience caused by this work'

Frustrations are mounting on Patrick Street in Kilkenny as businesses feel the bite of reduced footfall and slowed trade due to disruptive roadworks taking place in recent weeks.

Large ‘Road Closed’ signs have been in place with the normally-busy city centre street reduced to one lane inbound-only, and digging taking place during business hours.

Owner of Top Hat, Patricia Keane, says she has noticed a considerable decline in footfall. Passing trade is a key part of her business.

“There is nobody in my shop,” she says.

“May, June, July — it should be buzzing at this time of year. There is no one going past. And now the whole month is gone.”

Her comments are echoed by Laura Rose, who works in the Office Centre, and says it is ‘massively’ affecting the business.

“Everyone coming in is saying it’s hard to park,” she says.

"Not having the loading bay is a huge problem. It's going on a month now.”

While the ‘Road Closed’ signs have been in place from early on, it was only later that ‘Business As Usual’ signs arrived.

“It’s the time of year as well, with tourists,” says Ms Rose.

“We saw three cars going the wrong way yesterday and it could’ve been an accident. People are coming in asking how do you get to the Ormonde Hotel. There is no signage about a diversion — we had to create our own saying we’re open.”

You can forgive the frustrations. Last year, the street had to be dug up for the undergrounding of power lines and installation of public lighting. Then, as recently as Febuary of this year, the street was again down to one-lane for weeks to facilitate more work. Many of the businesses say the amount of notice given leaves a lot to be desired.

Hotels rely less on passing trade, but Ian Brennan of the Clubhouse Hotel says he has also noticed that his lunchtime trade is down. He also says he’s had to keep the front rooms out of use due to the noise from the street.

Mr Brennan says he understands the work has to be done, but criticises both the timing and the short notice given.

“We are a tourism business and they decided to start at the beginning of the tourist season,” he says.

“Not to mention the local impact of local people trying to walk or drive up and down the street. None of us are against them doing it, but it could be managed a bit better.”

Another hotelier, John Ryan of the Pembroke Hotel, agrees the work is a disruption to trade, but says it has to be done.
He says it’s not the best time of year, but in the winter it might have been dirtier and taken longer. However, Mr Ryan is not dissatisfied with the communication.

“They indicated they would keep in touch, and they have,” he says.

“There’s no way around it. It will eliminate leaks, and we have suffered leaks in the past.”

Responding to enquiries from the Kilkenny People, Irish Water said its project to replace old water mains in Patrick Street is progressing well and is on target for completion by the end of May. The project will result in a much more secure and reliable water supply for local businesses and residents.

"Irish Water and our contractors, Coffey Northumbrian Ltd, would like to thank local businesses for their support and valuable feedback as we work to maintain ‘Business as Usual’ during the course of this project. We are continuing to engage with local businesses to keep them informed of progress and to work with them to ensure disruption is kept to an absolute minimum during these essential water network improvement works," said a spokesperson.

"We have also met with other stakeholders, such as local schools, to keep them informed about the progress of this project.

Works are now substantially complete at the junction of Patrick Street and the Parade. This section of the project was particularly complex and presented significant challenges due to the high density of underground services in the area. Crews are now working along Patrick Street where good progress is being made.

"In order to ensure that the work is completed on schedule ahead of the start of the busy tourist season, additional resources have been deployed and crews have been working extended working hours where necessary. We expect that all the works involving traffic management will be completed and crews moved off site by May 31. There may be some minor connection work required to take place the following week but this will generally be confined to the footpath/parking bay and should not have any major impact on traffic.

"Irish Water regrets any inconvenience caused by this work and again thanks local businesses, residents and other stakeholders for their patience and support as we work to complete the project on schedule."

Details of work in the area are available on the Service and Supply updates section of the Irish Water website at or via Irish Water’s 24/7 Customer Care line at 1850 278 278.