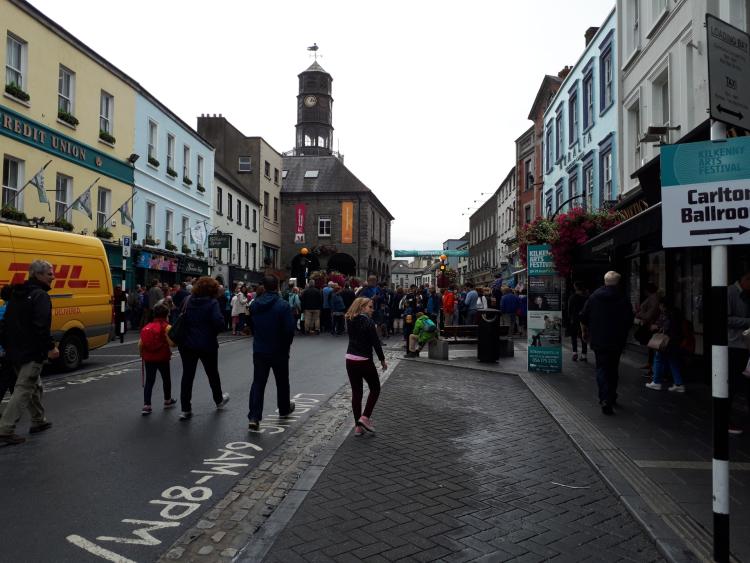 High Street was closed today to vehicular traffic between noon and 3.30pm, and will be again tomorrow

A local councillor and former Mayor of Kilkenny City has said the ongoing temporary closures of High Street to vehicles are hurting local shops, and needs to be seriously reconsidered.

Cllr Andrew McGuinness says he has spent the afternoon visiting around 80% of the High Street shops, and 'the vast majority' are badly affected by the closure, which took place last weekend, and again today between noon and 3.30pm. It's due to happen again tomorrow afternoon.

"Some shops said they've sent staff home early, others complained about the volume of the music - they said they've had to shout at customers or close their doors," Cllr McGuinness told the Kilkenny People.

"Everyone acknowledges there's a good atmosphere, but it's not transferring into shops and into trade. While some shops are doing okay, it's because it's back to school time, and if it wasn't for that, they would be drastically down."

His comments were echoed by High Street business owner Ann Ryan, who says trade was negatively affected, and that consultation with local businesses regarding the closures could have been a lot better. She said while the band that played was very good, it was not the right place for them.

Similarly, Cllr McGuinness said other locations may be more suitable for the entertainment.

"It needs to be revised or needs to be moved to areas we have for this type of thing, like the Parade, Canal Square, or parts of Kieran Street," he said.

"It's not encouraging shoppers to walk up the middle of the road; they're sticking to the paths anyway. Right now this is hurting High Street traders, and at a time when they should be making a bit more money - during the Arts Festival."

On Tuesday, Kilkenny Chamber of Commerce said there had been a 'varied' response to the first weekend of temporary pedestrianisation.

"I'm calling on Kilkenny County Council to revise it, and work with businesses to come up with a proper plan to the benefit everyone on High Street," he said.

"It's time for the council to put their hands up and say 'maybe this is not working'. It's not a bad thing to learn from experience and move on now in a positive and progressive way."