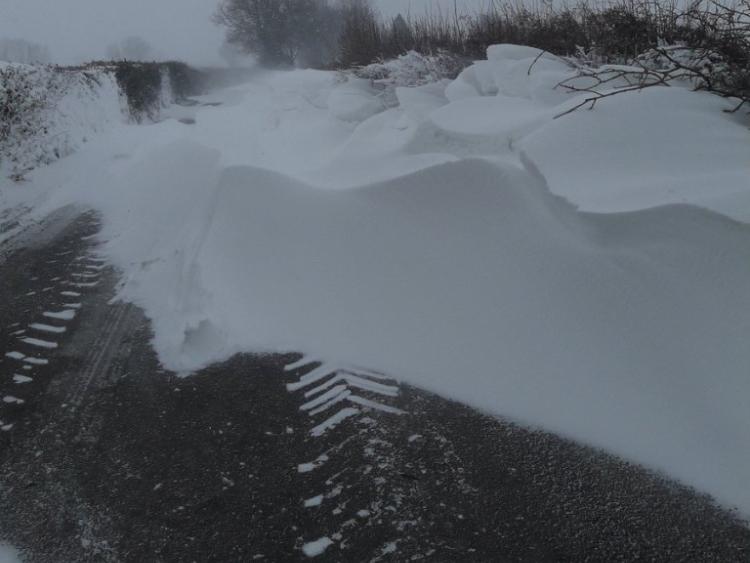 March 2018: Road blocked from snowdrift in Kilkenny during Storm Emma

Mayor of Kilkenny Peter 'Chap' Cleere has expressed his 'shock and disappointment' that Kilkenny has yet to hear back on a funding application made to the Department to help with damage done to the county's road network during Storm Emma in March.

The extreme weather event in March saw a Status Red snow and ice warning in effect, and the icy conditions and heavy snow, and necessary gritting took their toll on the roads. At Friday's meeting of the Kilkenny City Municipal District, Mayor Cleere asked director of services Tim Butler for an update.

Mr Butler replied that the local authority has been informed it is to receive €350,000 in funding for the clean-up costs, but that the council had also applied for €3.5 million of additional funding to repair the many roads around the county affected. He said that, to date, the council had not received any response from the Department regarding this request. He said he was aware that other local authorities had made similar applications.

The Mayor welcomed the €350,000 for the clean-up costs, but expressed his disappointment that there was no movement on the additional roads funding.

"There was an awful lot of talk and spin from the Government at the time of the storm of how funding would be made available, and it's very disappointing to realise not only have we not received any funding to repair the damage, the Department don't even have the decency or respect to inform the local authority of whether it will receive funding or not," he later told the Kilkenny People.

Mayor Cleere said the lack of response is 'not acceptable, and that the Government of the day would want to realise that there are people living outside the M50, who shouldn't be punished because they have a Kilkenny address'.