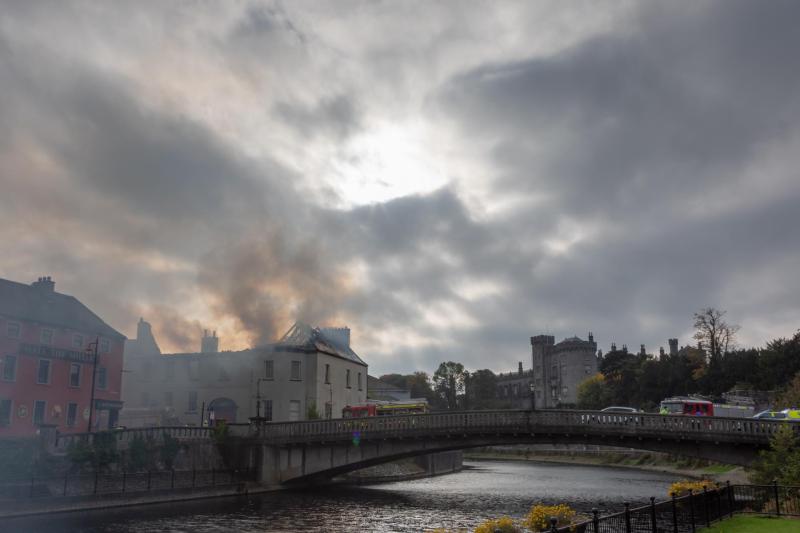 Fears over the structural safety of the burned-out historic building in Kilkenny City mean a portion of a central city street will remain closed today following a significant fire.

Speaking to the Kilkenny People, Chief Fire Officer John Collins said that engineers had arrived on site last night, and were assessing the damage to the building, with a view to determining what was necessary to make the structure safe.

Pedestrian access has now been facilitated on the Matt The Millers side of John's Bridge, but the road remains closed to vehicular traffic. It's understood that a number of chimney stacks on the fire-damaged building are a source of concern.

Chief Fire Officer Collins told the Kilkenny People that an initial assessment must be done by engineers before measures can be place to make the building safe, particularly given the weather forecast of inclement weather and wind.

The major fire engulfed the historic Bridge House on John Street in Kilkenny yesterday morning around 8.30am.

Fire units from as far away as Freshford and Callan rushed to the scene today shortly after 9am. They were joined by the Incident Command Unit from Castlecomer, which is deployed in the event of a significant incident.

Both Firefighters and Gardaí searched the John Street property, ensuring the safety of any possible occupants. Thankfully, said Chief Officer Collins, no one was injured.

However, Chief Officer Collins said that substantial damage had been done to the building, including the collapse of the ceiling and a number of floors.