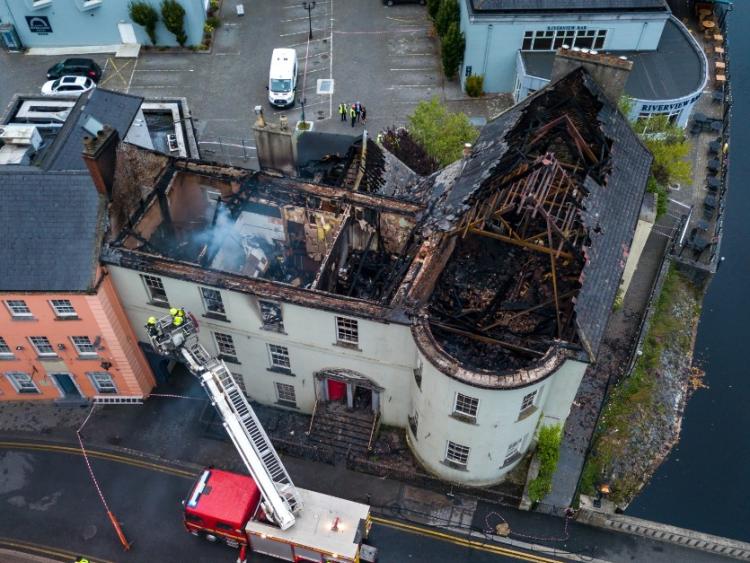 A birdseye view, taken by drone, of the damage done to the Bridge House on John Street in Kilkenny following a fire yesterday. PICTURE: PJ DUNNE

Efforts are under way to stabilise what remains of the burned and gutted Bridge House on John Street ahead of the Status Yellow strong wind warning due to come into effect this evening.

Chief Fire Officer John Collins said that engineers arrived on site last night and today to assess the damage to the structure. As is obvious from these pictures, taken by drone pilot PJ Dunne, the roof and a number of floors in the building have collapsed, and considerable damage has been done. Remaining chimney stacks on the fire-damaged building are a source of concern.

Kilkenny County Council has said that works are now under way to stabilise the building so that it does not pose a collapse risk or a risk to the passing public.

John Street will remain closed to vehicular traffic from Bateman Quay to Maudlin Street until the stabilisation works are complete. Businesses on John Street are continuing to operate as normal. Pedestrian access to John Street is unaffected.

The major fire engulfed the historic Bridge House on John Street in Kilkenny yesterday morning around 8.30am.

Fire units from as far away as Freshford and Callan rushed to the scene today shortly after 9am. They were joined by the Incident Command Unit from Castlecomer, which is deployed in the event of a significant incident.

Both Firefighters and Gardaí searched the John Street property, ensuring the safety of any possible occupants.