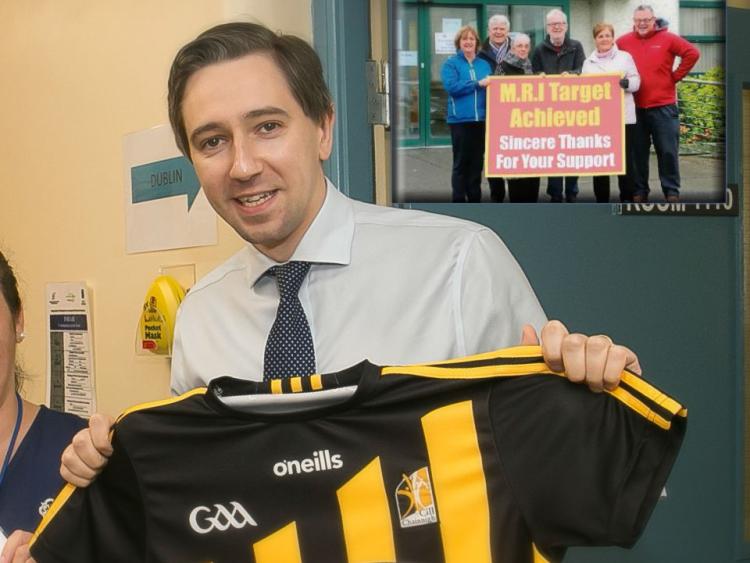 Main: Simon Harris visits St Luke's Hospital in July 2018. Inset: Two years ago, the Friends of St Luke's announce they have reached their fundraising target for an MRI

Two years after the Friends of St Luke’s Hospital reached their fundraising goal for an MRI machine for the local hospital, there is still no sign of the machine, despite commitments to providing the balance of funding by the HSE.

The hospital has no MRI, and patients are left having to travel elsewhere to access the scans. In 2016, after much hard work and fundraising, including help from the community, the Friends finally reached their target of €250,000 to help fund one. The HSE said it would provide the remainder in its Capital Budget, and approved an initial allocation.

In July of this year, Minister for Health Simon Harris visited St Luke’s Hospital, where he announced he would release the outstanding funds to allow the MRI project to go to tender. However, almost four months later, the Friends of St Luke’s Hospital say there doesn’t seem to have been any progress.

“Minister Harris came down here in July and in public said this was going ahead,” says Friends chairman Declan McCann.

“He said the figures would have to be rechecked, but then they would go to tender and expect to have shovel to ground by February, with a four-to-six month build. But now there is a delay. What’s causing the delay?”

Frustrations are centred around the fact that while the Minister gave the go-ahead for the project, there has been no explanation as to why its delivery has been delayed. Now, there are doubts over whether an MRI for St Luke’s is being regarded as a priority.

“I can’t understand why it’s being held up,” said Mr McCann.

“There seems to be some sort of backlog in the HSE. What we want to know is, is there a will for this to happen? And if so, when?”

In 2017, the HSE confirmed approval of €2.45 million for the MRI, while in July this year, a further €1.25 million was confirmed to fund all capital costs.

Mr McCann now says that the delay in realising the MRI is beginning to affect the work of the fundraising committee.

“We would like to know where the project is and can we rely to have this MRI up and running in the first half of 2019.”