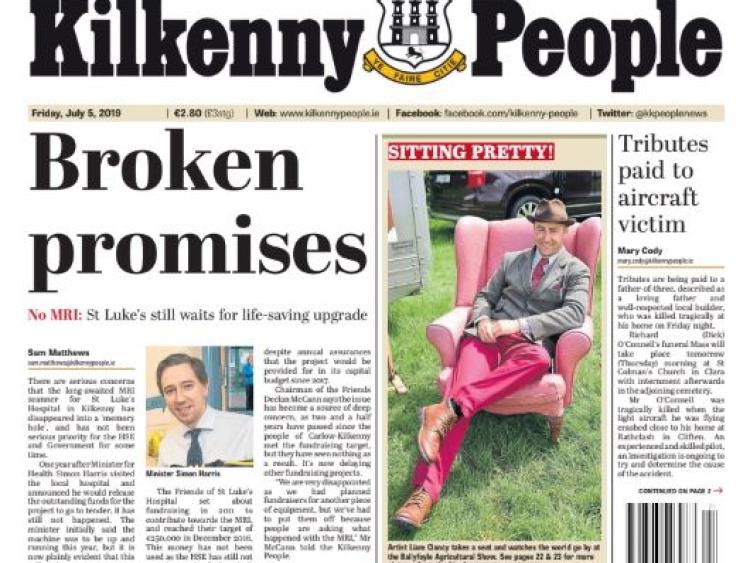 A local councillor is seeking to make sure that the much-needed MRI scanner for St Luke’s Hospital remains firmly on the agenda, and wants support from his colleagues to make their views known to the Minister for Health.

Cllr Pat Fitzpatrick is bringing a Notice of Motion to the July monthly meeting of Kilkenny County Council hoping to keep the issue in the spotlight until it is resolved. He says it’s vital that the machine is delivered soon. The motion reads: “Kilkenny County Council calls on the Minster for health to immediately release all out standing funds to allow the MRI Scanner Project in St Luke's Hospital proceed with out any further delay.”

Almost a year after Minister Simon Harris visited the local hospital and announced he would release the outstanding funds for the project to go to tender, it has still not happened. He initially had said the machine was to be up and running this year.

The Friends of St Luke’s Hospital have raised a sum of €250,000 to go toward the project, but this money has not been activated yet. This is despite annual assurances from the HSE that the project will be provided for in its capital budget.
Chairman of the Friends Declan McCann says this delay is now holding up other fundraising projects.

Last week, when the Kilkenny People enquired as to what the delay is, the Department of Health yesterday said the project was ‘ready to go to tender’.

“The HSE has advised that the MRI Project in St Luke’s Kilkenny is ready to go to tender, and the Department of Health is continuing to work with the Department of Public Expenditure and Reform and the HSE to finalise, as soon as possible, a multi-annual Capital Plan for the HSE,” said a spokesperson.

“The Capital Plan will determine the projects that will progress in 2019 and beyond having regard to the available capital funding, the number of large national capital projects currently underway, the cashflow requirements attaching to each project and the relevant priority.”