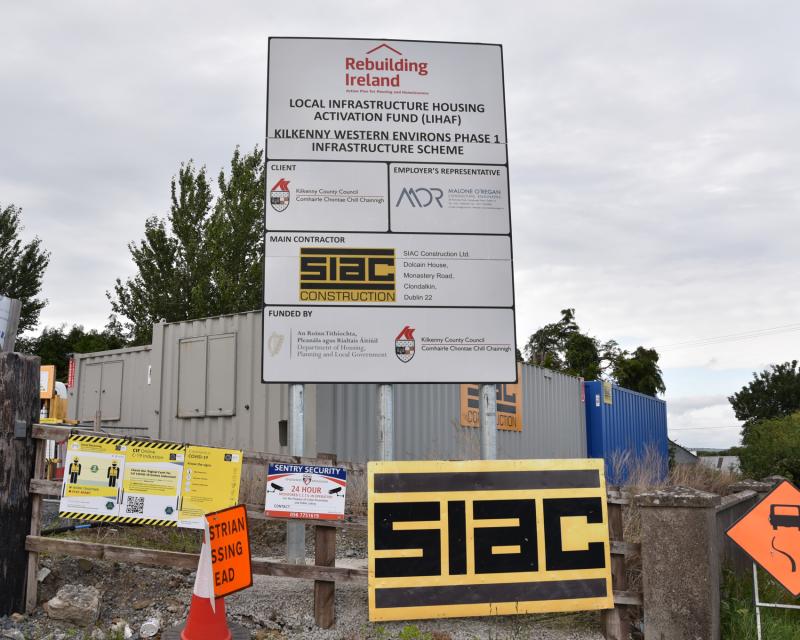 The major road project under construction in Kilkenny City’s western environs will now likely not be completed until January next year, and may run up to €2.3 million over-budget.

The purpose of the Breagagh Valley scheme is to open up land for up to 3,000 new houses by 2030, two schools, and a linear park. The scheme is 2.3km in length and includes for a new distributor road from the N76 Callan Road to the Circular Road, and the widening and upgrade of existing roads.

The project is part-funded by the Department of Housing under LIHAF, to the tune of €6.5 million, with a matched figure from Kilkenny County Council, for a €13 million total. However, that figure could rise up to €15.3 million — and if it does, it’s not clear who will have to foot the bill for the overrun.

The sod was turned on the scheme last March, and was originally due to be completed in September. However, the onset of Covid-19 saw work halted on the site for a period of around seven weeks. Other large infrastructure projects around the country, including the new National Childrens Hospital, have also faced delays and potential Covid costs.

Kilkenny County Council is now awaiting a final programme from the project’s main contractor, Siac Construction Ltd. At Friday’s meeting of Kilkenny City Municipal District, the site’s resident engineer Kieran Kelly told councillors that January of 2021 is the new estimated completion date ‘at the minute’. He said the contractor had informed him of this verbally.

Mr Kelly said the council was also seeking guidance from the Office of Government Procurement (OGP) on any potential Covid costs and by whom they should be borne.

Cllr David Fitzgerald said that an additional €2.3 million was an increase of 18% on the original costing: “How are we going to pay for that?”he asked.

Director of services Tim Butler said the council had been in contact with the OGP on the matter. He said the €6.5 million had been secured under LIHAF, and the local authority would be seeking more should any additional costs arise.

Prior to Friday’s meeting, Cllr David Fitzgerald had sought an updated completion timeframe, and expressed his concerns that people ‘living in the middle of a building site’ had no idea how long it would continue.

Cllr Fitzgerald also said that people living in surrounding areas were experiencing a significant increase in traffic volumes, and it was not fair on them.

Meanwhile, work has largely resumed on the western environs site, however, it has also emerged that at least one subcontractor has withdrawn from the site over a payment dispute. Attempts by this newspaper to contact main contractor SIAC Construction for comment were unsuccessful.