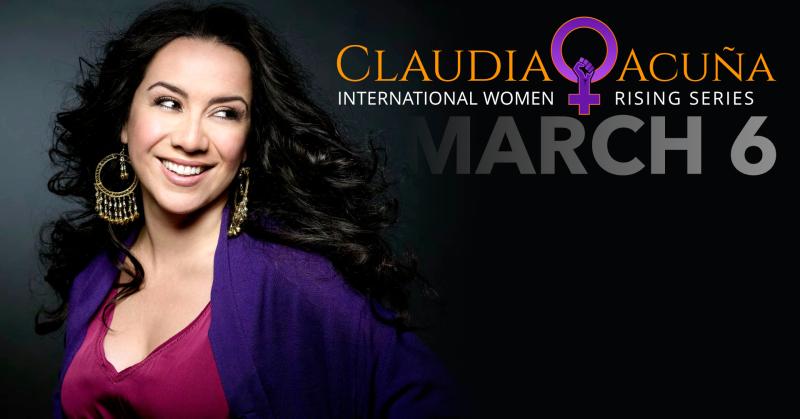 An eclectic presentation of theatre and music from around the globe will form an integral part of the #watergateonline programme.
Watergate Theatre Director Joanna Cunningham is pleased to introduce the Watergate’s partnership with US-based company Third Row in.
Ahead of International Women Day #IWD2021, the Watergate Theatre presents Latin Grammy Award Nominee Claudia Acuña in partnership with Third Row on Saturday March 6.
This broadcast will feature a six-camera shoot to capture the intimacy of Claudia’s performance. Audience members will be invited to join via Zoom so they can “be seen” by the artists on a video wall in the orchestra pit.
Dreams
Claudia Acuna grew up in Chile where, as a young woman, she dreamed of performing in the iconic jazz clubs of New York City. She fell in love with this unfamiliar music while listening to international stations on her radio.
At age 20, she sold all of her possessions and emigrated from Chile to the US with no English and little more than her ambitions. Before long she began appearing at jam sessions and gained recognition as one of the most intriguing and original vocalists on the scene.
“She sings in the tradition of the great ones - her sound is her own,” remarked the legendary jazz vocalist, Abbey Lincoln.
For her performance on #IWD 2021 Claudia will be joined by Pablo Vergara on piano, Carlos Henderson on bass, Juancho Herrera on guitar, and Rodrigo Recabarren on drums.
Celebration
Join us in the celebration of the vital contributions of women in the arts ahead of the 2021 International Women’s Day. This concert will be a musical tapestry that weaves together 10 years of Claudia’s work from her debut album on the legendary Verve Records to her most recent Latin Grammy-nominated album, Turning Pages. The program serves a retrospective on her career and chronicles Claudia’s journey from her birthplace in Chile to her home in New York City.
Tickets are €15. For more information or to book see watergatetheatre.com