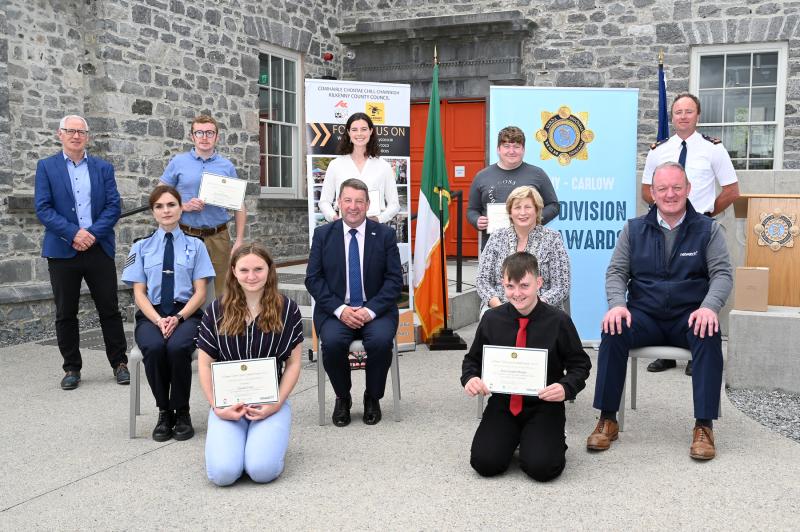 Young people who went the extra mile and are an inspiration to their community were recognised at the Garda Youth Awards.
The award winners from were honoured in a series of awards ceremonies across the three Districts of Kilkenny, Carlow and Thomastown on Monday.
An Garda Síochána, in association with Netwatch, Carlow County Council and Kilkenny County Council, launched the search for a young person or group of young people who have achieved extraordinary things in February this year.
Ten exceptional young people were presented with awards in recognition of their achievements. The judges, Chief Superintendent Padraig Dunne, Mick Galwey - Netwatch, Retired Judge William Early, Catherine Byrne-Murphy – Kilkenny County Council, Michael Brennan - Carlow County Council, Kathryn Wall - Carlow Youth Services, chose the winners from a pool of over 60 nominations.
Kilkenny winners were presented with their awards at a ceremony in the Butler Gallery. Dean Campbell Murphy won The Special Achievement Award and is a remarkable young man that has been recognised for his devotion to his family. Dean (15) who is on the Autism Spectrum was severely burnt as a toddler and spent many months in hospital as a result. Dean was bullied growing up and as a result his mental health suffered despite this he helps he helps out at home caring for his younger sister who is also on the spectrum and his brother who has special needs and another younger brother with special dietary needs.
Millie Brennan was the Community Safety Award winner. Millie who has a natural talent for sewing made face masks during the first lock down, She sold the masks for a small fee and donated all of the proceeds (€778.70) to a local charity, Thomastown Community Helpers. Millie who was only 12 years of age at the time was inspired to raise money for the charity after her grandad passed away in May of last year.
Thomas Morris won the District Award for Kilkenny. Thomas has been involved in a number of voluntary organisations in his community from his teenage years. Over the past five or six years, he has been an active volunteer, presenting youth programmes on Community Radio Kilkenny City. These programmes include young people and appeal to the young.

The Thomastown District Award went to Kevin Fitzgerald. Kevin is nominated in recognition of his courage and quick thinking with his community needed him. Kevin put his knowledge and skill to use when a member of his community suffered a cardiac incident. Kevin calm and quickly used the community AED and was able to save a life. He is to be commended for his brave actions.