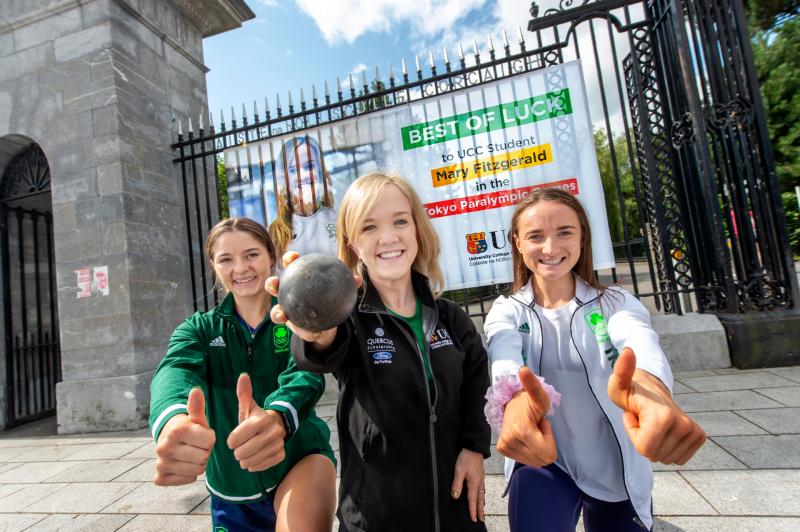 UCC student & Quercus scholar Mary Fitzgerald who will compete at the Paralympics which gets underway in Tokyo on 24 August, with UCC Team Ireland athletes Tara Hanlon and Mags Cremen

University College Cork (UCC) has unveiled a banner on its old historic gates in support of its current student and Paralympian, Mary Fitzgerald, who will represent Team Ireland at the games in Tokyo.

With the action set to get underway in Japan on 24 August until 5 September, third year Occupational Therapy student and Quercus Scholar, Mary Fitzgerald and alumni Patrick O’ Leary (Canoeist) and Niamh McCarthy (discus) are members of Ireland's team of 29 athletes who will compete at the games.

Kilkenny native Mary (21) will be making her debut at the Game in the F40 shot put. Mary won three gold medals at the 2019 IWAS World Games in the United Arab Emirates, and this summer won a bronze medal in the shot put for Ireland at the Para Athletics European Championships in Bydgoszcz.

“I am extremely grateful to everyone at UCC, the Ford Quercus Scholarship programme, and the Department of Occupational Therapy for their continuous encouragement and support on my journey to the Tokyo 2020 Paralympic Games. I am incredibly lucky to be surrounded by people who always encourage me to dream big,” stated Mary.

"We are extremely proud of our athletes competing at the Paralympics and we wish Team Ireland the very best of luck. The generous support of Ford Ireland and Bank of Ireland must be recognised at this time, as this ongoing assistance helps provide the foundations for our athletes to compete," stated Professor John O'Halloran, President of UCC.