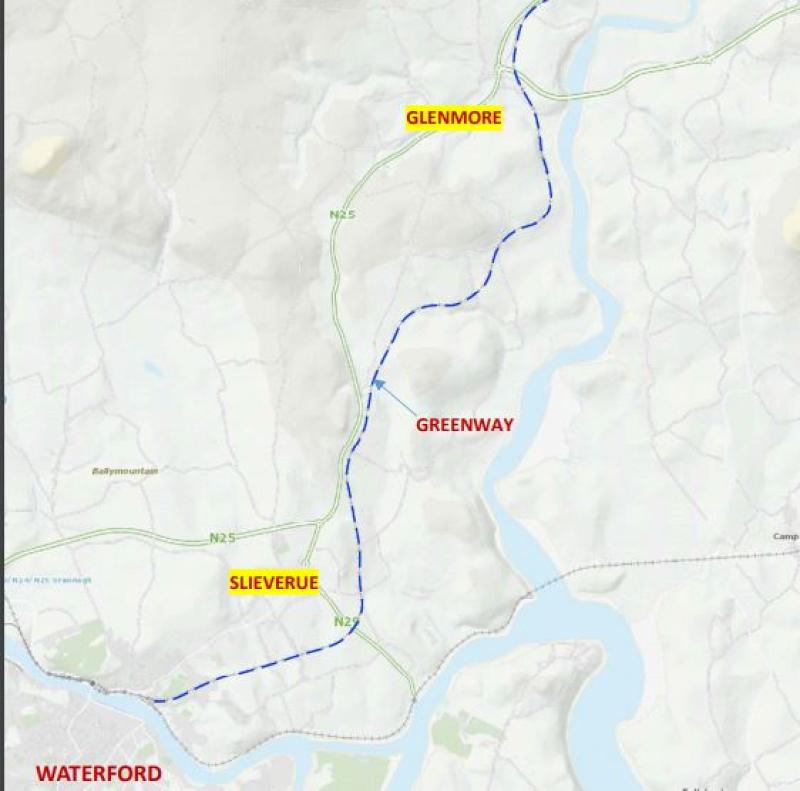 Route options for the pedestrian and cycle routes to Glenmore and Slieverue via the South-East Greenway have been developed and assessed, and route preferences have emerged.

The preferred route to Glenmore village sees the greenway split around 1.8km north of the village, adjacent to the N25 roundabout (also the location of the proposed Ballyverneen greenway car park).

From here, cyclists will be able to travel to Glenmore via the Cappagh Road (L5710) through an underbridge that’ll run underneath the N25.

A three metre wide cycle path is proposed to run alongside the Cappagh Road to keep the route off-road in nature.

An alternative route via Glenmore River was envisaged but was assessed to be too costly in nature.

No designated archaeological or architectural heritage sites were noted in the proposed development area.

The route winds alongside the L34141, the minor road that you can exit from the Luffany roundabout.

It will require a footbridge over the N29 just before Slieverue Roundabout.

The route will then enter Slieverue.

This route, combined with a connection to the greenway at Kilmurry, have been identified as effective to meet the objectives of the scheme.

The South-East Greenway will be a 24km cycling and walking route linking New Ross, County Wexford with Ferrybank through South Kilkenny.

The greenway extension scheme to the villages of Glenmore and Slieverue is being spearheaded by Kilkenny County Council, Kilkenny Leader Partnership and Trail Kilkenny.

As the South-East Greenway remains an active construction site, the public are advised not to enter the site at any point due to health and safety risks.