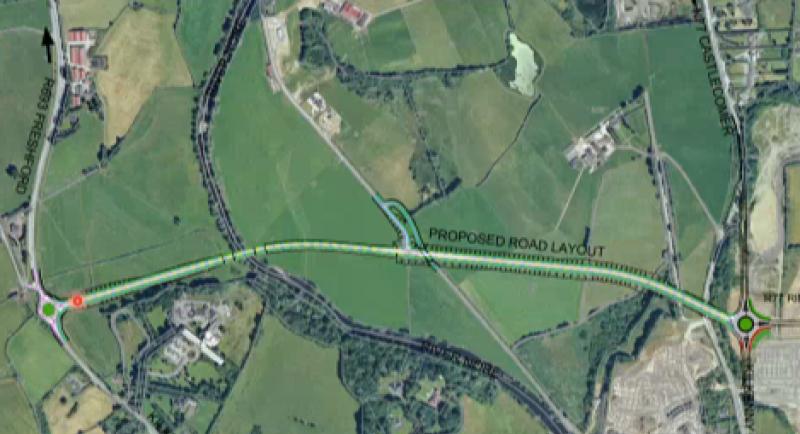 A proposed road map for the ringroad extention, joining the Freshford Road just behind Aut Even Hospital

There’s a palpable feeling of ‘we’ll believe it when we see it’ that rises to the surface now any time the completion of the Kilkenny Ring Road is brought up.

That feeling is very much justified, especially if we’re talking about fully completing the ring road.

The simple truth is that it could very well be decades until a full and unbroken ring winds its way around the city.

Despite this, signs are promising that at the very least, another 1.5km section will span the River Nore and connect the Northern East and West side of the city before 2030.

Why are signs good?

Well, the current plan for an extension of the ring road from the Castlecomer Road Roundabout to the Freshford Road is currently at stage zero of a seven stage process.

Why are we at stage zero? Wasn’t there plans in place for this years ago and nothing was done?

Plans for this ring road extension had been drafted as far back as 2013 but they had to be shelved at the time following a legal challenge that went all the way up to the European level.

Because of this, the planning process must begin all over again now due to changes in planning policy since the previous proposal.

So all that previous planning was for nothing then?

“The work done on the scheme in the past will be helpful to us,” Dermot Donovan of Roadplan Consulting has stated, however he also acknowledges that the planning process must begin afresh.

What is stage zero? What does it entail?

At stage zero, the current stage, a strategic assessment report is being drafted and will be submitted to the Department of Transport in mid-to-late August.

Well, according to Dermot Donovan: “We will then have to redo the environmental surveys given the gap [since the 2013 plans], that’ll be two years, it will take a year to get response from An Bord Pleanála, we tender a year after that and construction will take about three years, so it’ll take about seven years total.”

Keep in mind that this timescale is only feasible if everything goes to plan and there are no major hiccups.

Number of pubs operating in Kilkenny drops substantially since 2005

What’s the story with the landowners who will be affected?

Consultation will begin with affected landowners and the public in the later stages of the planning process, once the strategic assessment report is approved by the Department and detailed plans are drawn up.

Mayor David Fitzgerald acknowledged that there may be significant concerns from local landowners and stressed the importance to engage with all those that previously objected to the scheme by publicly inviting them to attend meetings.

Why do we even need a ring road extension?

Some of the benefits of the ring road extension outlined to councillors at a recent meeting included the reduction of traffic, HGVs and emissions in the city centre and improved response times for emergency vehicles to incidents.

Are there any concerns being raised?

Some councillors did raise concerns about certain aspects of the proposal and asked them to be taken into consideration.

Many councillors stressed the importance of public consultation to the fate of the project, including Cllr Peter ‘Chap’ Cleere.

“Public disapproval of the CAS bridge led to €2.7 million worth of obstructions. We don’t want a repeat of that. Let’s get the whole county behind this,” he said.

Are any councillors pushing for the ring road to be completed in full?

Many councillors asked for plans to be drafted for the further development and expansion of the ring road as plans for this extension advance.

Director of Services at Kilkenny County Council, Tim Butler, addressed their concerns in his remarks in response.

“This current proposal to link the Castlecomer Road and the Freshford Road will be the most expensive link. This extension measures approximately 1.5km and contains a substantial bridge over the River Nore.

“When we try to connect the Freshford Road to the Kilmanagh Road, that will most likely have to be covered under our own funding, not the Department of Transport.”

So how much will this new link cost?

The estimated cost of this proposed extension from the Castlecomer Road to the Freshford Road is between €30-40 million.

The Department of Transport will consider the scheme once they have received the strategic assessment report and it will then proceed to the next stage.