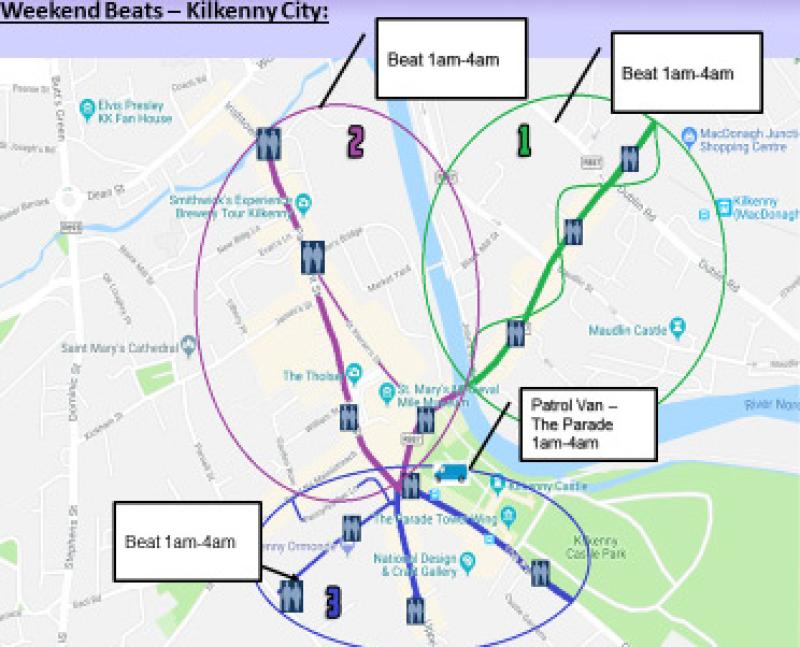 Gardaí in Kilkenny have launched Operation City Safe as part of the county’s efforts to get Purple Flag accreditation.

Sgt Laura Dragoi gave a presentation to members of Kilkenny’s Joint Policing Committee last week where she outlined the policing plan to create safer socialising in the night-time economy in the City.

The Purple Flag standard is a European wide initiative that recognises an area as safe and a welcoming place for visitors and residents.

The Gardaí have carried out an analysis of incidents in 2017 to inform the policing plan. There were 194 assaults in the City last year and “most” of these happened on Friday, Saturday and Sunday between the hours of 10pm and 4am.

Sgt Dragoi said there were 548 Public Order incidents and the majority of these happened over the same few days between 11pm and 3am. She told the meeting that 63% of all these incidents occur from Saturday to Monday.

The Garda analysis found the incidents were clustered in areas like John Street, RoseInn Street, Ormonde Street, The Parade and High Street.

Cllr Patrick McKee noted that John Street and RoseInn Street had the “whole road nearly blotted out” with assaults.

Sgt Dragoi said the Gardaí would be focusing on the “hotspots” of these incidents. The action plan - which began last Friday - will see high visibility beats (pictured) and patrols as well as a static high visibility point on Bateman Quay.

The Gardaí have also been in discussion with coach operators in recent weeks and the coaches will disembark passengers on Bateman Quay and collect them there too.

The coach drivers have also been informed of the expected standards of behaviour from those visiting and the Gardaí will be distributing leaflets too.

A Garda on a motorbike will also be there at the drop-off between 10pm and 11pm and 2am and 4am.

Sgt Dragoi said people are drinking on buses and are relaxed and when they arrive, they’re drunk. She said drunk patrons “will be returned into the custody of the coach driver”.

A patrol van will be parked on The Parade also as part of the plan. There will be three different beats covered by up to two Gardaí.

For example, Beat 1 will cover John Street from MacDonagh Junction to John’s Bridge.

She told those present that the benefits of the policing efforts as part of the Purple Flag initiative include a “raised profile, improved public image, increased expenditure in the town and lower crime rates”.

The plan will be reviewed regularly, the meeting heard. Chair of the JPC, Cllr Fidelis Doherty, raised concerns that bus drivers won’t take responsibility for a “lad or lassie drunk and they will go off and park somewhere else” but she added that “overall it was a very good plan”.

Chief Superintendent, Dominic Hayes, said it was a plan and there might be tweaking of it required as time goes on. He added: “The visibility will make a huge difference.”

Chief executive of Kilkenny County Council, Colette Byrne, said the local authority are supportive of the Purple Flag initiative but that policing is “only one element of the process”.

The Council have their own responsibilities of cleaning the city. Ms Byrne added that they need to get all other stakeholders committed to the project as well.

Areas which have a Purple Flag include: Killarney, Ennis and Waterford.

One councillor here has suggested bringing in a mounted Garda unit for Kilkenny City as part of the plan.