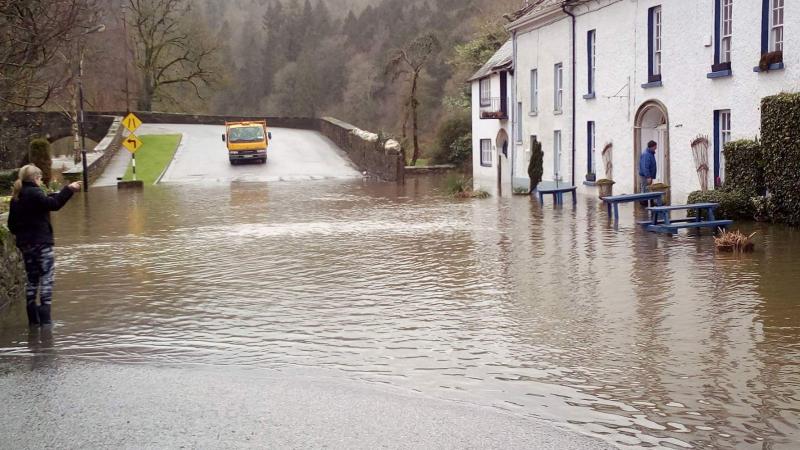 Flooding in Inistioge in 2018

Callan-Thomastown Municipal District councillors have welcomed new details on the Ballyhale flood relief scheme but say that more urgency is needed to advance similar works in the region.

There are currently up to 33 residential properties in the village at risk of flooding at present.

A new riverside walkway and enhanced landscaping works are also included in the plans.

Cllr Deirdre Cullen welcomed the proposed scheme and asked DBFL Consulting Engineers representative John Carr if it remains on track for construction in 2023.

Her question was motivated by the fact that ‘similar works in Thomastown and Inistioge, where flooding has caused immense damage in the not-so-distant past, have been lagging behind’.

Mr Carr stated that the plans for the scheme will be lodged with An Bord Pleanála next year and that they will be expecting a decision in 2023.

After further discussion between the councillors, Cllr Cullen proposed that the other municipal districts in Kilkenny be approached in a bid to invite Minister of State Patrick O’Donovan TD to a full council meeting to explain their position in relation to Thomastown and Inistioge.

“We’re ready to proceed to go into stage one and just need a date. There are people who worry every year for their businesses, for their homes and as well for the safety of motorists, walkers and the general community,” she said.

“We need a flood relief scheme to keep people safe from adverse weather and flooding.”

Cllr Joe Lyons seconded Cllr Cullen’s proposal, noting that little was achieved from a previous motion to write to the Minister on the matter.

Cllr Patrick O’Neill stated that ‘there are lots of challenges in planning but anything that can be done to streamline the process will be welcomed’.