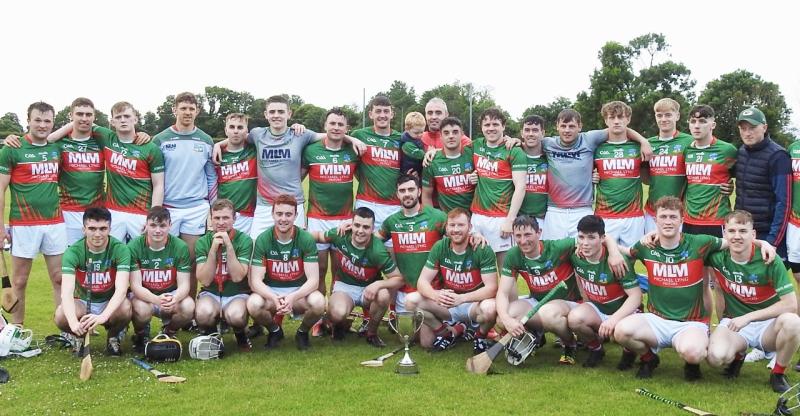 The Thomas Gleeson coached Rower Inistioge team were the better side throughout the 60 minutes as they made use of their opportunities with Kevin Murphy and Cathal Bolger starring up front for the winners.

Lisdowney stayed in touch with goals in each half from Brian Kavanagh and Cathal Jordan but they largely depended on the effectiveness of Kavanagh from placed balls and they will have plenty to work on ahead of the start of the Senior Hurling League/Championship in a couple of weeks time.

Kavanagh then knocked over a brace of efforts to bring his tally to three and the lead could have been much bigger for Lisdowney after Cathal Jordan had a shot saved by Paddy Lyng on the back of a crossfield ball by Willie Kenny that caught out the Rower defence.

Rower Inistioge captain and former Kilkenny star Kieran Joyce levelled the game at 0-3 apiece in the 10th minute and after Willie Kenny and George Murphy swapped points, it was the Rower who took complete control.

Five points on the bounce between the 15th and 20th minutes gave them a 0-9 to 0-4 advantage with Murphy, Cathal Bolger and Jack Walsh all finding the target with ease.

Incidentally Rower Inistioge’s only wide of the opening half arrived in the 24th minute and it was that ruthlessness in attack that gave them the edge.

The five point gap soon became six through points from Bolger and Murphy but Lisdowney did end the half with a bit of a burst.

Successive frees from Kavanagh and Michael Kenny got Lisdowney back to within five points before they got the game’s opening goal in the 29th minute when David O’Carroll passed off to Kavanagh and with huge space to run into, the corner forward took the opportunity to shoot to the net.

Kavanagh continued his fine form with three of the first four points of the second half as Lisdowney levelled up the game (1-9 to 0-12).

Rower Inistioge goalkeeper Paddy Lyng and wing back Pat Lyng kept the scoreboard ticking over but it wasn’t long until Lisdowney were in for another goal with Cathal Jordan finding the net on the back of a Cathal Bolger incisive pass.

That goal arrived in the 36th minute and at that stage Lisdowney led 2-9 to 0-13 but they only scored two more points with Rower Inistioge finishing in fine style.

With George Murphy and Cathal Jordan exchanging efforts, Lisdowney still led by two points but with the weather conditions worsening by the minute, it was Rower Inistioge who dealt with it the best.

Points from play by Cathal Bolger and Tom Murphy levelled the game for a sixth time before the Rower retook the lead with George Murphy’s sole point of the evening.

Lisdowney hit back with a Kevin Sweeney score but playing with a real swagger, the Rower knocked over the final three points with Kevin Murphy, Tom Doyle and Eoin O’Brien all on target.

Lisdowney had a late chance to try and force the game to extra-time but substitute Jack Dunphy mishit an effort that went tamely wide as a result.

A big win for Rower Inistioge that sees them pick up some early season silverware that should provide the perfect preparation for their return to the Intermediate Championship after suffering relegation from the senior ranks last term.