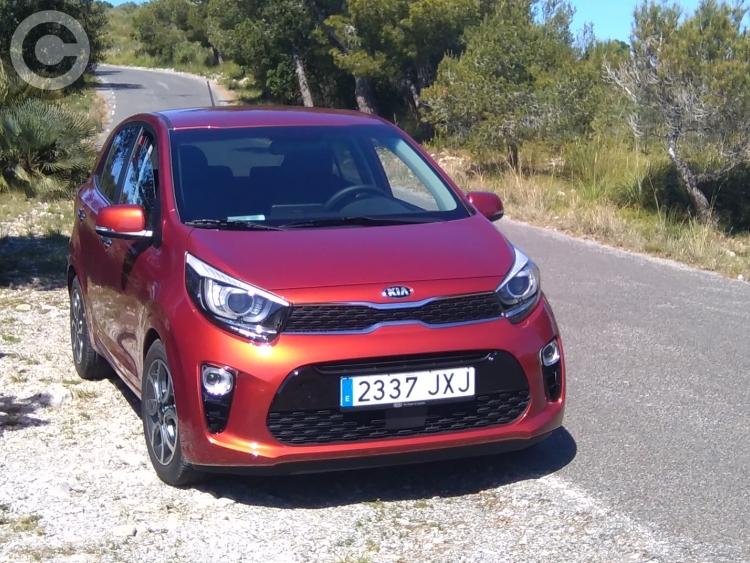 We all know about the 'hand me down' syndrome from big sibling to small, but do you know it goes on in motoring too?
Yes, costly features developed for and first introduced in big cars eventually find their way down to the smaller ones.
However, resizing elements to adapt for purpose help reduce production costs, much to the benefit of the smaller sibling.
That was the thought running through the mind when driving the impressive new, now available third generation Kia Picanto at the international launch.
Here is a car packed with serious safety features, plus hi-tech electronics, plus some spoiling and many practical features too, most of which were first seen on vehicles in a higher segment.
Assertive design
The latest Picanto boasts an assertive new design and a high-quality, high-tech new cabin, and it offers buyers greater potential for customisation and promises to be the most versatile car in its class.
Kia have a healthy share of the A segment here, but the market leader by a long way is the Hyundai i10.
In terms of pricing the new Picanto TX at €13,295 is €300 more expensive than the i10 Classic, and the Picanto EX (€14,795) is likewise €300 more than the i10 Deluxe.
What you get
However, in terms of the TX model this €300 buys you a newer model with a lower CO2 figure of 97 (v 108), plus Bluetooth, remote audio controls, electric heated mirrors, rear power windows, four speakers and leather covered SW and gearshift and body coloured mirrors and door handles.
The EX (€14,795 ) model comes with 15” alloys (v 14”) and the rear power windows not featured on the i10 Deluxe.
Even with the larger alloys the Picanto EX model still enjoys the lower 97 CO2 figure.
The Picanto also features an EX ADAS model (€15,195 ) that comes with AEB as standard. And around September, the high end GT Line version will arrive on these shores.
Picanto is built on an all new platform although the overall length remains the same at 3,595mm.
With the wheelbase extended to 2,400 mm (an increase of 15 mm), the wheels have been pushed further out to the corners of the car for a 25 mm shorter front overhang, making the car look more planted on the road.
Best in class
The new car provides best in class cargo room (up from 200 litres to 255; 1010 litres with the 60/40 split rear seats folded); a segment first in a sliding (55mm) centre console armrest and a first in segment floating type AVN.
Around 62% of Picanto buyers will be women, whose reasons for purchase will include general car characteristics, a cool appearance, fun drive and environmental issues.
We got to drive Picanto with the entry level 1.0-litre, 3-cylinder engine on a short test track in a car park, sweeping in and out through cones to see how the car handled and behaved when pushed as far as the driver's capabilities allowed.
It was a bit of fun, but there was a serious side to it too.
There was no lurching, no floppy feel when zig-zagging through the cones as we, apparently, simulated emergency situations that could arise during urban driving.
Steering sharp, precise
The steering was sharp and precise, the handling and general manoeuvrability of the car were top class, absolutely.
And when we took to the climbs in the mountains, the engine showed good energy levels and threw up an added bonus.
There was little or no sound in the well insulated cabin, compliments of a new soundproofing panel beneath the dashboard and in the floor of the cabin, while expandable sound-absorbent foam has been applied to lower sections of the A and B pillars.
Kia have a good car here, and it comes with the standard 7-year, 150,000 km warranty.

Fuel efficient
The 1.0-litre entry level 3-cylinder engine produces 67ps at 5,500rpm and 96 Nm torque. The engine is mated to a manual 5-speed gearbox. This is the most fuel efficient unit (3.9l/100km).
Upgrades to the engine include a new exhaust manifold integrated into the cylinder head, and a new cooling system with shut-off valve, reducing the time it takes the engine to warm-up from a cold start.
A new two-stage oil pump also reduces mechanical friction.
The 1.25-litre produces peak power of 84ps and 122 Nm of torque. Kia engineers have optimized the valve timing of the engine’s dual CVVT (continuously-variable valve timing) system, and have also adopted a similar new cooling system and shut-off valve to the 1.0-litre engine.
New low-friction coated piston rings also help to reduce cylinder friction for greater efficiency.
The Picanto meets the increasing trend towards 5-door models in the A-segment, with Kia discontinuing the 3-door model for the third generation car.
Inside the new Picanto provides occupants with more leg and head room than best-selling rivals in the A-segment.
Prices
Kia Picanto 1.0 TX €13,295 (annual road tax €180); 1.0 EX €14,795 (€180); 1.0 EX ADAS
€15,195 (€180); 1.25 EX automatic €16,495 (€270).