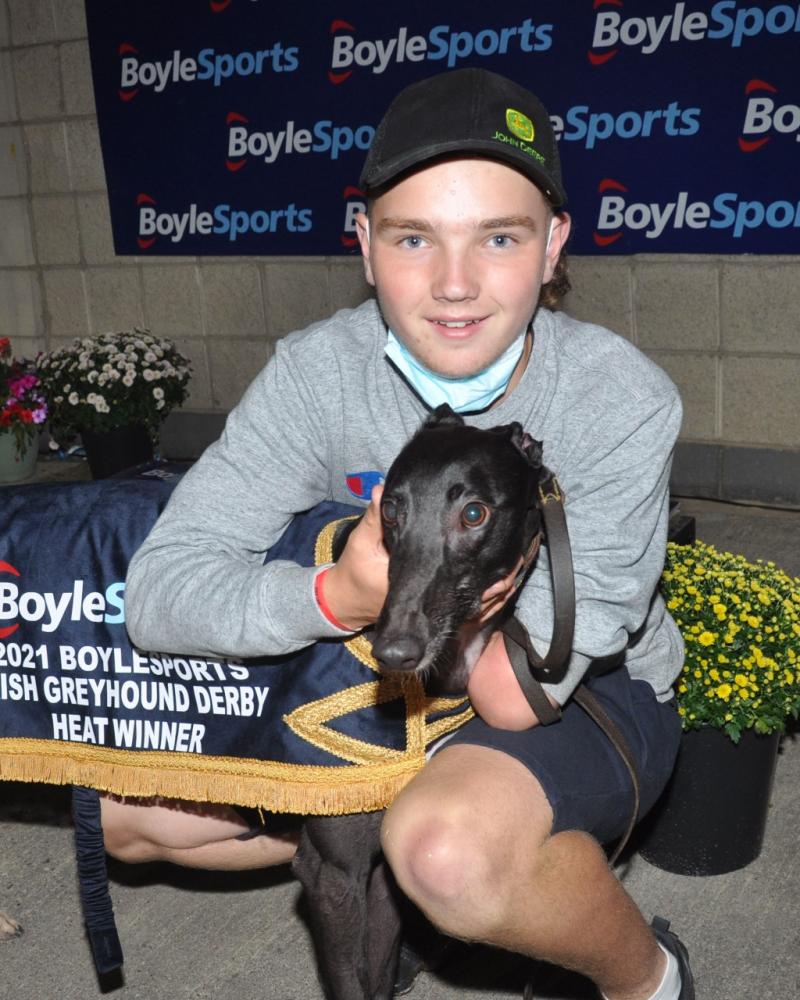 Michael Cronin, handler of All About Ted

Mooncoin trainer Peter Cronin sends two through to the quarter-finals of the €125,000 to the winner BoyleSports Irish Greyhound Derby.

Round three took place at Shelbourne Park on Saturday night and there were several sensational performances.

All About Ted, who is trained by Peter Cronin for Willie Rigney and Richard Brown, put down a real marker in Heat 5 when showing massive dash to dominate from the early yards.

His task was made somewhat easier with the fast-starting Deadly Destroyer and Singalong Sally clashing, leaving All About Ted to race clear into the bend.

Once doing so, All About Ted was never under threat. Deadly Destroyer turned second but was never going to worry the leader. In fact, Amidus Luke powered into the third turn to challenge for second spot and this saw the chasing pack bunch up. While all this was happening, Singalong Sally shot through on the fence to go second.

Gunboat Showman also ran on strongly to grab third but All About Ted was in a different parish to those in chase. The Peter Cronin trained son of Kinloch Brae and Enable remained clear to emerge a facile ten length scorer in 29.35. Singalong Sally held Gunboat Showman to take second by half a length.

Cronin also has Jazz Toes, who is owned by the Big-Bus-Synocate. A son of Taylors Sky and Yahoo Perlena, he's yet to score in the event but the talented tracker has done extremely well to make the quarter final stage.

Cronin has won numerous big race events throughout his career and he's one of Ireland's leading trainers. However, he's yet to taste Derby success despite having eight Derby finalists. Could this be the year?

The Paul Hennessy trained Priceless Jet was another to run well on Saturday night. The Gowran based trainer is no stranger to success in the world of greyhound racing and Princeless Jet, who is owned by Bryan and Kathleen Murphy, remains in the mix after another brave performance. A six length third to Ballymac Ariel and Explosive Boy, the strong running tracker keeps his name in the hat which is the most important thing.

Looking back on Friday's action from Kilkenny, Graigues Hill was the star of the show, clocking the best of the night in the closing race, a fine 29.26 in the A2 contest. Trained by popular local trainer Murt Leahy, the Martin Costigan owned runner came away from running from the trap two box and the classy early paced performer went on to land the spoils, making it a fourth career victory. Me Hope ran a cracker in defeat, just a head back in second place.

Gardaí are appealing for witnesses to come forward