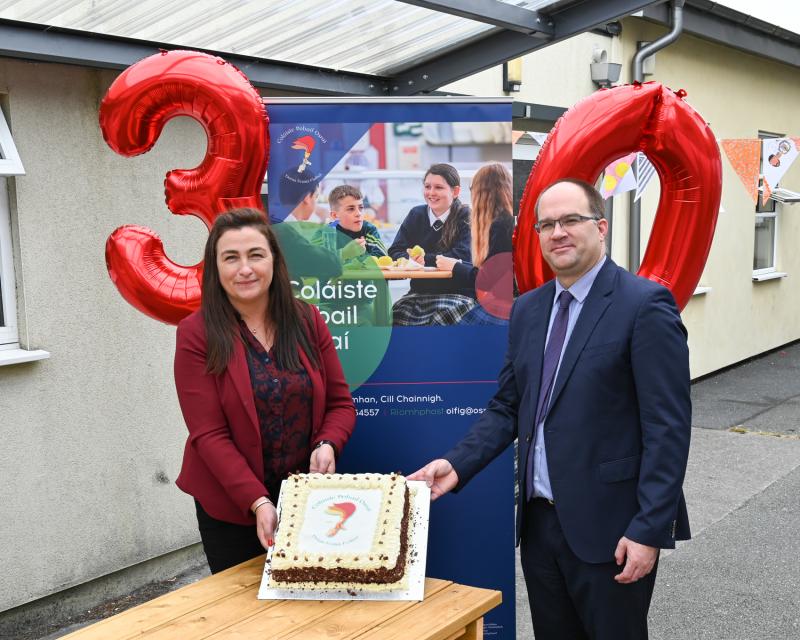 It was a day of great joy for Coláiste Pobail Osraí, as Kilkenny’s only Gaelcholáiste marked its 30th anniversary on Leaving Certificate results day.

The special birthday was celebrated in a relatively low-key manner with cake and decorations, but with input from students, staff, and parents, the school plans to follow the anniversary of its very first day of school with a year of celebrations as restrictions ease.

The school has gone from strength to strength in the 30 years since it first opened its doors, and looks forward to its planned move to a new state of the art campus in the near future.
Coláiste Pobail Osraí welcomed its first group of 13 students on September 3, 1991, a small group of exceptional students who began a long tradition of high academic achievement.

And though the number of students has increased dramatically in the intervening years, the Leaving Cert Class of 2021 has certainly continued the long tradition of excellence.

Celebration
With three students achieving an amazing 625 points, the maximum available, as well as excellent results across the board, the departing students were excited to catch up and contribute to the air of celebration in the school on Friday.

Principal Cathnia Ó Muircheartaigh wished the group the best of luck as they moved on to their future careers and studies, and congratulated them on their hard work and exemplary results.
As the school bade farewell to them, it also looked forward to another fantastic, busy and fulfilling year, as they mark a special milestone.
Triocha bliain ag fás!

Ras na mBan starts in Kilkenny tomorrow! What can we expect?

Off to college? Top tips for students looking to rent for the first time