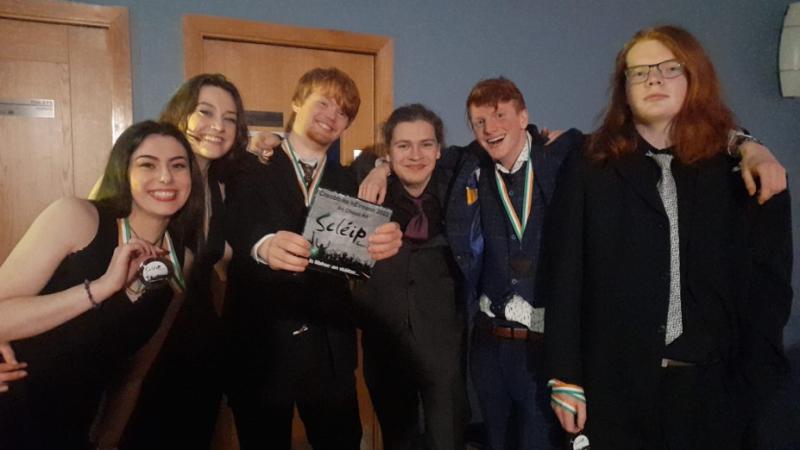 The prestigious music competition is a long-running event in Gael Linn’s calendar, and was held live for the first time in two years.

The band, all of whom are 6th year students in the school, travelled to Dublin on Wednesday 2nd February to take part in the showcase. This was broadcast live on Youtube, and the award ceremony followed.

The band members, Stephanie, Ella, Aodhán, Thomas, Tom, and Diarmuid, were faced with an agonising wait until the end of the evening, as their category was among the last to be announced. They were surprised and delighted with the win, though it came as no surprise to all who viewed their polished performance. Their winning piece was their translation to Irish of ‘Undercover Martyn’ by Two Door Cinema Club.

1st Year student Seth Ó Scanláin also put in a great performance in Wednesday’s final, playing a medley of ‘Faded’ by Alan Walker and ‘He’s a Pirate’ from Pirates of the Caribbean on the piano. He is surely one to watch in the coming years!

Well done, also, to teachers Siobhán Ní Fhearghaíl and Gráinne Sabhaois for all their hard work with the groups who competed in Scléip this year

Kilkenny rivers under threat: What does it mean, what can be done?