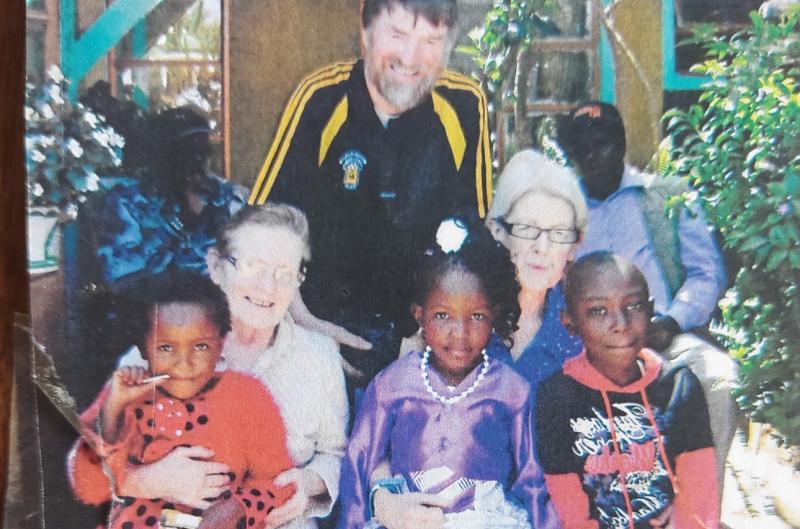 Far down along a dirt road, in a rural part of Kenya, stands Kilkenny Castle.
A world away from the ancient building that crowns our Kilkenny City, this ‘castle’ is a cow house.
But, to the people who live here, and use the building for their livestock, it is as important a palace as ever was its stately namesake in the heart of an Irish city.
While the first Kilkenny Castle was built for the wealthy to live in, Kenya’s Kilkenny Castle was built to help the poorest people make a living. And it is just one part of a project that has been made possible by the generosity of the people of South Kilkenny.

The journey from Coolagh, near Callan, to Rongai in Kenya, began with a stroke of serendipity in Australia.
Peggy Saunders lives in Coolagh, but the chance meeting occurred when she was visiting her son Paddy in Australia, more than 17 years ago.
Out shopping, Peggy bumped into a young woman who worked for her son. She explained to Peggy that she was shopping for the poor people in her homeland. Peggy was impressed that this woman was spending her own money to help others. She offered to help, and that was how Peggy was put in touch with Winnie.
She helped raise money to put Winnie through education and Peggy promised the girl that if she worked hard at her education she would get her ‘on her feet’.

This started a ball rolling that today is a welcoming orphanage with a self-sufficient farm, chickens and the Kilkenny Castle cow house, and has seen more than 50 young people avail of a secondary education that would otherwise have been out of reach for them.
Up to 60 children can live at the orphanage, which also has a medical centre. It is a shelter for children with HIV and AIDS. 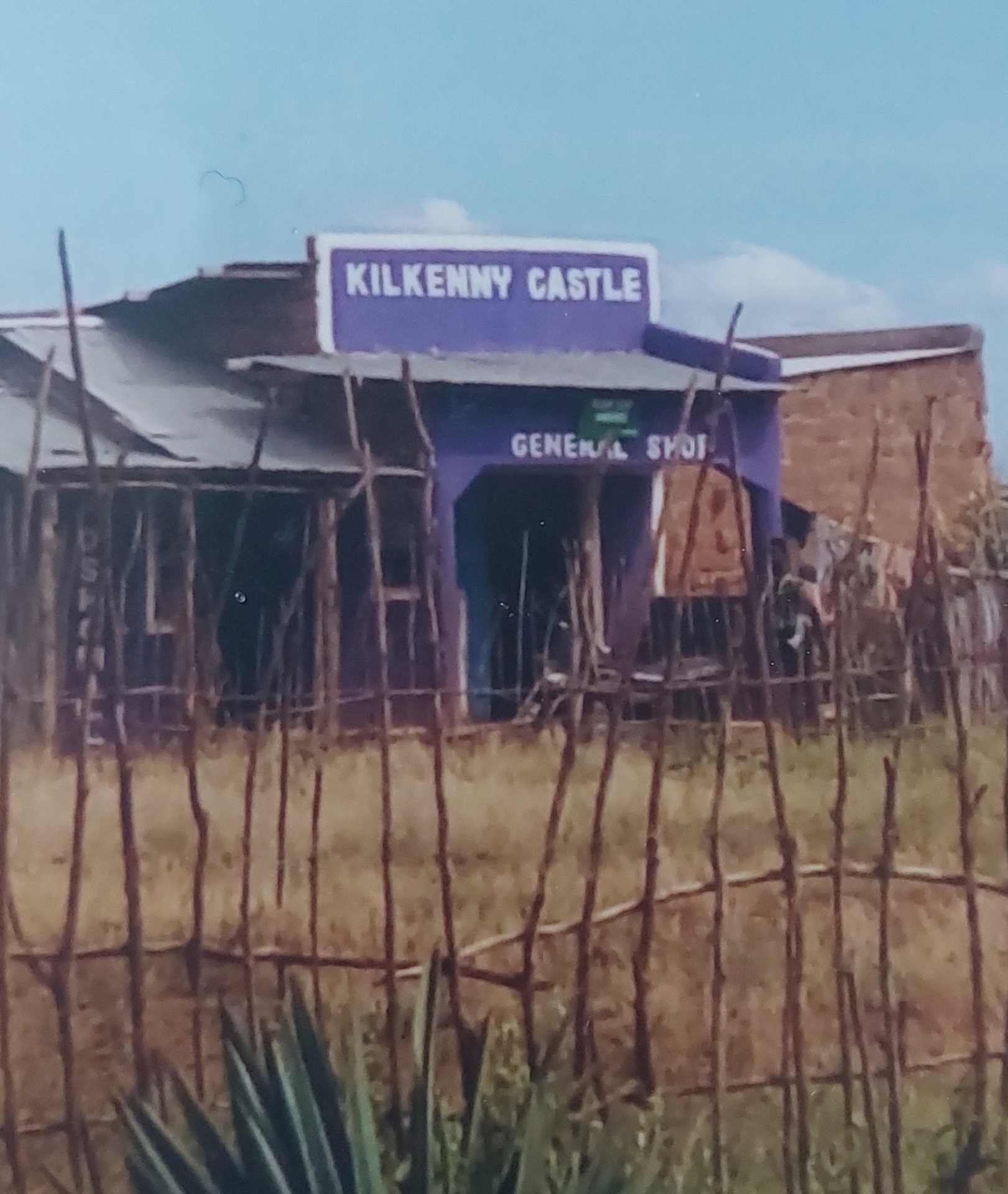 Winnie and Peggy didn’t meet in person for years, until Peggy and travelled out to Kenya for the first time, to buy land for the orphanage.
That purchase, and all the amazing feats the project has achieved, could not have been carried out by just one person, Peggy stresses. Good people were ‘sent’ to help her with the fundraising task, she believes, and they worked as a team across communities in south Kilkenny to raise money.
Carmel Ryan, Phyllis Walsh and the late Nora Kelly, along with Tom Foley, joined Peggy to form Save the African Slum Children Association. All ordinary people with their own jobs and families to care for who were introduced to a world they never expected. 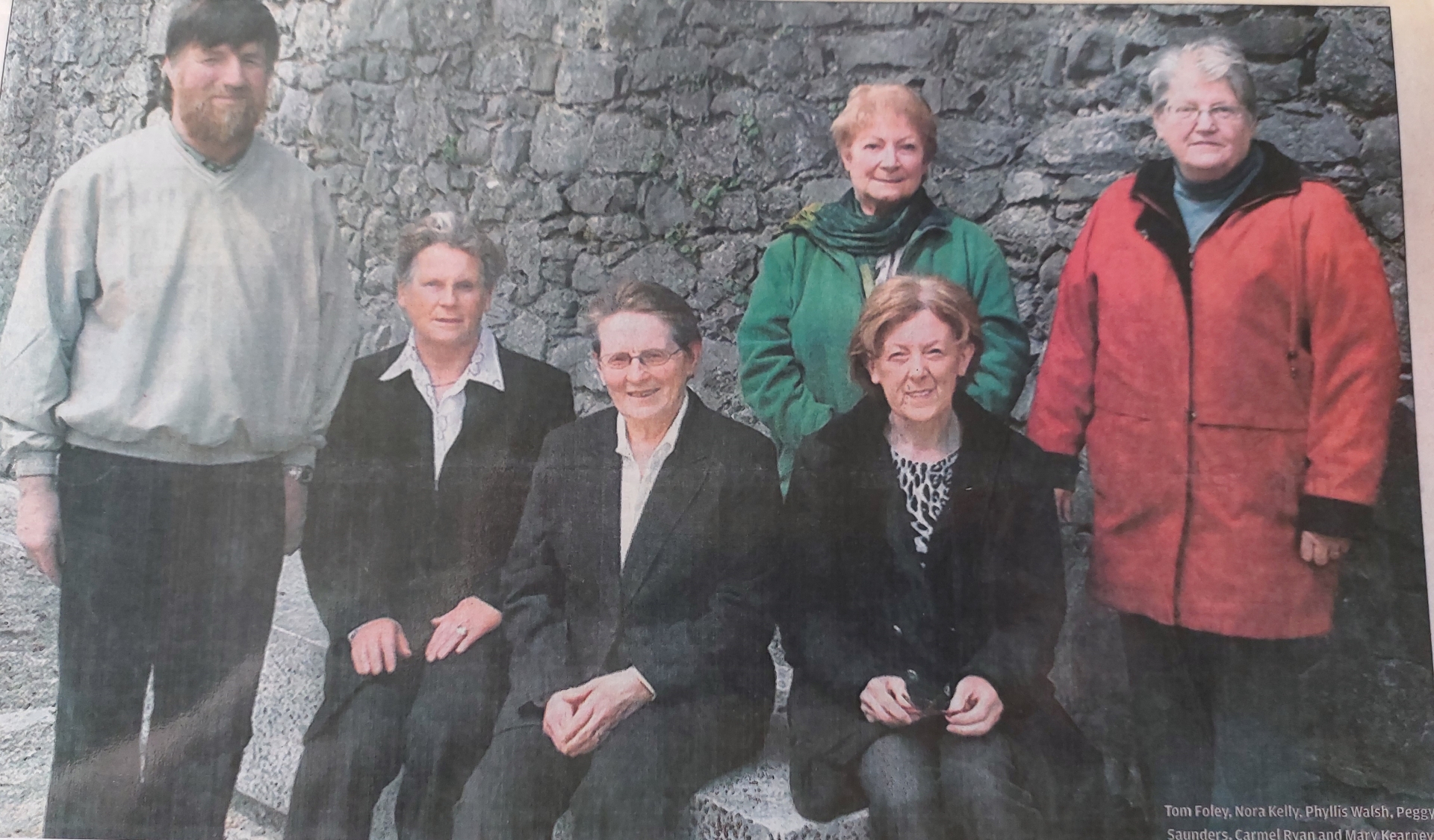 ABOVE:  Tom Foley, Nora Kelly, Phyllis Walsh, Peggy Saunders, Carmel Ryan and Mary Kearney did a lot of fundraising as a group

‘I promised’
“I never thought I would go to Kenya, but nothing was going to stop me when I promised the people!” Peggy said.
Over the years she made five visits to Kenya, and Carmel, Phylis, Nora and Tony all accompanied at times.

But that first visit was a challenge. They made contact with local Irish missionary priests, and they met the local bishop who “gave me no encouragement,” said Peggy. He was wrong to doubt the determination of the Kilkenny group.

They found a plot in Rongai, in the county of Nakuru; they met with the local village chief and arranged for local men to bring rocks from a quarry and make the building blocks. They dug drainage gullies along the dirt road into the settlement. And when the foundations were laid they rang the priest and invited him to bless the building. He couldn’t believe what Peggy and her friends had achieved.

How did they raise the money? “We ran concerts, we ran fashion shows, I was a Pointer Sister myself one time,” Peggy said. The women trained lorry drivers in Killamery for a show and fundraised every year at the Piltown Show. They even knocked on doors asking for donations. The ladies set up a stall at the Castleinch ‘car boot’ market where they still sell items to raise money for the project. Peggy’s son Paddy donated the roof of the orphanage. Tom collects scrap metal. 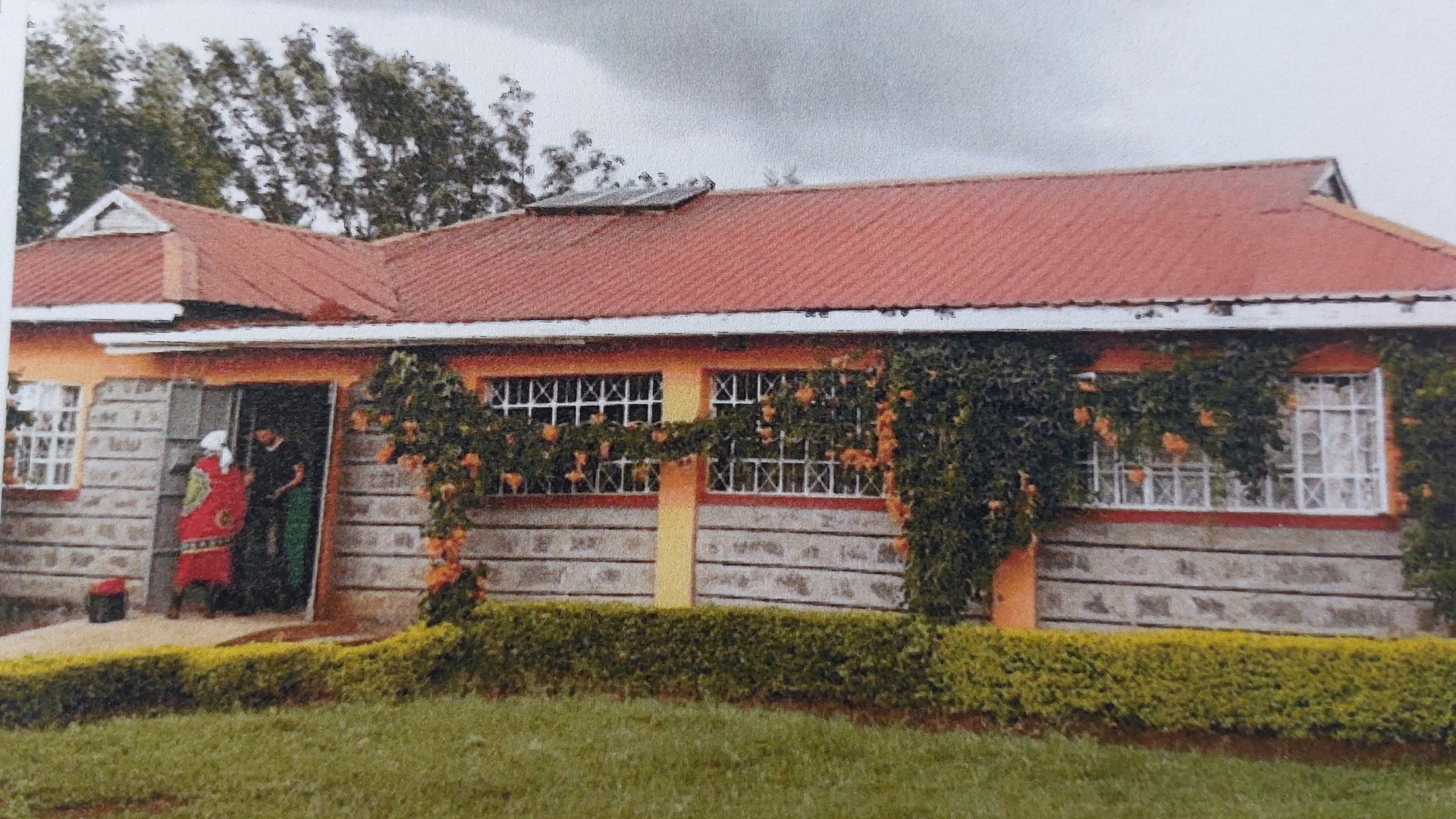 ABOVE: The Rongai orphanage

The generosity of the people of south Kilkenny was amazing. The SASCA group are so grateful for all the support they received over the years and now that they are winding down that fundraising they want everyone to see the buildings they paid for and the happy faces of the children whose lives have been transformed.
“The people of Kilkenny have been so good to us and have had faith in us that the money was going to the proper place.”

Primary education in Kenya is free, but children must wear uniforms that they do have to pay for. When the SASCA group made their visits to Kenya they brought hundreds of uniforms. They also bought a lorry to bring supplies to the orphanage.
Sadly, a few years after the orphanage was built Winnie passed away. She was only in her 30s. Her brother took over as manager of the orphanage.

The need for the Rongai orphanage was confirmed when, even before the foundations were laid, two small children were abandoned there. They were named after Peggy and her son Paddy!
The little boy and girl are just two of the many children who have been helped by SASCA.

Since the group started its work in Kenya at least 50 children have been supported through college and university.
One such lady is Sarah. When Peggy first met the little girl with one arm, she asked her what her dream was. Sarah said she wanted to be a teacher. She is now a teacher. Without the support of SASCA that education would not have been possible.

A change has come to the work of SASCA now, as the ladies get older and move on with life. Their local fundraising is winding down. The facilities in Rongai have been handed over to a local charity in Kenya, who had a small facility with doctors and nurses and are delighted to take on the responsibility of the bigger orphanage and medical centre. It’s very hard to walk away, but, Peggy said, “It wasn’t mine, it belongs to the people of Kilkenny who supported it.”

Restoring Sight
On one of her visits to Kenya Peggy met Paul, a boy who had severe facial burns after falling into a coal burner. He couldn’t afford medical care, was an outcast, and had no sight in one eye. Peggy arranged treatment and plastic surgery and now not only can he see out of both eyes but will soon have a home of his own and will begin training in a skill. He has become a valuable member of his community.

Peggy took up the challenge of helping the blind children in Rongai. Thanks to her fundraising, treatment was made available to 16 year-old Anthony who was able to go to college; brother and sister Joseph and Esther both had their sight restored; as did Richard, who is a talented athlete and will soon be moving to Germany to continue his training.
Peggy is very grateful to her nephew Rory O’Sullivan Hennessy who helped her with fundraising for this medical care. 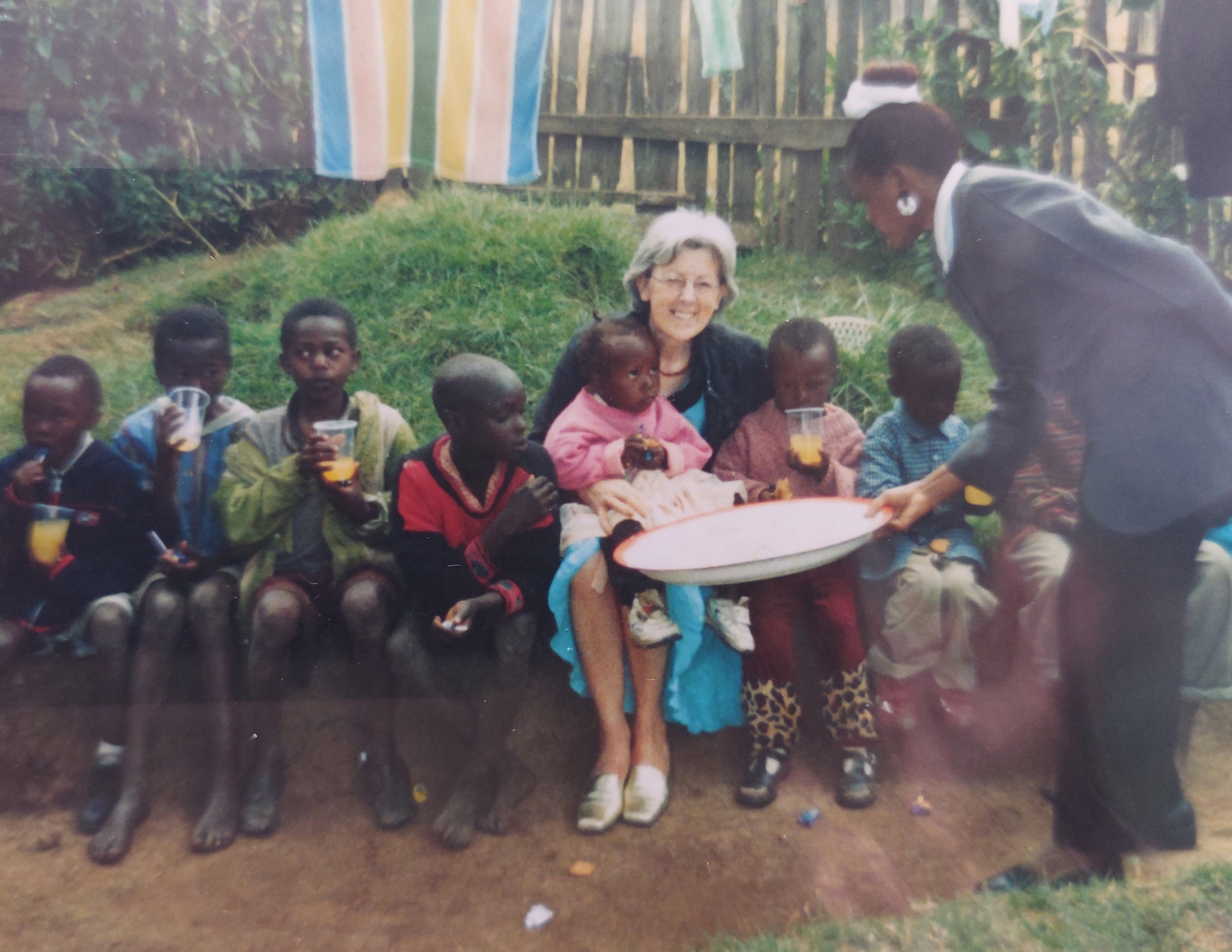 ABOVE:  Peggy Saunders with some of the children in Rongai

A miracle
“This isn’t my work, it’s God’s work. It’s a miracle,” Peggy said. The woman who started the project is humble, saying it was a group effort and she couldn’t have done anything ‘without those wonderful women who were with me’.

“They were wonderful people and they gave of their time,” she said. “Each came to Kenya in their turn and took part in concerts. They had a life they never would have had because of it.”
But what is also sure, is that a generation of children in a community in Kenya would never have had the lives they now have without the work of the wonderful Kilkenny group.

Windgap needs a bottle bank! Huge amount of cans and bottles in litter