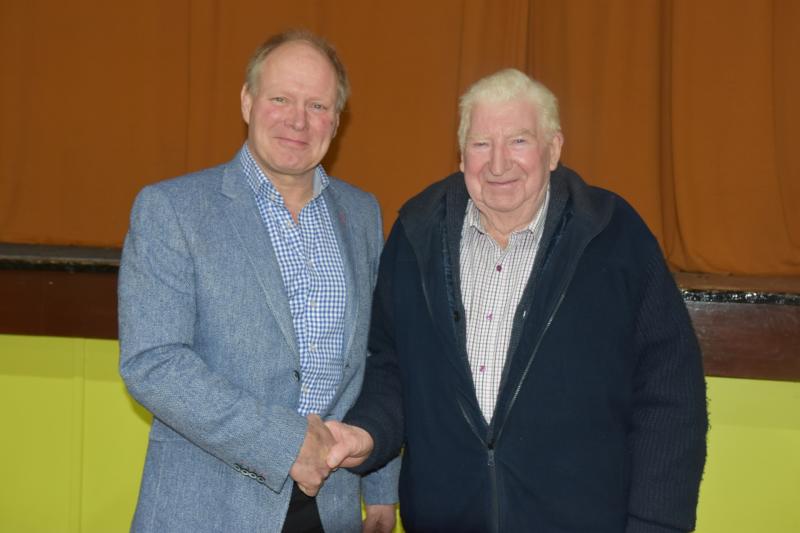 Members of the Iverk Show were delighted to hold the annual general meeting in person on February 7.

With some members joining on Zoom, the atmosphere was buzzing as the committee looked forward to and started planning for the show on August the 27th next.

Chairman Robert Dowley welcomed everyone, especially some new members. Sympathies were expressed to members who passed away during the year.
Many tributes were expressed to former President and Chairman Joe Malone. Joe was a wonderful ambassador for the Iverk Show and will be sorely missed.

Anne Marie Power, auditor for the Show, presented the financial statements for the year. As there was no show for the past two years they were approved by the meeting without any difficulty.

Show Planning
In his address, Robert Dowley said he was aware that we all have been through a difficult two years. Planning for this year’s show gets under way now and he acknowledged it will be difficult to pick up the reins where organisers left off in 2019.

He thanked outgoing president Jack Kearns, despite not have a show during his tenure, for all his support and the planting of a tree in the show grounds to mark the date of the first cancelled show. It will be there for all visitors to see in years to come when hopefully Covid will be a forgotten memory.
Robert said they are looking for new members and that they will always be welcome. “We are certainly not a closed shop as some people perceive”, he said as he encouraged everyone there to bring a new member along during the year.

QUIZ: How well do you know famous people from and/or associated with Kilkenny?

Committed sponsors
Robert said he has been in touch with a number of our sponsors and everyone is very positive and looking forward to being back in Piltown again. Some sponsors have increased their commitment to the show, anticipating a superb day. There is a lot of good will out there, he said.

‘Man of the Match’
A tradition that has developed during the past 20 or so years is for the chairman to nominate his “Man of the Match” to a member who goes the extra mile in duty to the show. Despite having no show Robert nominated Norman Storey for the work he is doing behind the scenes on the history of the show. Norman has trawled through so many archives held in newspapers, especially the Munster Express, the National Library among others, gathering and formulating as much information as he can. Norman has already put together two booklets on the history of the Iverk Show which is the oldest in the country and began in 1826.

New President
The new president has a long association with Iverk Show. His first involvement with the show came literally by accident. “I was driving to Kilkenny when a truck carrying horses to Iverk Show crashed into the side of the car. I had to leave the car and the driver took me on the show with him. When I arrived at the gate I was met by Jamie Norris, from Turkstown who said to me - here stand in for me while I go for a break. I’ve been up since 4am this morning”. And that is 70 years ago. Ned has been involved on the gate since, in latter years as chief steward.
Ned delivered coal in the area for many years. He would not be busy during the summer so he brought the truck to the show field to use as a platform to stand on while organisers erected the lean-to stalls for the vegetable, fruit, baking and flower exhibits.
He said: “a man told me many years ago that the house I now live in was the site of the very first Iverk Show way back in 1826 in Bessborough Park”. Amazing. Congratulations Ned.