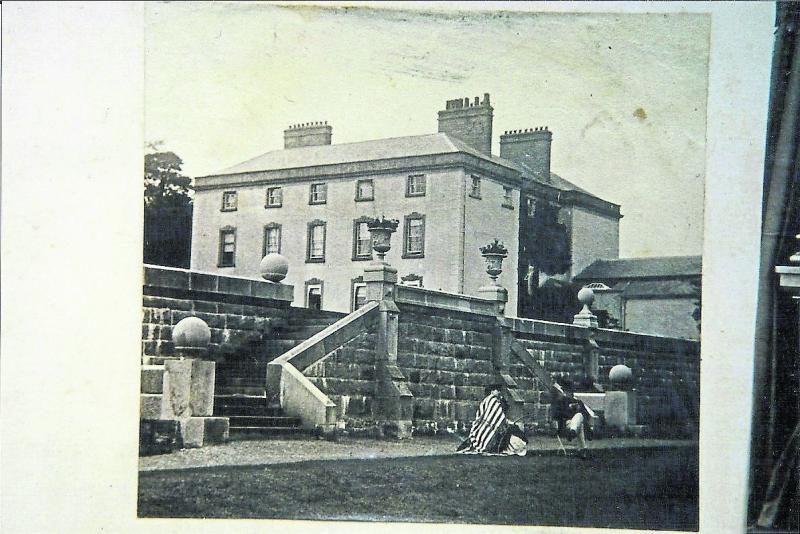 Two large granite spheres which were in all probability commissioned by the Rt Hon Col William Frederick Fownes Tighe (died 11 June 1878) and his wife the Lady Louisa M. Lennox (died 8 March 1900), as ornaments for the steps of the Winter Garden, are to be returned there.

The steps of the terrace which is the rear or garden front of Woodstock House, led down to what was the croquet lawn and canal. The granite for the orbs or spheres, is understood to have been quarried locally, as was the stone for the entire retaining terrace-wall, which was built about 1860.

Inistioge woman Joan Fleming, née Waters, inherited the spheres from her mother, Mrs Mary Waters, upon the latter’s death in the early 1990s. The spheres were in the yard at Moate House, High Street, Inistioge, which was the Waters family home in the late 1950s.

In 1863, Thomas Lacy of Wexford, did a tour of Ireland which he called ‘Sights and Scenes in our Fatherland’ (pub. London and Dublin, 1863). He visited Inistioge and Woodstock and wrote very well of both places, but for him Woodstock was exceptional :

‘My last visit to this charming place was made in the early part of October 1860, at which time considerable improvements were being carried out on the grounds immediately before the south facade of the mansion.

‘These works consist of elegant parterres, or panelled gardens (Winter Garden), intersected by fine walks, that divide the extensive quadrangular space into four perfect squares which are sunk below the level of the walks; the whole being surrounded by a cut stone boundary, ornamented at certain intervals with bronze vases and urns, which, as a matter of course, will be filled with the rarest plants and flowers.’

From another source we know that Charles McDonald a Scottish professional gardener, was brought to Woodstock from Trentham in 1860 to supervise the Woodstock improvements. Earlier still McDonald had worked at Dunbrobin Castle, the Scottish seat of the same dukes of Sunderland whose family name was Leveson Gower).

Some 200,000 cubic yards of earth had to be removed to create the terrace in which the Winter Garden was laid out. Today it would take 1,000 trucks to move that quantity of earth.

It is understood that the two spheres or orbs had been brought down from Woodstock c. 1952 in the wake of a garden auction of outside and miscellaneous effects, in the yard adjoining the ‘Big House’.

There had been previous outside auctions at Woodstock of effects, notably one in 1912. The only household effects in this auction were 2,000 books but it is not clear if they were in fact auctioned, as a considerable quantity of books from the famous Woodstock library were known to have been lost on the night of the 1-2 July 1922, when anti-treaty forces fired the mansion.

Fortunately most of the family heirlooms, notably the portraits and silver and some of the key items of furniture, had been removed to England when the family left Woodstock about this time. One of the reasons for their departure in 1912, was the recent loss of their then only son ‘Fritz’Tighe who died a very young boy.

It seems that the Tighes never considered rebuilding the house, though the two wings did survive and were lived in for many years. The famous Turner iron steps which led from the Winter Garden to the main drawingroom, were moved from the garden front to the entrance front in 1922 to facilitate access to the wing adjacent to the stableyard.

This is not the first time that fittings which once graced the pleasure grounds at Woodstock have been gifted to the once world-famous gardens. About 20 years ago Dr Don Carr and his wife Dorothy, generously presented their garden gates which were known to have come from Woodstock. They had probably been bought by the late Mr Pat Foley at the 1952 dispersal auction, from whom the Carrs bought the bungalow residence, when they retired from England to live in Inistioge. Don Carr was Irish-born but had spent most of his working life in the United Kingdom. During the last war he joined the British army and as I understand it, it was through the army that he acquired his later medical training.

Many other items from Woodstock are known to exist in the Inistioge district. A well-known local farming family, close friends of my parents, have two very large orbs in their garden, while other items are known to be further afield.

Perhaps the most notable item from the Woodstock Garden is the armillary sphere (a model of objects in the sky on the celestial sphere) which today is a feature of the Millennium Garden, adjacent to the late 16th century house or urban tower which has been this summer past, the subject of conservation work by Kilkenny County Council. Further work is planned on this building, one of two such 16th century buildings to survive in the village.