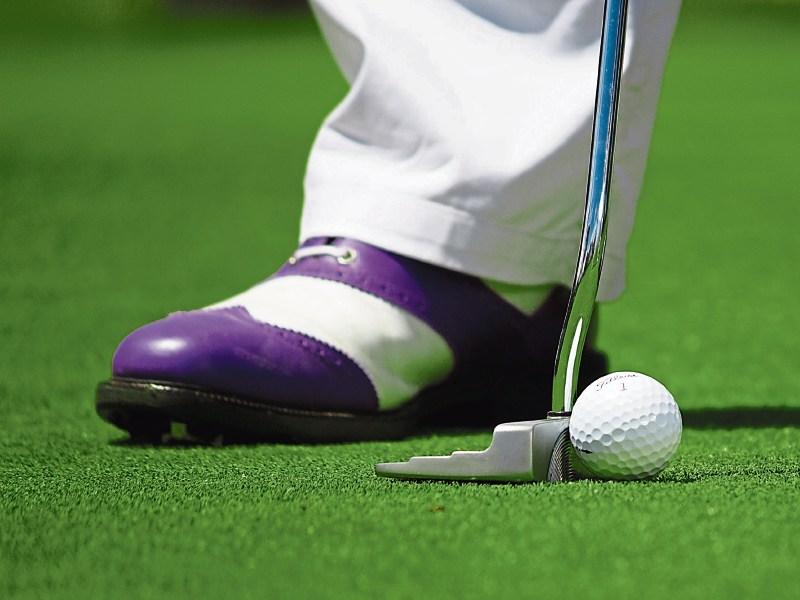 The drive-in will be  at 10.45am after which there will be a shotgun start for a 13 hole mixed team event.

Golf will be followed by a hot plate in the Clubhouse.  Cost is €15, including hot plate.

Members interested in playing should put their names on the notice board inside the bar door.

No defections  after 5pm as the draw for the teams is scheduled for 6pm  on the Saturday.

The drive-in is  sponsored by Jimmy Bolger.

SUBSCRIPTIONS: Members will have received notice that their annual subscription are  due.

Those  who wish to avail of the Fairway Credit option must have the relevant forms submitted to the office by February 13.

This scheme allows members to spread their payments over 10 months.

Aon Insurance are continuing the private insurance for golfers again this year.

Those wishing to join - fee €27 - should have the fee paid before the close of business on March 3.

COMPETITION RULES: The Men’s Club Committee has implemented a new club bye-law for all of this year’s qualifying club singles competitions.

This is due to the consistently large volumes of no returns for singles competitions which is having an adverse effect on  competition standard scratch and may in turn effect all  handicaps.

All cards in club singles competitions (complete or not) must be returned in the designated scorecard box after being entered on the computer.

TEAM NEWS: The club Captain, Rob O’Shea, has announced the managers of the teams who will represent Kilkenny golf club in the various All-Ireland competitions this year.

The regional qualifiers will be played in Kilkenny on the weekend of June 24/25. Kilkenny  face New Ross in their opening match.

In 2016 Kilkenny were leading qualifiers in the Area finals. They took the scalps of Waterford and Carlow to earn the right to play Rosslare in the final, only to suffer an agonising defeat.

Barton Shield -  Anthony Cleere and Brendan Power (two foursomes pairings, playing off scratch, with the tie being decided by the aggregate score).

Kilkenny play Naas in the regional qualifiers at The Heritage on Saturday, May  20.

In 2016 the club qualified for the area semi-final, but lost to  Naas. The match was  decided in extra time.

Junior Cup -   Kieran Wall and  Gus Carey (five singles matches with a minimum handicap not less than five in the previous year, playing off scratch).

The area qualifiers are  in Portarlington on Saturday, June  3. The top four progress to the semi-finals/finals on the  Sunday.

In 2016 Kilkenny were the leading qualifiers. Then they  beat Castlecomer and Rathdowney to reach the Leinster finals in Tullamore, where they lost the final to The Castle 3-2. The Castle won the final, beating Tralee and Lurgan.

Barton Cup -  Liam Cody  and  P.J. O’Reilly (any combination of players with a combined handicap of 14, will play five foursome matches).

Kilkenny will be away to Borris in the preliminary round which must  be completed by March 24.

In 2016 Kilkenny were beaten in round one by Mount Juliet.

Jimmy Bruen -  Derek Shelly and Luke Kelly (five foursome pairings, playing off scratch. Minimum handicap of six and minimum combined of not less than 17 based on 2016 handicap).

The regional qualifying round is scheduled for New Ross, where Kilkenny  play Rosslare on Saturday, June  17.

In 2016 Kilkenny qualified for the final  on Saturday by finishing second in the stroke play session. They faced Athy in the area final but were beaten 3-1 with the one match halved.

Provincial Towns -  Fergal Cantwell and John Byrne (a minimum handicap of nine, there will be a total of nine singles matches played on a home and away basis).

Kilkenny have  drawn Callan in the first round and will have five matches at home and four in Callan.

In 2016 Kilkenny suffered defeat against Rathdowney in the first round.

Pierce Purcell -  Seamus Rochford and Brian Cullen (comprising 10 members, they will play five foursome matches off scratch. No player is allowed if his handicap was less than 12 the previous year. The combined handicap shall not be less than 27).

The regional qualifiers are in Gowran on Saturday, May  13. The top four progress to the semi-final/final on the  Sunday.

In 2016 Kilkenny narrowly failed to make the semi-finals. They  finished fifth in the qualifiers.

Duggan Cup -  Dick Curtin and assistant (the draw for this competition has not been made. It  is for golfers over 50).

In 2016 Kilkenny didn’t enjoy any success. They made an early exit when beaten by Gowran.

JB Carr -   Willie Leahy and  assistant (the draw  has not been made. The competition is for golfers over 60).

In 2016 Kilkenny had their best run ever, beating Gowran, Mount Juliet and The Heath only to suffer defeat against  Athy.

Irish Mixed -   Frank Dalton and  Catherine King (five pairings with a minimum combination of 19 and a maximum of 27. Players get half of their combined handicaps).

Kilkenny are at home to The Heritage in the first round. They play three matches at home.

In 2016 Kilkenny were  beaten by Castlecomer in the second round.

Fred Daly and IJF -  Mark Grant and Ollie Cullen (the under-18 junior foursomes (two pairings) will play Carlow on Monday, July 3 in The Heath.

The draw for The Fred Daly has not been made.

Kilkenny play Carlow in Carlow in the first round of the on or before April 23.

If a player wishes to be considered for any of the above panels, he/she should contact the relevant manager.

There will be a meeting of all team managers on Wednesday, February 8 (7.30pm).

COURSE NEWS: With the soft conditions at present, the course is ‘cutting up’ to some degree.

Members should bring a bag of sand mix with them to repair divots. They should  remind partners to do likewise.

NEW TEE: Work is scheduled to commence this week on the new tee at the 12th hole. This will  result in the ladies tee being relocated to the left and forward of the gents tee.

Members are requested to exercise caution in the vicinity of these works.

Holes 11 and 12 will continue to be played during this time.

SNOOKER: The snooker doubles final will be contested by  Alan and Ciaran Snype and Liam Barry and Andy Melay.

HOLE IN ONE: It has been agreed with Club pro Jimmy Bolger that from now on, a ‘Hole in One’ will receive a third of the ‘Two’s Pot’ for that competition.

The  balance will be shared between those members scoring a ‘Two’.

If there is more than one ‘Hole In One’ on the day, they will share the 1/3 amount between them.

The next competition is on  Thursday. Draw closes at 11.15am

Senior Captain, Reay Brandon’s drive-in has been put back by a week to Thursday, February 9.

The forecast for Wednesday and Thursday is for rain. No buggies will be allowed on the course for members own protection and course maintenance.

Members subs are now due.

Next senior ladies gold is on Thursday (9.30am) for immediate tee off.

All are reminded that the annual subscriptions are now due.