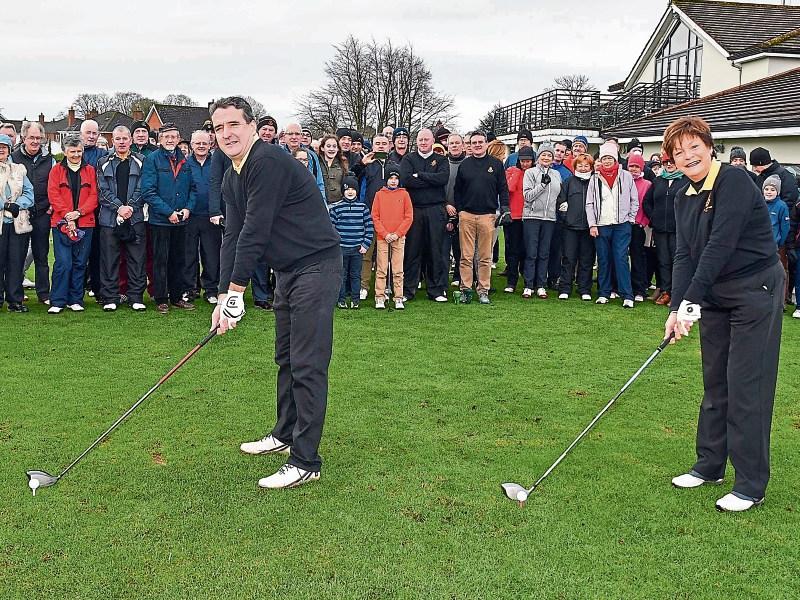 A large number of family, friends and relatives joined the 120 golfers on a bitterly cold but dry day to wish Rob and Liz every success  their year in office.

Rob and Liz hit immaculate drives in the heavy  pressure of the occasion, splitting the fairway, and they received loud applause and roars of approval from the assembled crowd.

Liz and Rob said they were  extremely grateful to all who turned up on the day to offer their support and best wishes, and in particular those who played in the Champagne Scramble.

SUBSCRIPTIONS: Members have received notice that their annual subscription are  due. They must be paid by the end of February.

Members were reminded  that the new category introduced last year is still available. Intermediate membership is open to golfer aged between 25 and 29.

Aon Insurance are continuing the Private Insurance for golfers again this year.

COURSE NEWS: Work continues on the new tee at the 12th hole, with both the gents and the ladies tees beginning to take shape.

It is anticipated that the works will be completed by St Patrick's weekend and the new tee will be open for  play by the Easter weekend.

Members are requested to exercise caution in the vicinity of these works.

Holes 11 and 12 will continue to be played during this time.

SNOOKER: The doubles final was played on Friday night and it turned into a marathon affair.

Play lasted  over three hours before Andy Melay and Liam Barry emerged successful over the father and son partnership of Alan and Ciaran Snype .

Play  was of a high standard with the match won on the black ball in the third frame, itself a compliment to the Handicap Committee.

The first round of the singles is continuing with all matches to be finalised before the end of the week, February 17.

Players should note that all round two matches are scheduled for completion by February 28.

Already there have been some surprises with defending champion Brendan Wall beaten by his namesake, Patrick and Anthony Cleere defeating his brother Paul.

Each 'Two' received €43 credit in the Pro Shop.

Reay drove off, in style, with his customary straight drive down the middle of the fairway at the first hole under some serious prevarication and barracking from his many colleagues who joined him on the tee.

Some serious instruction and advice was offered by honorary member and photographer Michael Cantwell.

Seventy members attended the drive-in and two 'phoned in with apologies and good wishes.

Captain Reay appreciated the support shown by all.

The next competition is on  Thursday. The draw closes at 11.15am.

Members subs are now due.

PRO SHOP: The Pro Shop has installed  a new coffee making  machine for the use of members.

Players  can purchase coffee prior to playing. There is a  choice of Espresso, Cappuccino, Latte, hot chocolate or tea. All  available for €2.

The winner of the Special Edition Bubba Watson Ping G driver in the Christmas raffle was Ciarain O'Brien (19), a visitor from Killeen golf club, Naas.

A donation from the proceeds of the raffle  will be made to The Cois Nore Centre, Kilkenny in the coming weeks.

The next senior ladies’ golf is on Thursday. The draw is at 9.30am for immediate tee off. The annual subscriptions are due now.