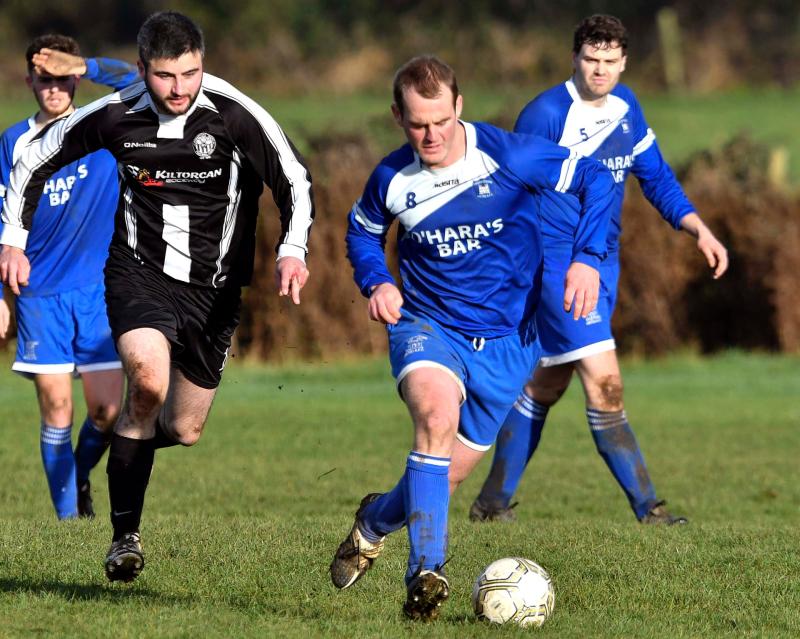 With their rivals in Shield and Cup action, Thomastown United A made good use on their chance to extend their lead at the top of the Premier Division table.
United had to work hard for the win but did enough to beat Callan United 2-0 and go six points clear at the summit.
With second-placed Evergreen A on Maher Shield duty and Freebooters A in action in the McCalmont Cup, Thomastown knew a win was vital to keep their title hopes on track.
Callan made life difficult, but a first half goal from Mick O’Neill steadied Thomastown’s nerves. A second half strike from Dessie Walsh completed the win, United’s ninth from the 10 league games they have played to date. Victory also earned the team their sixth clean sheet of the season, an impressive addition to their campaign.
The destination of the Premier Division title is very much in Thomastown’s hands. Their last two games of the season are at home – to rivals Evergreen A and Freebooters A.
Spa Take Big Step
Spa United took a big step towards securing promotion from Division Two when they beat Brookville 3-1.
The Johnstown side shone in the Scanlon Park lights on Saturday evening, grabbing the result which saw them leapfrog Newpark into second place behind champions-elect Bridge United.
Willie Brennan opened the scoring for United, but while Brookville levelled matters before half-time second half goals from Ciaran Behan and James Whelan gave Spa all three points.
Spa are now a point ahead of Newpark and have two games left to play. They must take on Ormonde Villa and River Rangers. Newpark, who also have two games left, must also face Villa as well as River Rangers.
East Open Gap at Top
East End United have one foot in Division Two after opening a six-point gap at the top of Division Three.
The Bennettsbridge side made the leap after beating Clover United B 2-0 in Rathdowney. Goals from the long-serving Paul Murphy and Brian Lannon gave East End the result that saw them double their advantage over title-chasing rivals Freshford Town.
With only one game left to play, East End must watch and wait as Town and Evergreen 46 play their catch-up games in the promotion race.
Bridge Win
Bridge United’s dreams of a League and Cup double are still on track after they eased into the Ken & Michael Byrne Cup semi-finals.
Bridge, who are within touching distance of the league title, strengthened their Cup hopes when they beat Ormonde Villa 6-1 on Sunday.
Eoin Kavanagh hit a brace for the Goresbridge side, as did Martin Cummins. Sean Murphy and Niall Lynam helped heap more misery on the city side.
McCalmont Cup
Freebooters were the biggest winners of the weekend as their A and B teams grabbed a goal glut in the McCalmont Cup.
The A team blasted their way into the last 16 of the Cup when they beat Evergreen 46 8-0. Craig Hayes led the way on the Kells Road, helping himself to a hat-trick for Graham Doyle’s side. The rest of the goals were equally spread among the team as Emmet Nugent, Joe Banville, Shane Maher, David Rice and David Doyle got their names on the scoresheet.
There were goals aplenty for Sean Doyle’s Freebooters B as they also comfortably won their city derby. St John’s were no match for the young Blues, who won 5-0.
Gavin Walsh’s brace was added to by goals from Charlie Deegan, Andy Walsh and Mohammed Zoni as they moved into the next round.
River Rangers roared their way into the last 16 of the Cup when they beat Castlewarren Celtic B 4-0.
Two goals from Darragh Murphy played a big part in the win on the Kells Road, while second half goals from Richie Keoghan and Ben Hayes sealed their passage into the last 16.
Elsewhere Clover United A beat Fort Rangers 3-0, while Deen Celtic A had a bit of a battle on their hands before earning a 2-1 win away to Thomastown United B.