'Comer show real character as they snatch Roinn B title 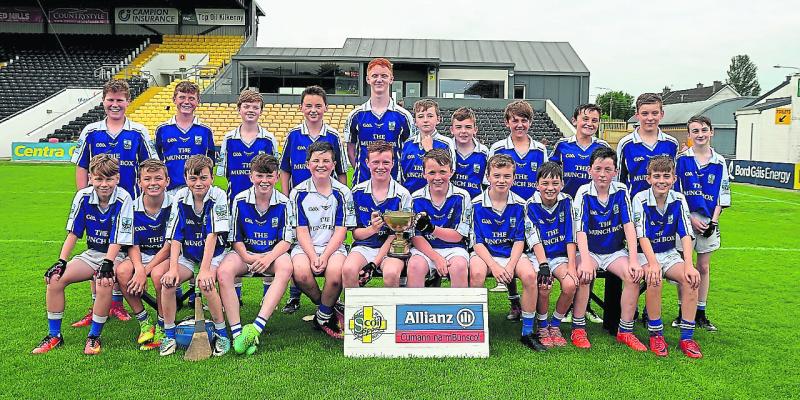 Three second half goals were all important for Castlecomer and Firoda schools as they saw off the gutsy challenge of Tullogher-Rosbercon when claiming back the Paddy Hennessy Cup (Roinn B) for the first time since 2001.
Trailing by four points at half time, the young ’Comer lads claimed three major scores at vital times in the second half to turn things around.
And with their defence holding firm at the other end they docked in safety and had five point to spare at the long whistle.
It was Castlecomer who started faster. They put four points on the ’board during the opening 10 minutes.
James Coogan was causing early havoc in the Tullogher defence, and he shot the first score after two minutes.
This was quickly followed by two points from Shane Holden and a point from Michael Brennan.
At this stage it was all ’Comer and they threatened to run riot as Tullogher tried hard to get into the game.
However, Marty Murphy and Sean Guiney started to win the battle at midfield and Tullogher opened their account with a Murphy point.
As ’Comer came under pressure, they conceded a few frees and Marty Murphy punished them each time.
Slowly but surely the southern lads pulled the deficit back with Niall Mooney and Ronan Guiney also scoring.
Eventually the ’Comer defence cracked under the pressure, and when Marty Murphy was fouled as he ran at the defence the referee Paddy Neary had no option but to award a penalty.
Marty Murphy stepped up and gave goalie Conor O’Sullivan no chance in the ’Comer goal with a top class drive.
The northern boys did manage another point before half time, but it was Tullogher who led at the break by 1-6 to 0-5.
Castlecomer started the second half brightly, but it was Tullogher who registered the first score, a Marty Murphy point.
Shane Holden responded for Castlecomer and during a five minute spell the game turned on its head.
First a long Michael Brennan strike dropped dangerously in and the flight of the ball fooled everyone before the ball ended up resting in the corner of the net to leave a point between the teams.
Tullogher thought they had scored at the other end immediately afterwards, but a free out was awarded.
Within two minutes James Coogan latched on to a ball for Castlecomer. He made a small bit of room and blasted to the net.
’Comer were ahead!
The teams traded points as Niall Mooney and Ronan Guiney swapped scores with Shane Holden and a beauty from Cathal Dunny.
In The Balance
The game was in the balance now, but the defences were fighting every ball with full-backs Jack Coogan and J.J. Ryan notable in the way they marshalled their respective defences.
With five minutes left Castlecomer delivered the killer blow.
Again it was captain Michael Brennan who was to the fore. He pumped in a long delivery from the middle and despite the best efforts of James Cummins, the cruel bounce saw the ball hit the back of the net.
The wind was knocked out of the Tullogher-Rosbercon lads for a moment, but in fairness they redoubled their efforts in a bid to save the day.