Kilkenny handball: all eyes turn towards the US for World Championships 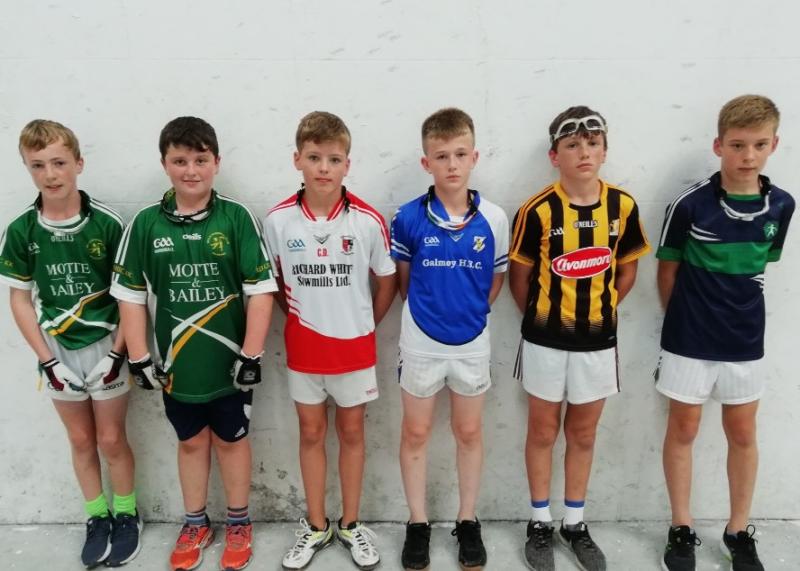 Competitors at the county under-12 singles championships in Clogh

This week Irish handballers will put the finishing touches to their training schedules as they prepare to travel to the US for the World Championships.
Held every three years, this time it’s the turn of Minneapolis, Minnesota to play host to the biggest tournament in World handball.
There is the added bonus this time of the US National championships being run in conjunction with the Worlds.
With over 250 players from Ireland travelling to the US, there are very strong indications that the Irish will maintain their stranglehold on the main events which they have dominated for a number of years.
From a local point of view there are a number of players making the journey, with Clogh’s Shane Dunne part of the official Irish team as he attempts to claim the boys 19 and under title.
Local action
At local level the main action over the last couple of weeks was mainly focused on the county juvenile championships and the Leinster Open tournaments.
In the county juvenile 60x30 singles grades, Harry Delaney (Kells) won the under-14 title when defeating Kyle Jordan (Kilfane).
Aishling Cooney (Clogh) claimed the girls under-13 crown when beating Eimear Barron (Windgap) and Conor Doyle (Windgap) was an impressive winner of a very competitive boys under-12 grade.
This week the singles championships will be completed and the doubles finals will also be played.
On Saturday, Kilkenny venues played host to the provincial tournaments organised by the Leinster Handball Council.
In Talbot’s Inch, the Masters doubles tournament was won by Noel Holden and Tom Dooley, and the under-17 singles grade was an all Wexford final with Diarmuid Moore overcoming Dean O’Neill in a close affair.
Came out on top
At Kilfane the Grade B doubles event was won by Ivan and Myles Carroll, Kildare with local pair, Dylan Caulfield (Kilfane) and John O’Neill (Goresbridhge) the runners-up.
In the boys under-15 grade, Sean Barron (Windgap) came out on top when defeating Luke Dunphy (Wexford) in the decider.
In the girls under-15 tournament Nathania Jackson (Windgap) was a beaten finalist against Jodie Keeling (Wexford).
At Clogh the men’s A tournament was won by Dublin’s Ian Griffin and Michael Carrie, beating Jerome Willoughby and Chris Doyle (Wicklow).
In the girls under-17 grade decider, Abby Tarrant (Kildare) came through against Aoife Brophy (Laois).
Juvenile doubles fixtures
Rules - all players to be at venue for 6.45pm.
Under-12 boys and girls 3x15 aces - ball- Challenger 2 blue ball; girls front line is short line and back wall is in play. Boys full rules.
Under-13 boys and girls 3x 15 aces -ball- Challenger 3 is the new Green Ball.
Under-14 boys and girls 3x15 aces - ball- Challenger 3
Under-15 boys and girls 3x15 aces - ball- adult for boys and Challenger 3 for girls
Under-16 and 17 boys and girls 21x2 and tie break to 11 if needed; -ball- adult for boys and Challenger 3 for girls
Thursday at Clogh ( 7pm), boys under-12D, A Kells 1 v Clogh 1; 1 Windgap 1 v Kilfane 2; 2 Kilfane 1v winner A.
Final - winner 1 v winner 2.
At Talbot’s Inch ( 7pm) boys under-14D, A Goresbridge v Mothel; Kells 1 v Clogh; Kilfane v winner A.
Final - winner 1 v winner 2.
Friday at Kilfane (7pm) under-13 doubles, A Dylan Dungan/Conor Power, Mullinavat 2 v Windgap, game 1; 1 C.J. Fitzpatrick/Eoin Dempsey, Mullinavat 1 v Clogh, game 2; 2 Kilfane v winner A, game 4
Boys 15D, 1 Kells v Clogh, game 3.
Final - Windgap v winner, game 5.
At Clogh (7pm) girls 12D, Clogh1 v Kilfane 1, game 2; Kilfane 2 v Galmoy 1, game 3.
Final - winner 1 v winner 2, game 5.
Girls under-14D, Clogh v Mullinavat, game 1; Windgap v winner 4.
Final - winner 1 v winner 2, game 5.