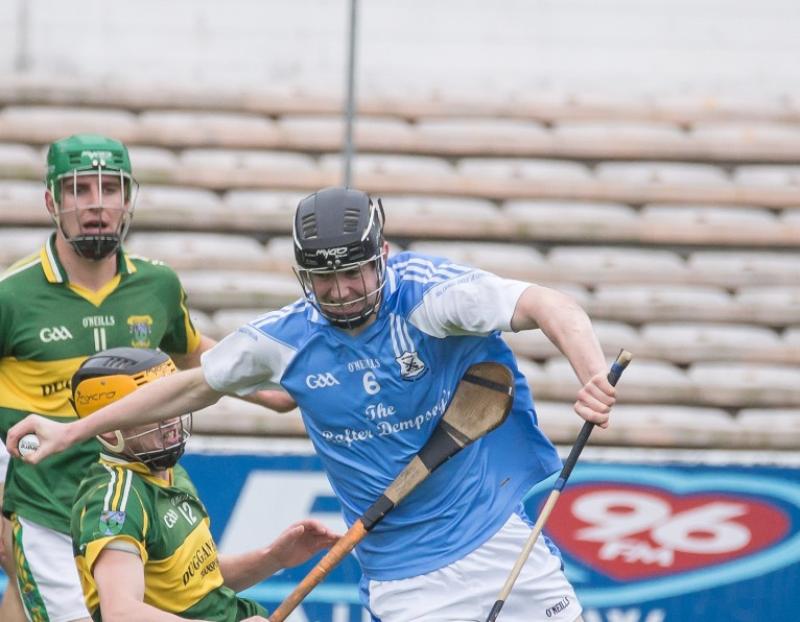 Conor Flynn was secure in the heart of the Graigue defence

Graigue-Ballycallan played well, but still they needed a 63rd minute point from free taker, Conor Murphy, to secure victory over spirited Tullogher Rosbercon in the Kilkenny intermediate hurling league in Ballyhale today.
Graigue were sailing when Willie O'Connor took full advantage of an error by the 'keeper to plant the ball in the empty Tullogher net in the 40th minute, and then immediately Conor Murphy threw over a free to leave them a massive 2-16 to 0-9 in front.
However, wind assisted Tullogher, with Billy Ryan a tower of strength as the new centre-back and Shane Ryan, Conor Hennessy, Cian O'Donoghue and Walter Walsh hurling very well in front of him, powered back.
An unaswered take of 1-4 between the 44th and 52nd minutes, the goal a cracking individual effort from Walter Walsh, lifted Tullogher spirits no end. And when the same Walsh claimed a second goal with a little over one minute of normal time remaining the deficit was back to 2-17 to 2-14.
Up popped Conor Murphy to shoot his 12th point of the match to make sure Graigue registered their third win which leaves them second in Group A behind leaders, Tullaroan.
Graigue, with Billy Ryan torturing the opposition and claiming a goal, played very well during the opening half when their strike rate was 100% accurate. They went in for the rest leading by 1-12 to 0-8 after their attack, in terms of hurling and pressing of the opposition, had played really well.
They continued to push the pace, upping their advantage to 13 points at one stage (2-16 to 0-9), but when they lost their way for a while, Tullogher nearly made them pay in the end.
SCORERS: Graigue-Ballycallan - Conor Murphy (0-12); Billy Ryan (1-1); Willie O'Connor (1-0); Sean O'Dwyer (0-2); Shane Butler, Sean Ryan, Tom Dunphy (0-1 each). Tullogher Rosbercon - Walter Walsh (2-0); Cian O'Donoghue (0-6; Conor Hennessy (0-4); Richard Dollard (0-2); Shane Ryan, John Cotterell (0-1 each).